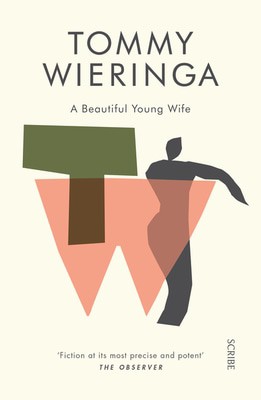 'He had never married and had never been with one woman for long; he had always remained a collector of first times.'

Edward Landauer, a brilliant scientist in his forties, meets a beautiful young woman. She is the love of his life and, when the two marry, he is the happiest man in the world. But Ruth's beauty and youth cannot stop him growing older. After the birth of their long-awaited son, the 'happiness, delicate like filigree' turns into something new, and Edward no longer recognises his great romance nor the woman who induced it.

Here's what you say about
A beautiful young wife - Tommy Wieringa.

Tommy Wieringa was born in 1967 and grew up partly in the Netherlands, and partly in the tropics. He began his writing career with travel stories and journalism, and is the author of several internationally bestselling novels. His fiction has been longlisted for the Booker International Prize, shortlisted for the International IMPAC Dublin Literary Award and the Oxford/Weidenfeld Prize, and has won Holland's Libris Literature Prize.

'You don't so much read this novel as take it in intravenously. It goes straight to the blood - brief, brutal and beautiful.'

'An examination of the ageing male heart - a dissection as subtle and tender as it is, ultimately, unnerving … A wonderfully disconcerting piece of work which, on a second and even a third reading, only seems to grow more expansive and multifaceted while managing at the same time to remain mysterious and tightly furled … If one of the purposes of fiction is to show us ourselves, Wieringa's mirror is polished to perfection.'

'While the narrative focuses on the collapse of one man's world, it still raises huge moral questions … Haunting.'

'A painful, razor-sharp portrait of what it is to be an ageing man … Beautiful, concise, taut.'

'Brilliant … Merciless in the gentle accuracy with which it asks, very simply and persistently: "What did you think was going to happen?" A Beautiful Young Wife is a book that could derail someone. There's real power in that.'

Cynan Jones, author of The Dig

'Fiction at its most precise and potent.'

'Perfectly dosed prose (translated with elegance by Sam Garrett) and unfaltering narrative control … Wieringa's lithe 128 pages fill half an afternoon, but days later the figure of our Job-like hero, weeping at his lecture podium, is an unforgettable warning that both romantic as well as scientific endeavours require empathy and imagination.'

'With this luminous study of a life in slow crisis, Wieringa seems on fertile new ground. He forgoes the motions of cause and effect to give something as profound and puzzling as life itself.'

'Wieringa is a writer with range and skill … Mesmerising.'

'Wieringa takes us on a journey deep into the psyche of an ageing male in this potent work … No words are wasted in this thought-provoking love story.'

'With his lyrical, sobre dialogue, restrained ambience, formed with well-chosen, evocative words, the author doses drama but the cruelty always pops up with an unexpected blow.'

'A magician at work.'

'A fine-grained look at the soul of a man and his alarming fall from grace.'


'The best contemporary novels are a quest made out of literary and moral ambition. Those who have successfully pursued this Holy Grail in recent times are Bolao with his The Savage Detectives, Sebald in Austerlitz, Coetzee with Disgrace and the late Philip Roth. From now on, to that august list must be added the name of Tommy Wieringa.'