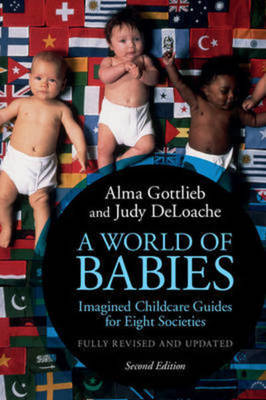 Should babies sleep alone in cribs, or in bed with parents? Is talking to babies useful, or a waste of time? A World of Babies provides different answers to these and countless other childrearing questions, precisely because diverse communities around the world hold drastically different beliefs about parenting. While celebrating that diversity, the book also explores the challenges that poverty, globalization and violence pose for parents. Fully updated for the twenty-first century, this edition features a new introduction and eight new or revised case studies that directly address contemporary parenting challenges, from China and Peru to Israel and the West Bank. Written as imagined advice manuals to parents, the creative format of this book brings alive a rich body of knowledge that highlights many models of baby-rearing - each shaped by deeply held values and widely varying cultural contexts. Parenthood may never again seem a matter of 'common sense'.

Here's what you say about
A world of babies - Judy S DeLoache.

Alma Gottlieb is Professor Emerita of Anthropology and Gender and Women's Studies at the University of Illinois, Urbana-Champaign, and Visiting Scholar in Anthropology at Brown University. She conducted long-term fieldwork in Beng communities in Ivory Coast (1979-93) and now connects with young Beng people through social media. A full-length ethnography of Beng childrearing practices appeared as The Afterlife Is Where We Come From: The Culture of Infancy in West Africa (2004); she has also written the Beng-English Dictionary (with M. Lynne Murphy, 1995) and Under the Kapok Tree: Identity and Difference in Beng Thought (1992). With proceeds from two memoirs of their lives with the Beng - Parallel Worlds (1993) and Braided Worlds (2012) - Gottlieb and fiction writer Philip Graham co-founded the Beng Community Fund, a non-governmental organization that funds development projects in Beng villages.

'Gottlieb and DeLoache's first edition of A World of Babies earned the right to be called a classic of anthropology. Although one might expect the second volume ... to be a simple update of the same studies, Gottlieb and DeLoache have instead done the unexpected - they present an entirely new volume with seven new studies of parenting practices. Taken together, these books set the example of how anthropology, when done well, can open minds to the possibility that there is more than one way to do just about anything, including parenting. I can think of no better way to become a more thoughtful, insightful, and therefore better parent than reading both editions of A World of Babies.' Meredith F. Small, Cornell University, and author of Our Babies, Ourselves

'I cannot effuse enough about the second, fully revised edition of A World of Babies! The first edition has been a mainstay in my classroom for over a decade, and I have frequently given it as a gift to new parents. The creative, innovative, quasi-fictional design of both editions - 'imagined childcare guides' authored by ethnographers studying in a broad range of cultures, writing as if they are imparting knowledge to new parents as a childcare expert, such as a grandmother, midwife, or diviner - makes A World of Babies an enjoyable and impactful read for students and new parents alike. At a time when it may seem like there is no 'right' way to raise a child ... it is refreshing to read a book which concludes that, in fact, there are many 'right' ways to raise children.' Christa Craven, College of Wooster, and author of Pushing for Midwives: Homebirth Mothers and the Reproductive Rights Movement

'This is a fantastic book! I am going to use it right away with both my large undergraduate class and advanced graduate seminar ... It [has] an impressive array of authors, each with deep knowledge of the culture for which they are preparing their 'advice'.' Patricia Greenfield, University of California, Los Angeles, and author of Mind and Media: The Effects of Television, Video Games, and Computers

'A World of Babies provides terrific and vivid personal examples reminding us of the importance of family, culture, history and context in children's lives in today's globalizing world.' Thomas S. Weisner, University of California, Los Angeles, and co-author of Higher Ground: New Hope for the Working Poor and Their Children

'This very accessible yet soundly scholarly book reads like a novel describing the same event from different perspectives, thereby shedding light on the socio-culturally constructed nature of what we might think of as 'objective' and self-evident 'truths' about early child development. A 'must-read' for students and researchers in the area of developmental psychology as well as a great read for anyone interested in the world of babies.' Alexandra M. Freund, University of Zurich, and co-editor of The Handbook of Life-Span Development: Social and Emotional Development

'Starting with a most captivating and comprehensive overview of the worldwide challenges facing twenty-first-century parenting, alongside their seven, fictitious, 'composite person' community authors, who could (if real persons) appropriately dispense 'how to' infant care advice, yet again, Professors Gottlieb and DeLoache manage to spin their baby-care magic for both students and professionals alike ... the seven new (and one updated) chapters provide, as did the first edition, a sparkling set of 'manuals' but with an even greater degree of wit, clarity, and intimate cultural knowledge, spreading cross-cultural insights that at times shock, amuse, and entertain, but always shed further light on the diverse ... ways both biology and culture find expression in how we care for our babies.' James J. McKenna, University of Notre Dame, and author of Sleeping with Your Baby

'[A] clever, refreshing, indeed witty way to engage readers ... not only in the study of children, childhoods and socialization, but also in the conduct of ethnographic field research and the ways in which we present our work.' Myra Bluebond-Langner, University College London, and author of The Private Worlds of Dying Children

'The editors, in the second edition of A World of Babies, have made a great book out of a very good one. The work is unique in combining perspectives not normally found in a single case study ... we learn much about the enormous diversity in cultural practices vis-...-vis babies and about the contemporary forces that provoke change and resistance to change.' David F. Lancy, Utah State University, and author of The Anthropology of Childhood