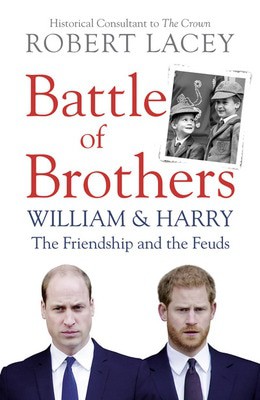 'THE ROYAL BOOK OF THE YEAR
You've read their side of the story, now read the real story' Daily Mail

THIS CRISIS IS AS BIG AS THE ABDICATION - SAYS LACEY, HISTORICAL ADVISOR TO THE CROWN.

The world has watched Prince William and Prince Harry since they were born. Raised by Princess Diana to be the closest of brothers, how have the boy princes grown into very different, now distanced men?

From royal expert and bestselling author Robert Lacey, this book is an unparalleled insider account of tumult and secrecy revealing the untold details of William and Harry's early closeness then estrangement. It asks what happens when two sons are raised for vastly different futures - one burdened with the responsibility of one day becoming king, the other with the knowledge that he will always remain spare.

How have William and Harry each formed their idea of a modern royal's duty and how they should behave? Were the seeds of damage sowed as Prince Charles and Diana's marriage painfully unraveled for all the world to see? In the previous generation, how have Prince Charles and Prince Andrew's lives unfolded in the shadow of the Crown? What choices has Queen Elizabeth II made in marshalling her feuding heirs? What parts have Kate Middleton and Meghan Markle played in helping their husbands to choose their differing paths? And what is the real, unvarnished story behind Harry and Meghan's dramatic departure?

In the most intimate vision yet of life behind closed doors, with the family's highs, lows and hardest decisions all laid out, this is a journey into royal life as never offered before.

ROBERT LACEY is a renowned British historian, the author of numerous international bestsellers, and the historical consultant on the award-winning Netflix series The Crown. He wrote The Crown: The Official Companion, Volumes 1 - 2. For nearly forty years, Lacey has been writing about Queen Elizabeth II and her extraordinary life, making him an expert on her long reign and the royal family. Majesty, his pioneering biography of the Queen, is a landmark study of British monarchy - a subject on which Lacey lectures around the world, appearing regularly on television.

PRAISE FOR BATTLE OF BROTHERS

'They were dubbed the Fab Four, but with a smitten Harry exploding at perceived slights to Meghan, the Princes were torn apart by anger that survives today, as Robert Lacey reveals in the royal book of the year'
Daily Mail

'A poignant account of the princes' unhappy childhood'
The Times

'Robert Lacey is the King of royal biographers'
Kitty Kelley

'A unique insight… Respected for the depth and extend of his research and contacts, Robert Lacey knows arguably more about the Queen than any other commentator writing today'
Daily Mail

'Robert Lacey makes you feel like you're right there, in the palace, in the castle'
Vanity Fair

'Lacey has arranged his material beautifully; not one of these 400 pages is tiresome or dull'
Evening Standard

'[Lacey] has an eye for the telling image … Smart, thorough and well crafted, it is absolutely of its time'
Scotsman

'Has bestseller written all over it'
Observer