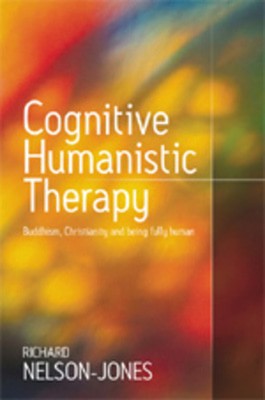 `This excellent book outlines the theoretical base of Cognitive Humanistic Therapy, its links with religious thinking and clear practical guidelines on how to support clients to enhance their life skill. This extremely interesting book is a valuable additions to the therapists toolkit - Plus, Christian Council on Ageing

`An intriguing book, full of surprises and unexpected insights into the human condition and the work of therapists. It offers practical resources for retreat conductors and spiritual accompaniers, with a comprehensive account of current counselling and psychotherapy practice. Working alongside Buddhists in Thailand, Richard Nelson Jones provides suggestions for living more fully, and suggests a variety of therapeutic interventions, based largely on Buddhist concepts, to make this possible - Retreats, Quaker Retreat Group

`A very informative and useful book for religious practitioners and others - Reverend
John Butt, Director, Institute for the Study of Religion and Culture, Payap University, Thailand

`Richard Nelson-Jones is one of the few scholars with the erudition and
breadth of experience necessary to link Christian and Buddhist
traditions in the helping professions. This is much more than old wine in new bottles, and this book will introduce counsellors and therapists to new and better ways of understanding and helping the clients we treat - Danny Wedding, Missouri Institute of Mental Health

Cognitive Humanistic Therapy describes a new approach to psychotherapy and self-development, based on an understanding of what it means to be "fully human". In a unique integration of theory and practice, the book synthesises ideas from the cognitive and humanistic domains of psychotherapy and the religious worlds of Buddhism and Christianity.Written by bestselling author, Richard Nelson-Jones, Cognitive Humanistic Therapy explores the idea of being fully human as a central goal of human existence, one which has traditionally been the province of religion.
In this book, he examines ways in which psychotherapy and personal practice can help individuals develop in both their capacity to reason and their capacity to love. Beginning with the theoretical underpinnings of the Cognitive Humanistic perspective, the book goes on to show how clients can become equipped with the skills to tackle negative reactions and develop positive attributes such as goodwill, gratitude, compassion, equanimity, generosity, helping and service. This book presents a powerful new interpretation of the role of psychotherapy, which will be of interest to psychotherapists, counsellors, their clients, and also to religious people.

Here's what you say about
Cognitive humanistic therapy - Richard Nelson-Jones.

Richard Nelson-Jones was born in London in 1936. Having spent five years in California as a Second World War refugee, he returned in the 1960s to obtain a Masters and Ph.D from Stanford University. In 1970, he was appointed a lecturer in the Department of Education at the University of Aston to establish a Diploma in Counselling in Educational Settings, which started enrolling students in 1971.
During the 1970s, he was helped by having three Fulbright Professors from the United States, each for a year, who both taught students and improved his skills. During this period he broadened out from a predominantly client-centred orientation to becoming much more cognitive-behavioural. He also wrote numerous articles and the first edition of what is now The Theory and Practice of Counselling and Therapy, which was published in 1982. In addition, he chaired the British Psychological Society's Working Party on Counselling and, in1982, became the first chairperson of the BPS Counselling Psychology Section.

In 1984, he took up a position as a counselling and later counselling psychology trainer at the Royal Melbourne Institute of Technology, where he became an Associate Professor. He continued writing research articles, articles on professional issues and books, which were published in London and Sydney. As when he worked at Aston University, he also counselled clients to keep up his skills. In 1997, he retired from RMIT and moved to Chiang Mai in Thailand. There, as well as doing some counselling and teaching, he has continued as an author of counselling and counselling psychology textbooks. A British and Australian citizen, he now divides his time between Chiang Mai and London and regularly visits Australia.

`This excellent book outlines the theoretical base of Cognitive Humanistic Therapy, its links with religious thinking and clear practical guidelines on how to support clients to enhance their life skill. This extremely interesting book is a valuable additions to the therapists toolkit' - Plus, Christian Council on Ageing