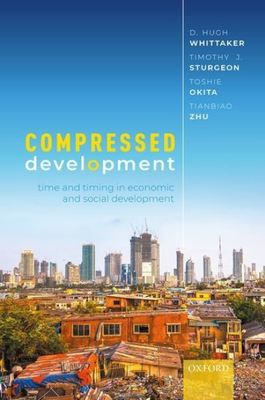 This book proposes a new way to approach comparative international development by focusing on time and timing in economic and social development. The UK industrialized over two centuries, and then started to de-industrialize in the late 1960s. Today, the most rapid developers experience aspects of industrialization and de-industrialization simultaneously. It is no longer clear that industrialization offers the path of growth it once did; industrialization has become'thin.' Demographic and social challenges that earlier developers faced sequentially now come at the same time. Rapid growers experience compression most acutely, but the spatial and temporal fusing of past and present is widespread, affecting high-, middle-, and lower-income countries alike.Timing refers to the differences in historical periods in which development takes place. The geopolitical, institutional and technological environment for countries recently integrated into the global economy has been vastly different from that of the preceding postwar decades of 'embedded liberalism,' although it does contain echoes of the 'first globalization' and 'first financialization' a century ago. The first era of liberalism did not end well, and the second is similarly foundering onthe rocks of nationalism and protectionism, as it is being battered by a global pandemic.The authors propose an interdisciplinary conceptual framework based on co-evolving state-market and organization-technology dyads, which will help readers make sense of contemporary development across multiple societies, sectors and geographies, and provide a template for historical comparison.

Here's what you say about
Compressed development - D. H. Whittaker.

D. Hugh Whittaker is Professor in the Economy and Business of Japan, and Fellow of St Antony's College, University of Oxford. His research encompasses Japanese and comparative employment, innovation and technology management, small firms and entrepreneurship, and development.

Timothy Sturgeon is Senior Researcher at the Industrial Performance Center, MIT. His research explores how evolving technologies and business models are altering linkages between industrialized and developing economies, with an emphasis on offshoring and outsourcing practices in the electronics, automotive, and services industries.

Toshie Okita is Research and Teaching Associate at the Nissan Institute of Japanese Studies, University of Oxford. Her research focuses on international and comparative education, sociology of the family, socio-linguistics, youth transition, and social policy.

Tianbiao Zhu is Professor, Deputy Chair for the Department of Sociology, and Executive Director for the Institute for Advanced Study in Humanities and Social Sciences at Zhejiang University. His research interests include international and comparative politics, international and comparative political economy, and the political economy of development.

Compressed Development assesses the dynamic interactions between industrial policy, financialization, organisation, technological innovation, employment and automation. It illuminates the tensions between economic, social and environmental challenges, including climate change, inequality and vulnerability. It provides an analytical and empirical tour de force, which is essential reading for all scholars and policy actors focused on contemporary industrial
and technological innovation, global value chains and digital platforms. It comes at a pivotal time for assessing seismic geo-political shifts, reflected in US-China trade and technological conflicts, as well as nationalist campaigns for de-globalisation. It provides an essential exploration of the diverse
economic and social counter forces that will influence post-Covid outcomes.

Compressed development used to be seen as a special feature of some exceptionally successful countries in late economic development. This book, while not repudiating such views altogether, convincingly leads us to realize that compressed development has long been a generic mode of transformation embedded in the global ecology of industrial, technological, financial, and demographic relations. Even China's recent 'developmental miracle', among other national cases, is
forcefully reinterpreted in respect to the opportunities, resources, and pressures from the specific world-era in which developmental compression is as much a requirement as an achievement.

Bold in its theoretical ambitions and panoramic in its empirical scope,Compressed Development breaks new ground in its projections of the global dynamics of development. Moving firmly beyond encumbering old schemas, the authors project a vision of the current global matrix of technological and organizational change, mediated by states and markets, in which the evolution of sectors and strategies is compressed, and China becomes the most telling national
case. Any scholar hoping to keep pace with the dizzying world of the 21st century global political economy needs to start by confronting the complexities set out in this book.

The tide of globalization, which appeared to be an irresistible force at the turn of the 21st century, splintered into a confusing welter of economic, political and social scenarios in the 2010s.Compressed Development offers a framework that helps explain why the dividing line between early and late developing economies has become blurred, and why the rivalry between the United States and China is likely to define the main features of the global economy in
the coming decades. While Compressed Development provides no simple answers about the future of development, it gives countries, companies, civil society organizations and ordinary citizens essential tools needed to navigate the choices and challenges ahead of us. A highly recommended book for decision-makers,
scholars and students.

The authors coin a new term - 'compressed development' - to shed light on what's new and what's different in the development experience after the 1990s: economic change is taking place both at a much faster rate and in an international context that allows states far less control. They explain why todays' developing countries are facing challenges that are fundamentally different from any in the past. This is a fascinating synthesis of the technological,
institutional, and ideological transformations of our era.