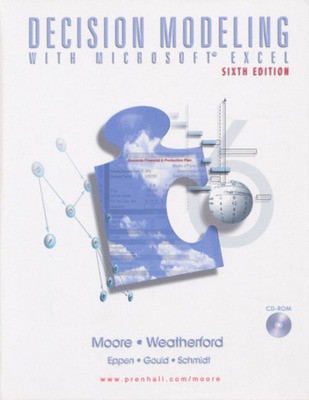 For undergraduate/MBA-level courses in Management Science and Decision Modeling.

This text introduces students to the key ideas of modeling and management decision making that will be important to them throughout their careers. Addressing the needs of students interested in both business administration and decision science careers, it provides a conceptual foundation for all topics and the role of spreadsheet modeling techniques in the larger context of business decision-making. It features a wealth of realistic, relevant examples updated to reflect the latest Excel 2000 version, and actively engages students in model building and analysis. An accompanying CD-ROM contains extensive software application packages students will use long after the course is completed.

Here's what you say about
Decision modeling with Microsoft Excel - Jeffrey H Moore.

JEFFREY MOORE joined the faculty at Stanford's Graduate School of Business in 1972 after more than 10 years work as a Communications Engineer, Computer Systems Analyst, and Management Analyst. Since joining Stanford, he has designed and taught courses in the Operations and Information Technology area at the Executive, MBA and PHD levels. He teaches the core course in modeling and analysis and is a popular lecturer in six of Stanford's Senior Executive programs. In his research, he concentrates on decision support systems and computer use by senior executives. He has written more than 40 papers in these and other areas, and has done extensive consulting for private industry both nationally and internationally in the application of information technology and modeling for decision support. He has worked on several courseware projects to introduce Excel for modeling and decision support to graduate level MBA's and executives. This has included work under several grants from Microsoft, IBM, and Hewlett Packard, and early work with Frontline Systems in the testing and development of Excel's Solver, particularly the linear optimization options. In the late 1970s he pioneered one of the first courses to use spreadsheet modeling in a business school, and soon thereafter, orchestrated Stanford's conversion of its modeling core course to spreadsheets, the first major business school to do so. Since that time, he has been involved in the development of modeling and statistical applications of spreadsheets, and has developed GLP, Stanford's Graphical LP Optimizer, and Regress, an Excel-based regression add-in now used at Stanford, Duke, UCLA, and elsewhere. Earlier he served on the INFORMS Business School Educational Task Force which surveyed more than 300 university instructors in the teaching of management science and has made presentations at its conference on the important role spreadsheets should play in management education. He is also the Director of SunTELL, the Stanford Business School's Technology Educational Learning Laboratory, a facility funded by SUN Microsystems devoted to understanding the use of technology in management and in management education.

In 1996 and again in 1998, he received Stanford's Sloan Teaching Excellence Award for his core course in Decision Support Modeling. Dr. Moore holds a BSEE with specialty in digital circuit design from the University of Cincinnati, a joint MBA/CS degree from Texas A&M University, and a PhD in Business from the University of California at Berkeley. He also holds a Professional Engineer certification (E.E., Ohio).

LARRY R. WEATHERFORD is an Associate Professor in the College of Business at the University of Wyoming. He received his BA from Brigham Young University in 1982, and his MBA and PhD from the Darden Graduate School of Business at the University of Virginia in 1991. He received the Outstanding Teaching Award for the College of Business in his first year as a professor. In the ensuing years he has also earned the "Outstanding Faculty Member" award by Alpha Kappa Psi, the Outstanding Junior Research Award for the College of Business, and more recently the University-wide Ellbogen Meritorious Classroom Teaching Award. He has published 17 scholarly articles in such journals as Operations Research, Decision Sciences, Transportation Science, Naval Research Logistics, Cornell Hotel and Restaurant Administration Quarterly, International Journal of Technology Management, Journal of Combinatorial Optimization and Omega.

On the practitioner side, he has made over 48 presentations on five different continents to professional organizations. He has consulted with such major corporations as American Airlines, Northwest Airlines, Lufthansa, German Airlines, Swissair, Scandinavian Airlines, Air New Zealand, South African Airways, Unisys Corporation, Walt Disney World and Hilton Hotels, as well as many other smaller corporations.

On the personal side, Larry is married to the lovely Jenny and they 7 children (yes, they are all from the same union)! Most of his outside interests are centered in his family and church. Any other spare time is spent playing racquetball or golf or reading a fun book.