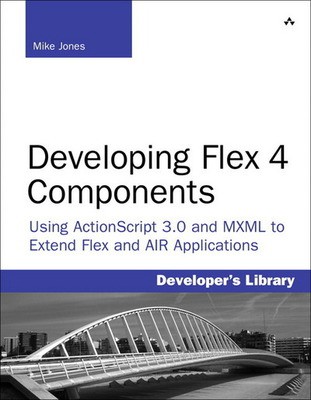 development with the Adobe Flex 3 platform

How to build components for Flex and AIR applications using ActionScript 3.0 and

structured the Flex framework around components, and allowed developers to

extend Flex's capabilities with their own components. However, few Flex

developers know how to create these custom components. Developing Flex

Components is the first book to completely demystify that process.

Jones explains the anatomy of a Flex component, including both visual and

non-visual components, and introduces the components that come with the

Flex framework. Next, one step at a time, he walks through building new Flex

components that leverage the platform's powerful capabilities and can be

incorporated into both Flex and AIR applications. Jones covers topics that are

rarely addressed in Flex books, including component metadata, events and

and maintaining component documentation, as well as an appendix of

Mike Jones has 14 years of experience developing for the Flash Platform. He was first introduced to Flash (then called Futurewave Splash) in November 1996, by his then Visual Arts studio manager while at a university. Suffice it to say, Flash made sense to Mike, and he literally ran with it and never looked back.

These days, Mike is a Platform Evangelist at Adobe and spends most of his time speaking with customers, presenting, and blogging and tweeting about the Flash Platform. Although developing is Mike's first love, he never refuses the chance to speak at user groups and conferences about components, the Flex framework, AIR, and the Flash Platform in general.

A regular speaker at Flash on the Beach on topics such as "Flex Development in 60 Minutes" and Flex component development, anyone who has met Mike knows he speaks passionately about these technologies, which is the same passion that has kept him engaged as Flash and Flex have grown over the years. When he isn't speaking or developing, Mike posts his thoughts and musings on Flash technologies on his blog (http://blog.flashgen.com). He lives in Haslemere, England, with his wife Emma, new baby daughter Freya, and his cat JPeg.