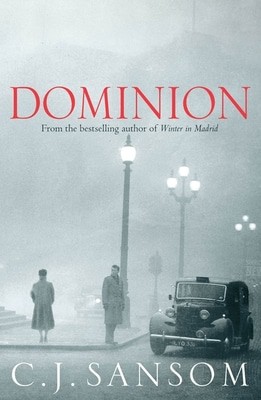 1952. Twelve years have passed since Churchill lost to the appeasers and Britain surrendered to Nazi Germany after Dunkirk. As the long German war against Russia rages on in the east, the British people find themselves under dark authoritarian rule: the press, radio and television are controlled; the streets patrolled by violent auxiliary police and British Jews face ever greater constraints. There are terrible rumours too about what is happening in the basement of the German Embassy at Senate House. Defiance, though, is growing. In Britain, Winston Churchill's Resistance organization is increasingly a thorn in the government's side. And in a Birmingham mental hospital an incarcerated scientist, Frank Muncaster, may hold a secret that could change the balance of the world struggle for ever.

Civil Servant David Fitzgerald, secretly acting as a spy for the Resistance, is given the mission by them to rescue his old friend Frank and get him out of the country. Before long he, together with a disparate group of Resistance activists, will find themselves fugitives in the midst of London's Great Smog; as David's wife Sarah finds herself drawn into a world more terrifying than she ever could have imagined. And hard on their heels is Gestapo Sturmbannfuhrer Gunther Hoth, brilliant, implacable hunter of men . . .

At once a vivid, haunting reimagining of 1950s Britain, a gripping, humane spy thriller and a poignant love story, with DOMINION C. J. Sansom once again asserts himself as the master of the historical novel.

Here's what you say about
Dominion - C. J Sansom.

C. J. Sansom was educated at Birmingham University, where he took a BA and then a Ph.D. in history. After working in a variety of jobs, he retrained as a solicitor and practised in Sussex, until becoming a full-time writer. Sansom is the bestselling author of the acclaimed Shardlake series, the Spanish Civil War thriller Winter in Madrid and the number one bestseller Dominion. He lives in Sussex.

'C. J. Sansom takes a break from his Shardlake series to offer Dominion, an absorbing, thoughtful, spy-politico thriller set in the fog-ridden London of 1952. Not, however, the year as it is usually remembered. Sansom has attempted a difficult format - the "what if?" novel. What if, in 1940, Lord Halifax became prime minister instead of Churchill? Britain would have made peace with Hitler, Sansom answers, and by 1952 become a totalitarian state, with Germany, acting as puppet-master rather than invader, setting the scene. Churchill, in hiding, is leader of a resistance movement, to which the hero of Dominion, David Fitzgerald, a civil servant hiding his Jewishness, belongs. Part adventure, part espionage, all encompassed by terrific atmosphere and a well-argued "it might have been"' Marcel Berlins, The Times

'An intriguing thriller set in an alternative Britain under the Nazis cunningly reanimates the post-war years as they might have been . . . What if the second world war had ended not in 1945, but in 1940? In this haunting, vividly imagined novel by C. J. Sansom, the hinge on which history turns is the resignation of Neville Chamberlain in May 1940. . . As in the Shardlake novels, set in Tudor England, for which he is best known, Sansom is an admirably expansive and unhurried storyteller. His characters are all given personal histories and richly detailed pasts that serve to provide them with a depth more usually associated with literary fiction than the thriller. Their conversations do more than just drive forward the plot: they help to give substance and reality to the world they inhabit. The alternative Britain that Sansom constructs, a brilliant amalgam of the 1950s as they actually were and as they might have been, is entirely convincing. Throwaway details cleverly add verisimilitude to his portrait. The tale he sets within his parallel universe is at once exciting, sophisticated and moving. There will be few better historical novels published this year' Sunday Times

'This is a big novel with traces of a thriller, in which the good are good and the bad are very bad indeed . . . For readers who enjoy a grown-up adventure story Dominion is evocative, alarming and richly satisfying' Daily Express

'Masterly . . . sketched with hallucinatory clarity . . . Sansom, whose Tudor mysteries showed his feeling for the plight of good people in a brutal, treacherous society, builds his nightmare Britain from the sooty bricks of truth . . . From the thuggish "Auxies" who beat up protestors to the apolitical rebellion of the "Jive Boys", every note in Sansom's smoggy hell rings true . . .No bulldog defiance in 1940; no weary triumph in 1945; no dogged renewal with the post-war Welfare State: Dominion shows us what a truly broken Britain would look, and feel, like' Boyd Tonkin, Independent

'A thriller which is also, and perhaps primarily, a work of alternative or counter-factual history, set in 1952 . . . in the manner of Robert Harris's Fatherland. There are fine things a-plenty here, and the plot unfolds compellingly and gallops along briskly. C. J. Sansom has brought off a nice double, writing a good thriller which invites you to ponder the different course history might have taken' Allan Massie, Scotsman

'C. J. Sansom is fascinated by the abuse of power, so it's not surprising that, hot on the heels of his splendid Shardlake series, comes a novel set in a post-war Britain dominated by Nazi ideology . . . There have been a number of other novels imagining this kind of alternate history - Robert Harris's Fatherland, Owen Sheers' Resistance, Len Deighton's SS-GB and, for children, Sally Gardner's Maggot Moon. All are outstanding in different ways but Sansom's Dominion is the most thoroughly imagined in all its ramifications. Like Harris, Sansom has woven a thriller with the tale of a man's growth into moral courage, but he has done it with the compassion and richness that many literary writers should emulate. Every detail of this nightmare Britain rings true . . . As in Sansom's Winter in Madrid, the clash between compassion and political conviction is dramatised. David's looks and talent make him as freakish in his way as frail, disabled Frank, and the friendship between someone who can survive institutions and someone who cannot is one of the most affecting aspects of the novel . . . Naturally, the weather is awful, and obliges with a choking, oily fog as our heroes battle against hideous odds to get to safety. But both as a historical novel and a thriller, Dominion is absorbing, mordant and written with a passionate persuasiveness . . . Bravo!' Independent on Sunday