Don't you know there's a war on? - Janet Todd 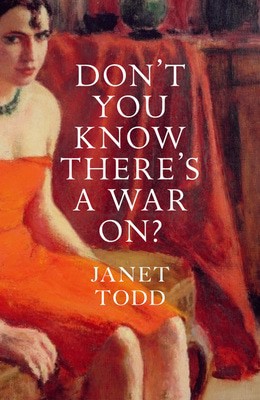 The Second World War is over. England is losing its empire, world status and old elite values. The Empire strikes back with mass immigration, while the government soothes its people with welfare, the NHS, televisions and refrigerators.
At the centre of the novel is the contemptuous Joan Kite, at odds with all the changes imposed on the country in the post war period.
Shut up in a house with her only daughter, she refuses to compromise and adapt, pouring vitriol on anyone who seeks to enter their lives. After years of frugality, patriotism, service and excitement, she is angry at the contracted existence she's been delivered and at the manner in which her aspirations to upper-middle-class culture have been thwarted. When her daughter is threatened, she begins a diary to investigate her past before and during the war. In it she gives rein to a flamboyant imaginary life and to an energetic loathing for the reality of a diminished England. During the freak hot summer of 1976, as water is rationed and ladybirds invade their home, the intimacy of mother and daughter intensifies. Their lives unravel within the claustrophobia of their semi-detached house behind closed velvet curtains.

Here's what you say about
Don't you know there's a war on? - Janet Todd.

Janet Todd (Jane Austen's Sanditon, Radiation Diaries, Aphra Behn: A Secret Life, A Man of Genius, Lady Susan Plays the Game) internationally renowned scholar is the General Editor of The Cambridge Works of Jane Austen, editor of Jane Austen in Context, and author of The Cambridge Introduction to Jane Austen, and a former president of Lucy Cavendish College, Cambridge. Now a novelist, biographer, and literary critic, she is an Emerita Professor at the University of Aberdeen and an Honorary Fellow of Newnham College, Cambridge. Born in Wales, she grew up in Britain, Bermuda and Ceylon/Sri Lanka and has worked at universities in Ghana, Puerto Rico, India, the US (Douglass College, Rutgers, Florida) Scotland (Glasgow, Aberdeen) and England (Cambridge, UEA). She lives in Cambridge, England and Venice, Italy.

Praise for Janet Todd's recent work
Radiation Diaries
"Janet Todd's pain-filled interweaving of life and literature is a good book written against the odds - it is frank, wry and unexpectedly heartening" -Hilary Mantel

"A stunningly good, tight, intelligent truthful book and one of the most touching love letters to literature I have ever read. Ah, so that's why we write, I thought" -Maggie Gee

"I read it avidly, unable to stop. I love the voice, especially the tension between restraint and candour in its brevities - and yet endearingly warm and honest. It's an original voice and utterly convincing in its blend of confession, quirkiness, humour, intimacy. It's nothing short of a literary masterpiece, inventing a genre. A delight too is the embeddedness of books in the character of a lifelong reader; it is fascinating to learn of Todd's fascinating variegated past. How gallant (like the verbal gallop against mortality at the close of The Waves)" -Lyndall Gordon

A Man of Genius

"A haunting, a gothic novel with a modern consciousness" -Philippa Gregory

"A quirky, darkly mischievous novel about love, obsession and the burden of charisma, played out against the backdrop of Venice's watery, decadent glory" -Sarah Dunant

"A mesmerizing story of love and obsession: dark and utterly compelling."
-Natasha Solomons

"A real knack for language with some jaw-droppingly luscious dialogue. I can see the author's pedigree in the story, style, and substance of the book. It seems like a wonderful sleeper: think Elegance of the Hedgehog."
Geoffrey Jennings, Rainy Day Books

"A haunting, sophisticated story about a woman slowly discovering the truth about herself and the elusive, possibly illusive, nature of genius." -Sunday Times

"Todd is one of the foremost feminist literary historians writing in this country. She has devoted her literary career to recovering the lives and works of women writers overlooked and disparaged by generations of male literary scholars." -Independent on Sunday

"A brisk, entertaining, and richly detailed portrait of a unique woman and her era."
-Kirkus

Death and the Maidens: Fanny Wollstonecraft and the Shelley Circle; Mary Wollstonecraft
"Todd is an extraordinary researcher and sophisticated critic. This biography conjures a vivid sense of a revolutionary and as a woman, and offers precise insights into the progress of one writer 's life." -Ruminator

"A juicy portrait, reconstructed with insight and wit" -Entertainment Weekly

"The great strength of Janet Todd's biography lies in her willingness to unpick the feminist frame on which earlier lives of Wollstonecraft were stretched to fit." -Kathryn Hughes, Literary Review

"Janet Todd brilliantly captures the absurdity in Wollstonecraft while defending the view that her life was both important and revolutionary. Like Virginia Woolf, Todd interprets this life as a daring experiment. Wollstonecraft is all but resurrected in Janet Todd's distinguished book: brave, reckless and wide open to life. Virginia Woolf claimed for Wollstonecraft a special kind of immortality. Janet Todd has strengthened the case." -Ruth Scurr, The Times