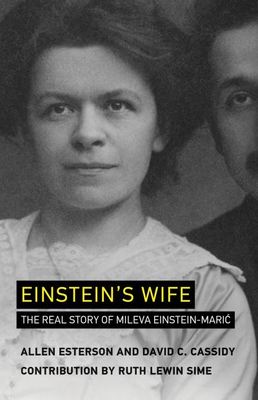 Albert Einstein's first wife, Mileva Einstein-Maric, was forgotten for decades. When a trove of correspondence between them beginning in their student days was discovered in 1986, her story began to be told. Some of the tellers of the "Mileva Story" made startling claims: that she was a brilliant mathematician who surpassed her husband, and that she made uncredited contributions to his most celebrated papers in 1905, including his paper on special relativity. This book, based on extensive historical research, uncovers the real "Mileva Story."

Mileva was one of the few women of her era to pursue higher education in science; she and Einstein were students together at the Zurich Polytechnic. Mileva's ambitions for a science career, however, suffered a series of setbacks-failed diploma examinations, a disagreement with her doctoral dissertation adviser, an out-of-wedlock pregnancy by Einstein. She and Einstein married in 1903 and had two sons, but the marriage failed. Was Mileva her husband's uncredited coauthor, unpaid assistant, or his essential helpmeet? It's tempting to believe that she was her husband's secret collaborator, but the authors of Einstein's Wife look at the actual evidence, and a chapter by Ruth Lewin Sime offers important historical context. The story they tell is that of a brave and determined young woman who struggled against a variety of obstacles at a time when science was not very welcoming to women.

Here's what you say about
Einstein's wife - Allen Esterson.

Allen Esterson was a Lecturer in Mathematics and Physics at Southwark College in London before his retirement.

What is made abundantly clear, however, is what it was like to live in the shadow of Albert Einstein. Careful and thorough research that includes everything from the couple's old school records to letters written between the two reveal what Maric actually did do and places her within the context of women's struggle to enter the world of science at the turn of the twentieth century. The book does reveal that success is not based in gender but in opportunity, encouragement, and education, and that denying such things to women is a sorry waste of gifts much needed by a troubled world.

Ultimately, the authors conclude, buying into myths about Mileva Einstein-Maric does her a further injustice by denying her a unique place in scientific history…Hers is 'the very human, real story of a fallible, yet brave and determined young woman who, for various reasons, was not able to fulfill her dreams for the career and marriage she had hoped for.' Given the barriers women in science still face, her story remains relevant.

Throughout history Albert Einstein's first wife, Mileva Maric, was practically written out of the great physicist's story. Later she was credited as a secret collaborator on his most famous theories. Scholar Esterson and science historian Cassidy aim to set the record straight in this compelling biography. They pore over school transcripts, letters and contemporary accounts to assemble a cohesive picture of Maric's life. She overcame bias against women in science to pursue a Ph.D. in physics-but ultimately gave up her career when she married Einstein. As his confidant and study partner during his university days, Maric undoubtedly did contribute to Einstein's development as a scientist. But the authors find no evidence that she was a co-inventor of relativity, as some have claimed. 'Tragically,' they write, 'she did not achieve her full potential as a scientist... nor did she realize her hopes and dreams in marriage and in life.'"

Somewhere under the noise and dust is the real person whom Cassidy's evidence shows: an intelligent woman who worked hard to get an intellectually demanding education and suffered deep personal blows on top of the deeper bruise of being the wrong gender at the turn of the wrong century. Our century needs to attend to her. The deck is still stacked against female scientists. A Mileva Maric coming of age in the twenty-first century would still face lack of credit - and it would be only one in a long list of barriers and biases.

What emerges instead is a portrait of a capable but frustrated young woman who tragically did not achieve her full potential as a scientist...This biography of Einstein's forgotten first wife instead offers a haunting indictment of Albert as a distant and ultimately disloyal companion: a quantum husband who was neither here nor there; a visionary who saw the starlight in the universe but not the darkness closer to home.

Evidence-based biographies such as Einstein's Wife are essential.

Einstein's Wife reconstructs Mariic's early life fairly and accurately. The compact volume will be an informative addition to library collections and a fascinating account for curious readers.

Einstein's Wife provides at last an authoritative account of Mileva Einstein-Maric's real standing in history. It is also a case study of a painstaking pursuit of the facts against the background of a long history of mythologizing. And finally, it answers the nagging question of why such extensive and painstaking historical research is truly needed.

Einstein's Wife provides an extremely valuable contextualization of Maric's undoubted achievement in blazing a trail for women in science.