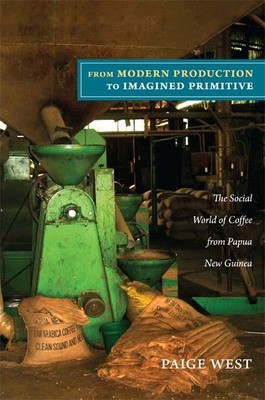 In this vivid ethnography, Paige West tracks coffee as it moves from producers in Papua New Guinea to consumers around the world. She illuminates the social lives of the people who produce coffee, and those who process, distribute, market, and consume it. The Gimi peoples, who grow coffee in Papua New Guinea's highlands, are eager to expand their business and social relationships with the buyers who come to their highland villages, as well as with the people working in Goroka, where much of Papua New Guinea's coffee is processed; at the port of Lae, where it is exported; and in Hamburg, Sydney, and London, where it is distributed and consumed. This rich social world is disrupted by neoliberal development strategies, which impose prescriptive regimes of governmentality that are often at odds with Melanesian ways of being in, and relating to, the world. The Gimi are misrepresented in the specialty coffee market, which relies on images of primitivity and poverty to sell coffee. By implying that the "backwardness" of Papua New Guineans impedes economic development, these images obscure the structural relations and global political economy that actually cause poverty in Papua New Guinea.

Here's what you say about
From modern production to imagined primitive - Paige West.

Paige West is Associate Professor of Anthropology at Barnard College, Columbia University. She is the author of Conservation Is Our Government Now: The Politics of Ecology in Papua New Guinea, also published by Duke University Press, and a co-founder and co-editor of the journal Environment and Society.

"Coffee is a global and of course a ubiquitous commodity. And here lies its analytical challenge: how to grasp the full complexity of a drug whose path from production to consumption entails a world of enormous semiotic, cultural, institutional, political, economic, and ecological complexity. Paige West takes us deep into the heart of coffee's image world, as a spectacle, as a brand, and as a carrier of forms of certified value. But she also pursues the bean into the highlands of Papua New Guinea, where the crop, paradoxically, has little cultural value, and through the global supply chains of corporate shippers and processors. Here is an ethnography which exposes our morning cappuccino to the bright light of modernity. From Modern Production to Imagined Primitive does for coffee what Sidney Mintz in Sweetness and Power did for sugar: here in short is a meditation on caffeine and power."-Michael Watts, Chancellor's Professor, University of California, Berkeley

"Paige West writes against two kinds of flatness: the flatness of commodity chain studies and the flatness of ethical consumption's marketing spin. She offers, instead, a richly peopled ethnographic account of coffee's trajectory through time, space, lives, and imaginations, and takes us deep into the contradictory heart of our neoliberal times. Penetrating, provocative, and moving, this is an excellent read."-Tania Murray Li, University of Toronto

"This well-written ethnography contributes to several bodies of literature including those on coffee production and commodity chain studies, and ethnographic accounts from Papua New Guinea. It would be useful for graduate or undergraduate courses on globalization, as an example in graduate courses on writing ethnography, and for those scholars studying commodity chains and third-party certification systems."
American Ethnologist - Rebecca Mari Meuninck

"Although many anthropologists have traced paths traveled by speci?c commodities around the world, no study can match the ambition and sweep of Paige West's book.
American Anthropologist - Daniel Reichman

"A very powerful account of contemporary Papua New Guinea and global capitalism. It critically examines the fantasy images so known to us through popular media and advertising of commodities and shows how very real consequences these fantasies have. Written in an extremely clear and vivid style, the book makes excellent reading for courses on environmental anthropology, neoliberalism and Papua New Guinea. It critically examines the seemingly well meaning certification schemes, which raise questions among both academics and consumers alike, and this should allow for a wide-based readership. Finally, it simply is a very solid and well written ethnography based on long periods of fieldwork, which gives a thorough account of global coffee markets."
Oceania - Tuomas Tammisto

"Readers must be grateful for this 'rich' look at the Gimi people and for West's challenge to analyze the images attached to them and to coffee."
Social Analysis - Robert W. Thurston

"This fine study could be useful in anthropology courses, area studies of Pacific culture, and courses on food studies, as well as a satisfying accompaniment to many hot cups of coffee."
Contemporary Pacific - Larry Lake

"West provides an excellent ethnography that covers a wide variety of issues regarding coffee production in Papua New Guinea. Her analyses are complex and her research detailed. This work is of great value to increasing our understanding of Papua New Guinea as well as the creation of the imagined primitive in order to sell coffee."
Electronic Green Journal - Amy E. Harth