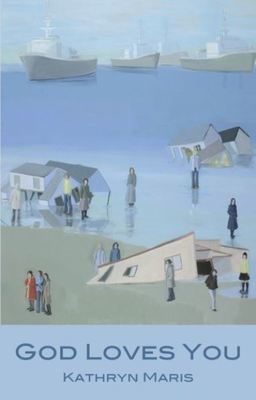 Kathryn Maris's new poetry collection, God Loves You, is both elegant and sharp. Inspired by the formal grandeur of the King James Bible, these poems resonate and also gently subvert religious maxims.

Here's what you say about
God loves you - Kathryn Maris.

'Maris's poems strike me as an unlikely marriage between Wallace Stevens and Sylvia Plath - the aesthete playing on the edges of her own nerves, examining the myth of herself, skirting and side-stepping the blunt charges of language and loss the way an intellectual matador might sidestep a bull. It is a pretty enthralling performance. Maris carries the small bright sword of wit rather conspicuously so the bull might know she is not defenceless and the glitter of the wit arrests us too… This has a Dorothy Parker air, metropolitan and crowded, intimate with other lives whose own limits may never be known.' - George Szirtes in Poetry London

"My mind is open, / so the devil can get in" says the speaker of "Knowledge is a Good Thing," and there's a delicious sense of both open-mindedness and devilry in Maris's work. Her company is quirky, stimulating and sparklingly intelligent. You could say she's like Sylvia Plath with added chutzpah. But, really, Kathryn Maris is like no-one but herself. - Carol Rumens
Publisher: Seren

Crow realised God loved him -
Otherwise he would have dropped dead
So that was proved.

Maris's collection departs neatly from this juncture, opening on 'What will Happen to the Neighbours when the Earth Floods' - a witty, chatty rejoinder to Hughes's esoteric quest. Maris references Crow and picks up some of Hughes's major themes, and some of the poems here ('Why?' and 'Knowledge is a Good Thing' for example) are incredibly reminiscent of Crow's (jet) black humour, breezy structure and weighty subject matter. God Loves You supplants Crow with a twenty-first-century female narrator who struggles to level up to God and who attempts, with bags of humour, to understand the ridiculous nature of life. The poet's approach is to meticulously examine incidents and moments of her life for emotional content, meaning and spiritual value. This probably sounds terribly earnest but the results are terribly funny, and touching. 'The Sun's Lecture Notes on Itself' is an exercise in Monty Python-esque surrealism:

What you believed was great may have been nothing, and it was not
new. Nothing is new, but you knew that.

The answer most often is 'Yes'. But the 'yes' is mediated. As in 'Yes, but
not in the way you think.'

Maris's playfulness leads to her questioning the dogmatic absurdity of religious narrative in 'Variations on Melissanthi's Atonement'. The poem deconstructs the dense, maddening language of scripture with comical consequences. This is the key to the collection's likeability. Maris's warmth is immensely engaging. Partially, this is due to her talent for melding quasi-religious lofty verse with intentionally overly-familiar terms. In 'Angel with a Book', our protagonist, the angel, has a 'dodgy chest', and in 'Legacy':

The Lord said
Let there be
Imperfection
And there was.
Let the left
Testicle
Hang lower
Than the right.

I also love Maris's desperately earth-bound poems. 'This Is a Confessional Poem' gave me a hot niggle of recognition which may or may not make me evil. This depends on how serious Maris was when she wrote it (many of these poems are, it's safe to say, tongue-in-cheek). I also loved 'Darling, Would you Please Pick up those Books', which sketches a situation that will be familiar to anybody who has ever dated an artist or writer of any kind. What do you do with the creative overhang from your partner's previous relationships - the poems and paintings inspired by their ex-lovers? Do you celebrate them? Hiss at them? Maris's narrator's polite rising rage is pitch perfect and sympathetic.

Overall, it is hard to describe this collection without using the word 'neurosis', but don't be put off. Embrace it. This is neurosis refracted through a prism - the segments of the narrator's paranoid discomfort separated and interrogated expertly, and often humorously. This book contains some pretty nifty quotations too - everything from council-estate graffiti to Rilke! A rich volume of work.
Jemma L. King @ www.gwales.com