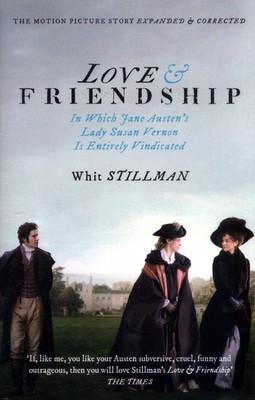 'If, like me, you like your Austen subversive, cruel, funny and outrageous, then you will love Stillman's Love & Friendship' The Times
'Lady Susan is finally getting some long overdue respect' New York Times
'Lady Susan remains deliciously wicked' Vogue

With a pitch-perfect Austenian sensibility and wry social commentary, filmmaker and writer Whit Stillman cleverly re-imagines and completes one of our greatest writers' unfinished works. Love & Friendship is a sharp comedy of manners, and a fiendishly funny treat for Austen and Stillman fans alike.

Impossibly beautiful, disarmingly witty, and completely self-absorbed: meet Lady Susan Vernon, both the heart and the thorn of Love & Friendship. Recently widowed with a daughter who's coming of age as quickly as their funds are dwindling, Lady Susan makes it her mission to find them wealthy husbands - and fast. But when her attempts to secure their futures result only in the wrath of a prominent conquest's wife and the title of 'most accomplished coquette in England', Lady Susan must rethink her strategy.
Unannounced, she arrives at her brother-in-law's country estate. Here she intends to take refuge - in no less than luxury, of course - from the colorful rumors trailing her, while finding another avenue to 'I do'. Before the scandalizing gossip can run its course, though, romantic triangles ensue.

A SPECIAL EDITION FEATURING JANE AUSTEN'S ORIGINAL NOVELLA AS ANNOTATED BY THE NARRATOR.

PRAISE FOR LOVE & FRIENDSHIP THE FILM
'A RACY DELIGHT' Guardian *****
'FIND ME A FUNNIER SCREEN STAB AT AUSTEN, AND I'M TEMPTED TO OFFER YOUR MONEY BACK PERSONALLY' Telegraph *****
'TREMENDOUSLY WITTY' Independent *****
'MAY JUST BE THE BEST JANE AUSTEN FILM EVER MADE' London Evening Standard *****

Here's what you say about
Love & friendship - Whit Stillman.

Whit Stillman - winner of France's Prix Fitzgerald for his prior novel - is the writer-director of five films, including Metropolitan, Barcelona, The Last Days of Disco, Damsels in Distress, and Love & Friendship, a mendacious representation of this story.
At university, he was an editor of the Harvard Crimson and later worked in book publishing and journalism. His first novel, The Last Days of Disco, With Cocktails at Petrossian Afterwards, also derived from a film story.

Thank heaven for Whit Stillman and his reworking of Austen's novella, Lady Susan... Stillman seamlessly interweaves the original text and his own words. There were moments when I was unsure which bits were Austen's and which were Stillman's... If, like me, you like your Austen subversive, cruel, funny and outrageous, then you will love Stillman's Love & Friendship.
The Times

Stillman has immense fun playing the earnest, gullible narrator's misconceptions against the machinations of an arch-manipulator in this witty, sly spoof
Mail on Sunday

Lady Susan is finally getting some long overdue respect... The book and film both showcase some of the sharpest lines from Austen's overlooked work.
New York Times

Stillman worships Austen and [the book and film] show a deep familiarity with her life, work, and times
Slate

For those who have read Austen's original novella, you will remember that Lady Susan Vernon is described by Reginald De Courcy as "the most accomplished coquette in England." and by others as devious, wicked and "with a happy command of language, which is too often used, I believe, to make black appear white." To vindicate her scurrilous behavior is an intriguing premise indeed!
Austen Prose - A Jane Austen Blog

PRAISE FOR LOVE & FRIENDSHIP - THE FILM
A racy delight... What audacity, what elegance! Here is a hilariously self-aware period comedy polished to a brilliant sheen

Shows just how funny Jane Austen can be... It's flat-out hilarious - find me a funnier screen stab at Austen, and I'm tempted to offer your money back personally
Telegraph *****

Kate Beckinsale is wonderfully immoral in this pitch-perfect adaptation that may just be the best Jane Austen film ever made... It's pitch-perfect, beautifully poised, faithfully honouring the original while brilliantly dramatising and completing it
London Evening Standard *****

In the past quarter-century or so, there have been too many Jane Austen movies and too few Whit Stillman movies... I'm happy to report, in any case, that the release of Love & Friendshipmitigates both the shortage and the surfeit. It's the Whit Stillman movie that some of us have been waiting a long time for, and also a Jane Austen movie that goes some way toward correcting the record of dull and dutiful cinematic Janeism
New York Times Critic's Pick

Kate Beckinsale is a devious delight... Beckinsale is a hoot to watch as a character with no redeemable qualities, except for her cunning ability to get what she wants. You can't help but love Lady Susan because of the evident joy she takes in being so duplicitous. Her energy is infectious. Despite its period trappings, Stillman's film never feels stilted, largely thanks to his bracingly modern heroine who takes no prisoners, and makes no apologies for her conniving behavior.
Guardian

A fresh, beguiling movie, and the wittiest Austen adaptation to grace the screen
The Times