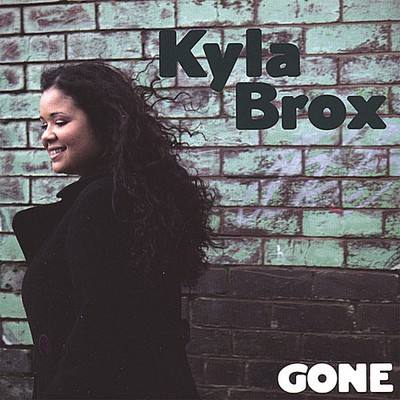 Kyla was born to sing. She grew up in Manchester, England, listening to her dad singing the blues and her mum singing opera, not to mention the soul and rock exploits of her four older siblings, so it seems inevitable that she would be bitten by the music bug. By the age of 3 she had her heart set firmly on becoming a singer (even asking for Chaka Khan's clothes, hair and voice for Christmas!) and by 1993, at 12 years old, she had already begun to sing in her father's band, the Victor Brox Blues Train (which he originally formed way back in the 60s with Kyla's mother, Annette). It's little wonder that Victor, multiinstrumentalist and singer (who fronted the Aynsley Dunbar Retaliation, and has played/recorded with the likes of Alexis Korner, Little Walter, Graham Bond, Muddy Waters, Champion Jack Dupree, Jimi Hendrix, Doctor John, Peter Green and Sonny Boy Williamson II...) has been a huge influence on Kyla's musical career, encouraging her to learn to play the flute and guitar, as well as sing. Tours, numerous gigs and festivals, and a handful of cds with the Victor Brox Blues Train, have ensured that Kyla has had the proper schooling in her craft. Fate played it's hand in 1993, when Kyla met the equally precocious, 13 year old multi-instrumentalist, Danny Blomeley, when he began to play bass in her dad's band. Danny was a seasoned musician even then, having formed the first of his own band aged 10 (in which he played electric guitar). The pair spent their teenage years honing their skills together in the Victor Brox Blues Train (then affectionately known as the 'Child Slavery Band' due to the extreme youth of the musicians!), until 1998 when Danny left the UK to travel the world with guitar in hand. His musical expertise was soon in demand from a diverse range of bands, playing jazz, blues, salsa and rock, on guitar, bass, mandolin and piano. When Danny arrived back in the UK in the spring of 2001, he and Kyla formed a duo. Danny's sensationally unique style on the acoustic guitar is the perfect complement to Kyla's incredible voice, and often leaves the audience wondering where the rest of the band are hiding! Their vibrant performances quickly made them a favourite in the clubs and venues around North West England, and the rest of the UK was soon to follow. With media interest, including Kyla featuring on the front covers of the UKs two biggest Blues dedicated magazines, Blues In Britain and Blues Matters! (who coined her nickname, 'The Voice') and radio play, including a live session for BBC Radio 2 (the UKs most listened to radio station), their reputation has grown and grown. The pair make a strong song-writing partnership and recorded their first album, 'Window', in 2003, a mixture of original and classic numbers. Kyla and Danny put together an electric band in 2002, with Danny on bass, Marshall Gill on electric guitar, Tony Marshall on saxophones and Phil Considine on drums. The Kyla Brox Band have recorded three studio albums, 'Beware', 'Coming Home' and most recently 'Gone', and also a powerful live album, 'Live at Matt & Phred's'. With their own special mix of funky, jazz-tinged blues, and armed with the two different touring outfits, they have caused a stir all over the world, performing concerts, and often headlining at festivals though out the UK, Europe, Australia and Asia, such as, The Great British Rhythm n Blues Festival (Europe's largest blues festival), Copenhagen Blues Festival, Blues autour du Zinc, (Paris), The Great Southern Blues and Rockabilly Festival (Australia), Phuket International Blues Festival (Thailand), Edinburgh Festival (Scotland) and Limavady Jazz & Blues Festival (Ireland), to mention a few. "...acoustic, intimate and powerfully emotive" Alan Pierce, Editor, Blues Matters Magazine. "Excellent!" Paul Jones, BBC Kyla and the band have recorded five albums to date, with a repetoire drawn from classic R&B songs and their own compositions. The Blues runs deep through their original material, but they build on that to create their own sound. They are anything but your average Blues band, yet they keep the fundamentals of the Blues alive; they play with a feeling that is infectious. 'I haven't honestly seen a better British Blues band for quite some time.' - Jenny Lyndsey, Blues in Britian Magazine. 'Destined to be Britians number one female singer.' - Pete Evans, Dragon Blues Festival. 'What a voice, what a talent, what performances!!!' - Darren Howells, Blues Matters! Magazine. 'Kyla's voice is up there with the greats.' - Chris Cordingley, Blues Matters! Magazine. '...an authentic Soul diva!...' - Mike Butler, City Life Magazine. 'Kyla Brox Rocks!' - Northern Territory News, Australia.

Here's what you say about
Kyla Brox - Gone.