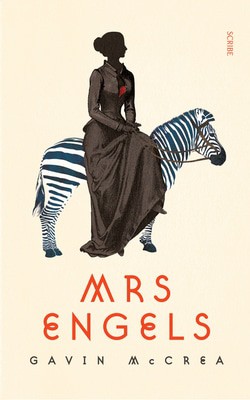 Love is a bygone idea, centuries-worn. There are things we can go without, and love is among them; bread and a warm hearth are not.

In September 1870 a train leaves Manchester bound for London. On board is Lizzie Burns, a poor worker from the Irish slums, who is embarking on the journey that will change her forever. Sitting in the first-class carriage beside her lover, the wealthy mill-owner Frederick Engels, the vision of a life of peace and comfort takes shape before her eyes: finally, at nearly fifty, she is to be the lady of a house and the wife to a man. Perhaps now she can put the difficulties of the past behind her, and be happy?

In Gavin McCrea's stunning debut novel, we follow Lizzie as the promise of an easy existence in the capital slips from her view, and as she gains, in its place, a profound understanding of herself and of the world. While Frederick and his friend Karl Marx try to spur revolution among the working classes, Lizzie is compelled to undertake a revolution of another kind: of the heart and the soul. Haunted by her first love, a revolutionary Irishman; burdened by a sense of duty to right past mistakes; and torn between a desire for independence and the pragmatic need to be taken care of, Lizzie learns, as she says, that 'the world doesn't happen how you think it will. The secret is to soften to it, and to take its blows.'

Wry, astute and often hilarious, Lizzie is as compelling and charismatic a figure as ever walked the streets of Victorian England, or its novels. In giving her renewed life, Gavin McCrea earns his place in the pantheon of great debut novelists.

Gavin McCrea was born in Dublin in 1978. His first novel, Mrs Engels (Scribe 2015) was shortlisted for the Desmond Elliott Prize and the Walter Scott Prize, and longlisted for the Guardian First Book Award. Gavin's articles have appeared in The Paris Review, The Guardian, The Irish Times, Catapult, and LitHub.

'This whirlwind of politics and personalities might become dizzying were it not stabilised by Lizzie's unmistakable voice. She begins life by grabbing what she needs in order to survive; she ends it having achieved deep self-knowledge. She tells her own story with a fierce wit and trenchancy, shot through with poetry ... McCrea's fictional speculation makes a fine symphony out of the silence that surrounds Lizzie Burns.'

'A terrific, startling read: compelling cast, involving story, historically transporting. Gavin McCrea has found an original and atmospheric way of giving resonant voice to the unsung Lizzie Burns. Beguiling, humorous, terrifyingly candid, clandestine agent in a world of hazardous political intrigue and the equally risky complexities of desire and love, McCrea's Lizzie Burns is an enthralling character who pulls us irresistibly into her fascinating world from her first words to her last.'

'Gavin McCrea has in his debut novel, Mrs Engels, done something I admire - he has found a character from a pivotal point in history whom I hadn't thought much about before, and with wit and humor and force settled her into my mind to stay.'

'Lizzie Burns' voice is pitch perfect. She is a magnificent creation, worthy of comparison to Joyce's Molly Bloom or Beckett's Winnie - her voice spills beyond the pages of the book, endless, vital, witty and enduring.'

'Gavin McCrea's witty, fictional interpretation of the women who loved Engels crackles and fizzes with life. Lizzie Burns and her sister Mary are the dark heart of a book which manages to reconfigure a key period in British history while also showing us the flawed, human side of a great thinker. Lizzie's narration is wonderfully yet lightly stylised, and this is an excellent debut.'

'In Mrs Engels, Lizzie Burns, an Irish-woman from Manchester, narrates the story in her own, deliberately non-modern idiom ... Lizzie provides an irreverent working-class take on all the intellectual posturing going on ... Gavin McCrea is triumphant in his exuberant debut in creating Lizzie's voice; she is dazzlingly convincing. Voices that feel authentic to their period and yet brim with life and verve are so rare that Mrs Engels is my book of the month.'

'[Gavin McCrea] deserves praise for his command of voice in Mrs Engels ... This is the best kind of historical fiction - oozing period detail, set in a milieu populated by famous figures and events about which much is known, but seen through the eyes of a central character who, due to her illiteracy, left no ready access to her experience in the form of letters or diary entries: a rich and accomplished first novel.'

'McCrea is triumphant in creating Lizzie's voice; she is dazzlingly convincing.'

'An assured, beautifully written debut, about a woman wiser than her lover perhaps, and slowly growing into herself - reminiscent of Molly Bloom in Ulysses. Eleanor Marx wrote that Lizzie was 'illiterate and could not read or write, but she was true, honest and in some ways as fine-souled a woman as you could meet'. Going by this, McCrea describes her perfectly.'

'Ambitious and imaginative ... McCrea breathes real life into a historical character of whom we know next to nothing.

'Lizzie Burns has been brought to life with exuberant force by the first-time author Gavin McCrea … She's shrewd, but having come from the slums, she finds managing household servants rather awkward, and she's ambivalent about life with the rich, powerful man who has made of Marx "something like a wife."'