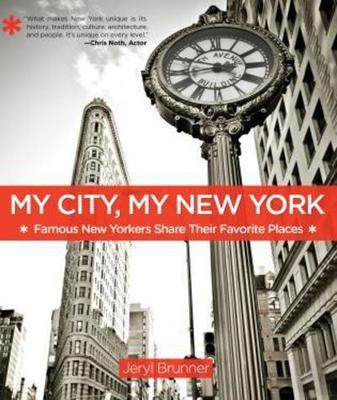 What do famous people love to do during their free time in the Big Apple?
Like all New Yorkers, even the well-known among them have cherished rituals that connect them to their city in a unique way-favorite restaurants, delis, museums, parks, galleries, landmarks, haunts, and hideaways. For one resident, it may be watching tango dancers on Saturday nights in Central Park; for another, it's riding a bike over the Brooklyn Bridge to get a slice of Grimaldi's pepperoni pizza and a view of the Manhattan skyline from across the East River. Perhaps it entails choosing from the many varieties of bread at Rock Hill Bake House in the Union Square Greenmarket or simply walking across 46th Street and ending up at the great Broadway hangout, Angus McIndoe.
In a refreshing step beyond the usual travel guides and tourist listings, My City, My New York quotes VIPs and gives readers something truly unique: a chance to experience Manhattan the way its most notable luminary residents do. The activities and establishments included are diverse, often eclectic, and, most-importantly, nonexclusive--you don't need to be a celebrity to enjoy them. While offering new and creative possibilities for exploration, My City, New York is also a love letter to the Big Apple and will touch even the most jaded New Yorkers. Celebrities include: - Matthew Broderick- Woody Allen- Bette Midler- Joan Rivers- Donald Trump- Chris Noth- Mayor Michael Bloomberg- Alex Rodriguez

Here's what you say about
My city, my New York - Jeryl Brunner.

For freelance writer and journalist Jeryl Brunner, a good interview is like a tango-complex, soulful, fiery, exciting and illuminating. She has been performing this dance for more than a decade, contributing to such publications as National Geographic Traveler, ForbesTraveler.com, Four Seasons, Gotham, People, Us Weekly, Hamptons, Brides, New York and In Style, where she worked on staff for nine years.
"The intrepid Jeryl Brunner" (as she was dubbed by In Style) is known for her prowess in securing quotes from celebs and is regularly called upon to get famous people to reveal themselves. For example PW Booklife.com, the consumer publication from Publisher's Weekly, hired her to ask notable authors, actors and directors like Frank McCourt, Wynton Marsalis, David Cronenberg and Ruth Reichl about a book that changed their life.
Brunner has written cover stories about Chris Noth, Dylan McDermott and Julianna Margulies for Travel Savvy and Hamptons. She profiled notable New Yorkers for Gotham, including
Le Cirque owner, Sirio Maccioni, Anthony Bourdain, Vanity Fair writer Amy Fine Collins, famed nightclub owner Amy Sacco, noted chocolatier Jacques Torres, and has authored travel pieces for bridal magazines and ForbesTraveler.com. For several years, she had a weekly advice column for Woman's World magazine, in which she asked celebrities and other luminaries to answer readers' questions. For example, Governor Arnold Schwarzenegger advised on creating a winning PTA campaign strategy and Wes Craven counseled on how to sit through a scary movie. Brunner joined In Style in its infancy in 1994, working as a reporter. In 1999, she was promoted to staff correspondent, where she wrote items for nearly every section of the magazine. One of her regular columns was "On the Phone," where she gave a celebrity a cell phone and called the star at random during the week. She also edited and wrote "Lookback," the final page of the magazine, which featured vintage photos of celebrities. Every month, she had the challenge of writing a complete story about a star at the time the picture was taken, in just 180 words.
A veteran party reporter, Brunner wrote more than 40 party stories at In Style and has covered events for Us Weekly, People and Life & Style. Her reporting has taken her to the Lord of the Rings premiere in Wellington, New Zealand, to a luxurious spa in Chiang Mai, Thailand, and to the hospital where Vincent Van Gogh painted Starry Night. Brunner has contributed to the book Henry Dunay: A Precious Life about famed jewelry designer, Henry Dunay, writing chapters about the designer's esteemed clientele and his family. Brunner has interviewed scores of celebrities, including Meryl Streep, Mel Gibson, Harrison Ford, Jodie Foster, Nicole Kidman, Gwyneth Paltrow, George Clooney and Charlize Theron. Her pieces have been quoted in Page Six and in Liz Smith's column. Visit her Website at www.jerylbrunner.com.

"In focused sections ranging from parks to nightlife, 300 famous New Yorkers-including actors, athletes, authors, musicians, and politicians-relay their favorite thing about New York City. Salman Rushdie and Gayle King are both fond of Shake Shack's caramel milkshakes, Woody Allen reveals where he performs with his jazz band every Monday night, several folks mention the excellent Hudson River bike path, and Sam Champion of Good Morning America even gives a tour of his favorite spots along that route. In the shopping chapter, costume designer William Ivey Long lists some of the Antiques Garage finds that have inspired his work. In the final chapter, stars reveal their favorite landmarks, including the Metropolitan Museum of Art to the Frick Collection, Yankee Stadium, and Grand Central Station. With addresses and contact listings for locations provided (when applicable), this book is an excellent resource for tourists, while even lifelong New Yorkers will find some new places to explore." --Publishers Weekly (11/28/11)