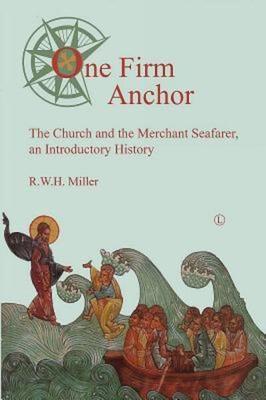 One Firm Anchor is a fantastic introduction to the history of chaplaincy at sea and what preceded it. Miller argues that the fractious period of the Reformation was pivotal: before, there was no formal ministry and only scattered welfare provision for seafarers; afterwards, chaplains were increasingly found at sea, and seafarers became increasingly the recipients of the modern approach to mission. One Firm Anchor adds substantially to the seminal work of Peter F. Anson and Roald Kverndal.Published to coincide with the 2012 International Conference of the Apostleship of the Sea, this is an important new work for all involved in seafaring as well as maritime historians.

Currently a Catholic Priest in the west of England, Robert Miller has been a long-time student of Maritime Social History and member of the Society for Nauthical Research and the International Maritime Economic History Association. He has worked for both the Missions to Seaman and the Apostleship of the Sea. He is the author of Priest in Deep Water (2010).

'This extensive introductory history goes beyond anything previously written on the subject in scope and detail. [...] One Firm Anchor demonstrates that maritime history is more than the study of seas and ships, and that religious practices of the men on board represented an integral part of life at sea.'
Catholic Southwest, November 2012

"[...] an invaluable contribution to our knowledge of maritime religious history in the medieval era. ... [Miller] provides both invaluable information and a high level of densely detailed documentation. [...] a great and lasting service to maritime mission studies."
Roald Kverndal, in The Mariner's Mirror, 30 April 2013

'...[Miller] provides both invaluable information and a high level of densely detailed documentation... Miller has, with his new book, given a great and lasting service to maritime mission studies...'
Roald Kverndal, The International Quarterly Journal of the Society for Nautical Research, Vol. 99.2, May 2013

"This very meticulously researched work by Fr Miller should be a welcome addition to the library of historians and theologicians and also to some general 'maritime' readers ... This book is by no means a light read but should in time become a definitive work on the subject, making Fr. Miller a very worthy successor to the late Fr. Philip Caraman SJ ..."
Primrose Peacock, in Unity Magazine, No. 147

'One Firm Anchor is more than a mere introduction to maritime mission work and the religious life of sailors. Instead, R. W. H. Miller has utilized a host of primary documents to write a thought-provoking missiology (study of missions) that incorporates not only the Catholic Church's efforts to administer to the spiritual needs of seafarers but also similar efforts by other evangelical and charitable organizations, both denominational and nondenominational.'
Lori Bogle, The Catholic Historical Review, Vol.100, No.1, January 2014

"The present volume [...] provides what should become a standard work for those interested in religion and the merchant seafarer. [...] Miller aptly shows the ability of those promoting religious outreach to merchant seafarers to adapt to the ever-present but ever-changing maritime community and maritime industry. He has provided readers with a rich and timely overview and history of Christian outreach to "those who go down to the sea in ships" (Psalm 107:23). It is a book well worth reading."
Timothy J. Demy, Professor of Military Ethics, U.S. Naval War College, in The Northern Mariner/Le marin du nord, No. 4, October 2013

"The subtitle of R.W.H, Miller's book One Firm Anchor: The Church and the Merchant Seafarer, an Introductory History gives a good idea as to its contents. There is a concentration on the Roman Catholic Church, particularly in later chapters, but other work, including that of Anglicans, is also covered."
-Church Times, 13 November 2015