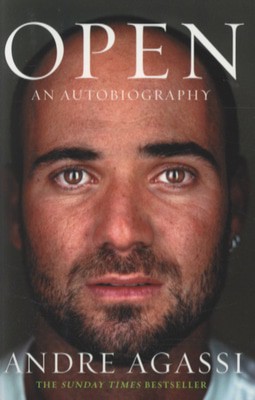 He is one of the most beloved athletes in history and one of the most gifted men ever to step onto a tennis court - but from early childhood Andre Agassi hated the game.

Coaxed to swing a racket while still in the crib, forced to hit hundreds of balls a day while still in grade school, Agassi resented the constant pressure even as he drove himself to become a prodigy, an inner conflict that would define him. Now, in his beautiful, haunting autobiography, Agassi tells the story of a life framed by such conflicts.

Agassi makes us feel his panic as an undersized seven-year-old in Las Vegas, practicing all day under the obsessive gaze of his violent father. We see him at thirteen, banished to a Florida tennis camp. Lonely, scared, a ninth-grade dropout, he rebels in ways that will soon make him a 1980s icon. By the time he turns pro at sixteen, his new look promises to change tennis forever, as does his lightning fast return.

And yet, despite his raw talent, he struggles early on. We feel his confusion as he loses to the world's best, his greater confusion as he starts to win. After stumbling in three Grand Slam finals, Agassi shocks the world, and himself, by capturing the 1992 Wimbledon. Overnight he becomes a fan favorite and a media target.

Agassi brings a near-photographic memory to every pivotal match, and every public relationship. Alongside vivid portraits of rivals, Agassi gives unstinting accounts of his brief time with Barbra Streisand and his doomed marriage to Brooke Shields. He reveals the depression that shatters his confidence, and the mistake that nearly costs him everything. Finally, he recounts his spectacular resurrection and his march to become the oldest man ever ranked number one.

In clear, taut prose, Agassi evokes his loyal brother, his wise coach, his gentle trainer, all the people who help him regain his balance and find love at last with Stefanie Graf.

With its breakneck tempo and raw candor, Open will be read and cherished for years. A treat for ardent fans, it will also captivate readers who know nothing about tennis. Like Agassi's game, it sets a new standard for grace, style, speed and power.

Here's what you say about
Open - Andre Agassi.

Andre Agassi played tennis professionally from 1986 to 2006. Often ranked number one, he captured eight Grand Slam singles championships, tying him for seventh on the all-time list, and he's the only man to win a career 'Golden Slam' - all four Grand Slam singles titles plus the Olympic gold medal. He also compiled one of the best records ever by an American in the Davis Cup. As founder of the Andre Agassi Charitable Foundation, he has raised more than $85 million for the Andre Agassi College Preparatory Academy, an acclaimed K-12 charter school for underprivileged children in his hometown, Las Vegas. He lives in Las Vegas with his wife, Stefanie Graf, and their two children.

'Honest in a way that such books seldom are . . . An uncommonly well-written sports memoir.'
-Charles McGrath, The New York Times

'Agassi weaves a fascinating tale of professional tennis and personal adversity . . . His tale shows that success is measured both on and off the court.'
-Doree Shafrir, New York Post