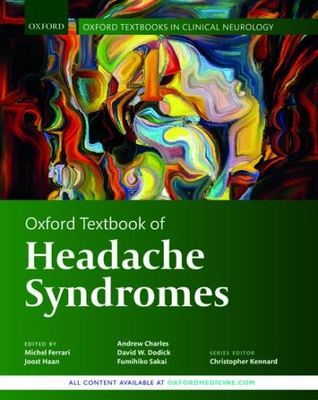 Headache syndromes rank amongst the most common presenting symptoms in general practice and neurology, affecting up to 15% of the adult population. Part of the Oxford Textbooks in Clinical Neurology series, the Oxford Textbook of Headache Syndromes provides clinicians with a definitive resource for diagnosing and managing patients with primary and secondary forms of headaches, either as isolated complaints or as part of a more complex syndrome.Split into 7 key sections with 59 chapters, this comprehensive work discusses the scientific basis and practical management of headache syndromes in a logical format. Each chapter is written by international experts in neurology who share their research and extensive experience by providing a wealth of practical advice for use in clinical situations.
In addition, all content is up-to-date and chapters incorporate discussions on the latest International Classification of HeadacheDisorders 3rd edition when relevant.

Here's what you say about
Oxford textbook of headache syndromes - M. D. Ferrari.

Professor Ferrari was awarded the quinquennial Winkler Medallion for Excellence in Research from the Dutch Neurological Association in 2005, the Vici Innovational Research Personal Incentive Schema Award from the Netherlands Organisation for Scientific Research in 2004, and the Spinoza Life Time Achievement Premium in 2009. In 2017 he received the 10-year Gravity Award for his work for the Netherlands Organ-on-Chip Initiative. He is an Elected Fellow of the Royal College of Physicians (FRCP)
and the American Neurological Association (FANA), and an Honorary Member of the Colombian Neurology Society and the International Headache Society.

Joost Han, MD, PhD, BA, is an Associate Professor of Neurology at Leiden University Medical Centre. He received his medical degree in 1982, his specialty certificate in Neurology in 1988, and his doctorate in clinical Neurophysiology in 1990. Between 2001 and 2007, Dr Haan was a member of the Council of Dutch Neurologists. Having co-authored over 150 peer-reviewed publications and several books on clinical genetics, Dr Haan serves on the scientific board of several Dutch scientific
organisations and the editorial board of a number of journals. The main topics of his research are the genetics of headache (migraine, cluster headache), haemorrhagic stroke (cerebral amyloid angiopathy), and ischaemic stroke (CADASIL).

Andrew Charles, MD, is Professor and Director of the Headache Research and Treatment Program in the Department of Neurology at the David Geffen School of Medicine at University of California, Los Angeles (UCLA). In 2013 he was named the Meyer and Renee Luskin Chair in Migraine and Headache Studies at UCLA. As Director of the Headache Research and Treatment Program, Dr. Charles seeks to advance headache medicine through education, clinical research, and patient care. From 2011-2013 he was
Co-Chair of the NINDS Common Data Elements Project Group for Headaches. He is an associate editor of the journal Cephalalgia, and serves on the board of directors of the American Headache Society and the board of trustees of the International Headache Society (IHS).

Mr. Dodick has authored more than 300 peer-reviewed publications and co-authored 8 books. He is Editor in Chief of Cephalalgia.

Fumihiko Sakai, MD, is Professor at Saitama Medical University. Professor Sakai obtained his medical degree from Keio University and served as a research fellow with the Department of Neurology at Baylor College of Medicine and a clinical fellow at Keio University Hospital. In 1978 and 1979, he received the 13th and 14th Harold G. Wolff awards from the American Headache Society. He has served as a board member and honorary member of the Societas Neurologica Japonica and as President and
Honorary Life Member of the International Headache Society (IHS).

Professor Sakai is currently a member of the board of the Japanese Headache Society, Director of Saitama International Headache Center, and a member of the Scientific Advisory Board at Trigemima.

This book is the quintessential reference text on headache medicine. As a neurology resident pursuing headache specialization, I anticipate consulting this book often. Although headache is a constantly evolving field, this multi-authored text is up to date and extremely comprehensive.