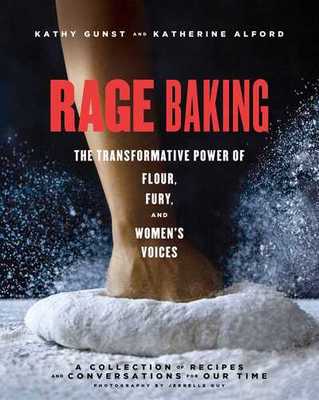 50+ recipes, short essays, interviews, and quotes from some of the best bakers, activists, and outspoken women in our country today

For many women, baking now has a new meaning. It's an outlet for expressing our feelings about the current state of American politics and culture. It's a way to deal with our stress and anxiety, and, yes, rage and fury.

Rage Baking offers more than 50 cookie, cake, tart, and pie recipes-with beautiful photography by Jerelle Guy-to help relieve these emotions. And it goes further. Inside you'll also find inspirational essays, reflections, and interviews with well-known bakers and impassioned feminists and activists alike to help motivate you to take action and organize in your communities.

Timely, fun, and creative, this cookbook speaks to both skilled and beginner bakers who are looking for new ways to use their sweetest skills to combine food and activism. Rage Baking brings women together with humor and passion as a way to defend, resist, and protest.

Here's what you say about
Rage baking - Kathy Gunst.

Katherine Alford has a proven track record in food. She ran aNew York Times4-star kitchen, has been a Greenmarket Manager, as well as instructor and director of Peter Kump's Cooking School (now Institute of Culinary Education). She spent the last twentyyears at the Food Network, ultimately, as the Senior Vice President of Culinary, where she led the culinary team for TV, digital, and print. She ran the test kitchen that created multiple cookbooks that were IACP finalists,Food & Wine Best of the Best, andNew York Timesbestsellers. She oversaw recipe development and had a column inFood NetworkMagazine, the #1 food magazine with a monthly reach of over 1.3 million readers. She grew up in Washington, DC, in a politically active family; her passions are food and politics.

"Indeed it is a cookbook, but Kathy Gunst and Katherine Alford'sRage Bakingis also a genius idea-the very text that we, an army of citizen bakers, have been waiting for. Among more than 40 contributors to this feisty and inspiring collection of recipes, essays and interviews are luminaries Ruth Reichl, Ani DiFranco, Dorie Greenspan and Rebecca Traister. There are recipes like "Power Muffs" and "No More Sheet Cake." The recipes, like the women behind them, represent diverse culinary traditions, from cornbread to bulgur flatbread to challah to focaccia. But they all share one ingredient: "I am anger wrapped in hopelessness wrapped in despair wrapped in more anger,"writes Tess Rafferty. 'And when I can't stand it anymore, I cook.' "-BookPage

"In this debut cookbook, food writers Gunst and Alford collect solid recipes and passionate essays from women suffering through the #MeToo era. Chapters are traditionally organized but given rousing names (one on breads is "Whisk, Fold, Knead, Rise Up") and illustrated with inspiring photos of women's marches from the 1960s to the 2000s. Recipes are functional and clever: Vallery Lomas, who wonThe Great American Baking Showin 2017 only to have the show canceled and not air after a judge was accused of sexual harassment, offers simple lemon bars that don't require precooking the curd for the filling. The authors often artfully integrate their subjects: Alford provides an honest look at women's experiences in restaurant kitchens and suggests a maple-walnut pull-apart bread ("what better metaphor for my growing rage as the patriarchy works overtime"), and Katherine Gunst of NPR'sHere & Nowrecalls her dismay over Maine senator Susan Collins's yes vote for Supreme Court nominee Brett Kavanaugh and how baking "temporarily restor[ed] my belief in the positive transformation of things" (she offers LGBTQ-inspired rainbow cookies). Attempts to politicize baked goods, including a tenuous connection between red velvet cake andThe Handmaid's Tale, can read like a reach, but they serve as a primal scream. This volume of accessible recipes squarely hits the target."-Publishers Weekly

"Baking, Politics, and the Power of Women Combine in the New Cookbook Rage Baking. It's a book that speaks about the power women can and are finding inside the kitchen and ultimately celebrates women through food…. Rage Baking is much more than a simple cookbook, though. It's a community. There are recipes from renowned bakers likeDorie Greenspan, Carla Hall, and Virginia Willis, as well as from [authors] Gunst and Alford. You'll also find essays, poems, and quotes from a diverse group of women bakers, writers, comedians, and activists…. Some of the writing is serious, some surprisingly funny, and some will make you angry. Still, there's a lot of hope to be found in the book….It's a book that, as we dive headfirst into this year's election season, you might want to share with all your friends."-Bridget Shirvell, marthastewart.com

"Rage Baking Is The Political Cookbook That Has The Food World Buzzing. Some people eat when they are stressed out over the state of the world. Others drink. But bakers, well, they've got to bake. And now, they've got their own cookbook … already an instant hit."-Micheline Maynard, Forbes.com, Editor's Pick

"I'm going to give this book to so many people this year. Baking and politics combine in this upcoming book from Maine resident Kathy Gunst and Katherine Alford, who teamed up on this important and timely book, which will be released in time for Women's History Month. This collection of cookies, pies, cakes and breads includes essays and interviews with leading bakers, activists, writers and entertainers including so many inspiring women like Dorie Greenspan, Ruth Reichl, Carla Hall, Preeti Mistry, Julia Turshen, Pati Jinich, Vallery Lomas, Von Diaz, Genevieve Ko, and writers like Rebecca Traister, Pam Houston and many more."-Rachel Forrest, Herald-Mail Media