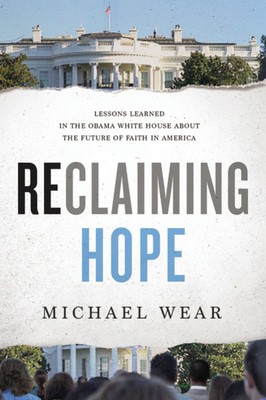 "An important and extremely timely book...Get it, read it, and talk to others about it." --Timothy Keller.

In this unvarnished account of faith inside the world's most powerful office, Michael Wear provides unprecedented insight into the highs and lows of working as a Christian in government. Reclaiming Hope is an insider's view of the most controversial episodes of the Obama administration, from the president's change of position on gay marriage and the transformation of religious freedom into a partisan idea, to the administration's failure to find common ground on abortion and the bitter controversy over who would give the benediction at the 2012 inauguration.

The book is also a passionate call for faith in the public square, particularly for Christians to see politics as a means of loving one's neighbor and of pursuing justice for all. Engrossing, illuminating, and at time provocative, Reclaiming Hope changes the way we think about the relationship of politics and faith.

"A pre-Trump book with serious questions for our politics in the age of Trump...More necessary than ever before." -- Sojourners

"Should be read by Democrats and Republicans, liberals and conservatives, and all who are concerned by the state of our politics." --Kirsten Powers, USA Today columnist and CNN political analyst

"An important contribution in this age of religious and political polarization." --J.D. Vance, author of Hillbilly Elegy

"A lifeline for these times." --Ann Voskamp, author of One Thousand Gifts and The Broken Way

"We can hope, and this book can help us." --Russell Moore, president of the Ethics & Religious Liberty Commission of the Southern Baptist Convention

Here's what you say about
Reclaiming hope - Michael R. Wear.

Michael Wear is the founder of Public Square Strategies LLC, a consulting firm that helps businesses, non-profits, foundations, and Christian organizations at the intersection of faith, politics, and culture. Wear directed faith outreach for President Obama's historic 2012 re-election campaign and was one of the youngest White House staffers in modern American history, leading evangelical outreach and helping manage the White House's engagement on religious and values issues, including adoption and anti-human trafficking efforts. He holds an honorary position at the University of Birmingham's Edward Cadbury Centre for the Public Understanding of Religion, and serves on the national board of Bethany Christian Services. He lives with his wife, Melissa, in Washington, DC.

'This is an important and extremely timely book. It is partly a memoir, partly a reflection on the relationships between faith and governing power, and partly a road map for navigating the unprecedented social and cultural changes we are facing. It's readable and thought-provoking. Get it, read it, and talk to others about it.'
Timothy Keller, author of Reason for God

'This is an unusually important and moving book. Reclaiming Hope is a fascinating portrait of a critical moment in American public life, exploring the role of Christianity--and faith more broadly--during the Obama era. Part memoir, part exhortation, Michael Wear offers us an intimate look at the power and relevance of religion at a time when so many have discounted it. The reflections on President Obama's evolution on gay marriage are by themselves worth the price of admission. Marked in parts by disillusion, Wear ends the book with a powerful meditation on hope that, while directed to Christians, will appeal to anyone interested in the complex intersection of faith and politics.'
Shadi Hamid, senior fellow at Brookings Institution and author of Islamic Exceptionalism

'Reclaiming Hope is both a fascinating insider's look into the Obama administration's faith-based initiatives and a stirring call for Christians--indeed for Americans of all faiths--to rediscover a sense of hopefulness. Even as we find ourselves in a crisis of disillusionment, and even despair, about the state of American politics, Wear reminds us that we must hold fast to the belief that we can change our country and our world for the better. Each of us would do well to adopt at least a bit of Wear's realistic hopefulness.'
E. J. Dionne Jr., author of Why the Right Went Wrong and Souled Out

'Michael Wear's Reclaiming Hope is an engaging, sympathetic but not uncritical account of life in the Obama White House. Wear cares about politics, but he cares about his Christian faith even more. The result is a balanced, thoughtful look at how politics and faith intersect, what the pitfalls and possibilities are, and why we cannot give up hope. At a time when too many Christians in public life are discrediting their public witness, Michael Wear is offering an admirable alternative.'
Peter Wehner, senior fellow at the Ethics and Public Policy Center and former senior advisor to President George W. Bush

'More than a story about how faith and politics entangle in the rarified atmosphere of the White House, this fine memoir is also a road map for how we can pick up the broken pieces of our political life and reassemble a national commitment to a common good.'
Mike McCurry, White House Press Secretary 1995-98 and professor of Public Theology at Wesley Theological Seminary

'Reclaiming Hope should be read by Democrats and Republicans, liberals and conservatives, and all who are concerned about the state of our politics. Wear's refreshingly earnest book offers rare insight that just might help us reject the harsh polarization of today's politics, embrace a redemptive faith, and find hope once again.'
Kirsten Powers, USA Today columnist and CNN political analyst

'Michael Wear is a man of deep faith who clearly brought his love for Jesus to his work in the White House. Reclaiming Hope offers important insight about his time working in the public square for the legitimate and necessary place of both faith and people of faith in today's political environment, and it deserves serious attention.'
His Eminence Timothy Cardinal Dolan

Michael Wear makes a powerfully compelling case for engaging the intersection of politics and religion. Drawing from his personal and singular experience in the White House under the Obama administration, Wear writes a lifeline for these times--that despite any personal differences, hope can unite. The pages in your hand could give you hope and lead and guide us forward as a nation. We can all reclaim hope and carry it with us.
Ann Voskamp, New York Times bestselling author of One Thousand Gifts and The Broken Way

'Michael Wear's grasp on how sacred and secular coexist is second to none. His tone is both loving and challenging. A must read.'
Propaganda, artist and author

'According to my friend Michael Wear, too many of us left the party early! I've known Michael for years and greatly appreciate his commitment to the church and his personal faith in Jesus. Reclaiming Hope will certainly give you a fresh perspective on politics--but, more importantly, it may also give you a fresh perspective on faith.'
Andy Stanley, senior pastor of North Point Ministries