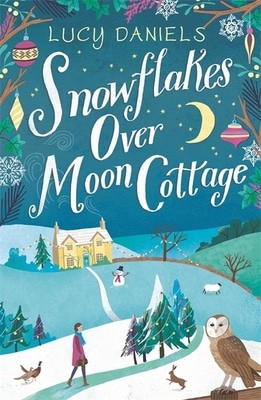 'A comforting Christmas read' - Woman's Own

It's Christmas-time in the little Yorkshire village of Welford, and the first snowflakes are just starting to fall.

As far as Susan Collins is concerned, this Christmas is all about quality time with her family, especially her son Jack. After a string of terrible dates she's given up on love, and Susan's certainly got plenty to keep her busy.

That is, until she meets handsome children's author Douglas Macleod. Dishevelled in appearance with bright red hair he is the opposite of Susan's usual type, but an undeniable spark soon lights up between them. But then Michael Chalk, Jack's father, turns up on the scene wanting to be a family again - and Susan finds herself torn.

With snow settling on the ground and the big day fast approaching, who will Susan and Jack be choosing to spend Christmas at Moon Cottage with this year?

'A good way to escape from real life' Amazon Reviewer

'A lovely book to curl up with.' Amazon Reviewer

'Waiting now for the next one' Amazon Reviewer

Here's what you say about
Snowflakes over Moon Cottage - Lucy Daniels.

Lucy Daniels is the author of the bestselling children's book series, Animal Ark, which have sold nearly 3 million copies in the UK alone, and more recently, the Animal Ark Revisited series for adults. Lucy Daniels is the pseudonym for the writing partnership of celebrated author Victoria Holmes and real-life vet, Sarah McGurk.

Victoria Holmes grew up on a farm surrounded by animals, and started writing at a young age. After studying English at the University of Oxford, Vicky worked with horses for a year before becoming an English teacher, then moved on to become an editor at Working Partners in London. Over the past two decades, Vicky has been the creator and editor of dozens of well-known series, including Animal Ark, Heartland, Rainbow Magic, Puppy Patrol, Chestnut Hill and, most famously, Warrior Cats. As the creator, editor and, later, author, of the Warrior Cats books, Vicky has travelled around the world to meet fans, appeared in numerous TV and radio interviews, and had a tiny taste of the celebrity lifestyle. She is still happiest at home in her medieval thatched cottage in the Somerset countryside, with her beloved horse Nick for company.

Sarah McGurk grew up in the Yorkshire Dales, and was inspired by James Herriot to become a veterinary surgeon some thirty years ago. A few years after she qualified, Sarah realised she wanted to follow him further, into the world of veterinary writing. She began with short stories, then longer works of fiction, related to her work in general practice and in emergency and critical care. Her special interests include anaesthesia and pain relief, and low-stress techniques in small animal handling. Sarah currently lives in Norway, where she works in a local veterinary practice and speaks Norwegian fluently.

A comforting Christmas read
Woman's Own

'A stunning, emotional, beautiful tale of friendship, love, and the importance of being who you need to be. I laughed, I cried, and I became completely ensnared, and I cannot recommend it highly enough - it really has got it all!!'
Books of All Kinds

'Just the right amount of nostalgia... wonderful and very poignant'
The World is a Book Blog

'The romance, tragedy and drama play[s] out alongside some deeply poignant animal stories...an absolute must read for animal lovers'
The Book Bag

Praise for the Hope Meadows series
: