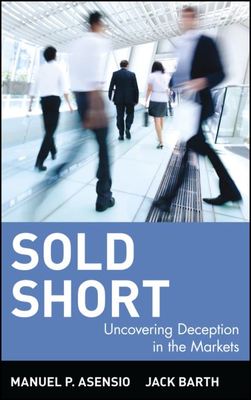 A revealing expose by one of today's most successful and controversial speculators
Short-selling, or betting on a drop in the price of a stock, has been described by its many opponents as everything from shady to downright evil. And no one today personifies the practice better than short-seller extraordinaire Manuel Asensio. Though he has been branded in the press as a market saboteur, Asensio staunchly defends his practices, claiming that, above all, he is out to expose rampant fraud being perpetrated by unscrupulous stock promoters. Is Asensio a "Minion of Satan" as they say in the online chat rooms, or is he really a misunderstood guardian angel of free market capitalism? In this tell-all account, Asensio offers readers a lively narrative, peppered with unforgettable anecdotes such as the story of why he shorted Diana, General Nutrition, Solv-Ex, Turbodyne, and many other high-profile stocks. And he arms investors with proven techniques for reducing the inherent risks of short-selling while maximizing returns. Clearly, Asensio invites both praise and criticism, but his methodology works, and Sold Short is a compelling and fascinating read about this often mysterious side of the market--and one of the most controversial individuals behind it.
Manuel Asensio (New York, NY) is founder and Chairman of Asensio & Co., Inc. He has over twenty years of corporate finance and research experience. He has been featured in Business Week, the Wall Street Journal, Barron's, Fortune, Forbes, Worth, the New York Times, New York magazine, and the New Republic, among other leading national and international publications.

Here's what you say about
Sold short - Manuel Asensio.

Manuel P. Asensio is founder and Chairman of Asensio & Co., Inc. He has over twenty years of corporate finance and research experience. He has been featured in Business Week, Fortune, Forbes, Worth, the New York Times, New York magazine, and the New Republic, among other leading publications. Mr. Asensio received his BS in economics and finance from The Wharton School at the University of Pennsylvania and holds an MBA in investment management from Harvard University Graduate School of Business.
JACK BARTH is a freelance writer and journalist. Mr. Barth's articles have been published in Worth, Spy, Outside, Premiere, and Rolling Stone. In addition, he has written for television, including episodes for The Simpsons and for the Comedy Channel. He is the author of four books: Roadside Elvis, Roadside Hollywood, American Quest, and Roadside America.

He's in the Index, Too
Look for Wall Street and business-media types to scan index pages in the just-published Sold Short: Uncovering Deception in the Markets by famous short-seller Manuel P. Asensio. He delights in naming dozens of analysts, journalists and brokerages he says helped pump up dubious stocks that later tanked after he issued withering research reports. On the next-to-last page Asensio finally mentions the $75,000 fine he paid regulators last year to settle charges that, among other things, he and his Asensio & Co. overstated their own investment record.
--Forbes May 28, 2001

Short-sellers have a natural appeal to journalists. Members of
both occupations require deep scepticism about the motives of
the rich and powerful, and both engender a black humour that
can be off-putting to the innocent and uninitiated.

Short-selling is the sale of borrowed or never-owned securities
with the intention of profiting from a decline in their price. The
profit is made when the shares price has declined, and the
short-seller is able to repay the loan of the securities or makes
good the promise to deliver with securities bought at a lower
price.

The profit is limited to the price of the security at the time the
short sale is made; the loss can be as high as a security's price
can rise.

There are quiet, behind-the-scenes short-sellers - and then
there is Manuel Asensio. His brokerage house, Asensio
Company, specialises in executing short sales for clients, some
of which are almost certainly investment funds in which he has
an interest.

He searches for frauds and simple overvaluations in the
securities market, sells them short on behalf of his clients, and
then trumpets their shortcomings to the world.

Along with other journalists, I have made use of Asensio's
material, though not without checking it first. When I did, it
turned out to be quite reliable.

Not everyone has the same feeling about Asensio. He is
regularly sued by promoters and others connected with the
objects of his research and mockery. He has, however, only
paid one fine to the National Association of Securities Dealers,
and believes he has been vindicated after he agreed to that
settlement.

Now he has written a book, Sold Short, to tell the world how he
does it.

To use the type of military metaphor popular on Wall Street,
Asensio is the sort you would choose to lead an infantry charge
against a fortified position. However, as another short-seller
says: "I think I'd prefer to wait for the armoured division."

Even though the book has a professional co-author, Jack Barth,
the tone is pure Asensio: attack, attack, attack. Promoters are
scum. Establishment companies are corrupted by greed. A
typical sentence reads: "The bad guys were on the other side of
the river, laughing, with their saddlebags full of loot." Asensio
was wise to choose short-selling over a career in the diplomatic
service.

Sold Short is most useful for the detail it provides on the stock
promoter's bag of tricks. You can get more stringent, academic
detail on securities valuation from such classics as Graham and
Dodd's Securities Analysis, but the standard works are not as
revealing on the social, as well as the financial, patterns that
fraud takes.

Another short-seller said Asensio's analysis was good, but that
the market values of the companies he goes after were too
small to have the liquidity a large fund needed.

Asensio's response was an unrelenting lecture on the market
caps of his targets along with cutting inferences about the
courage and work habits of the unnamed commentator.

Sold Short is a helpful book, though not a literary masterpiece.
The reader and the market participant should be fully aware that
Asensio is talking up (or down) his position. But he's very
straightforward about that.