Something beginning with P - Seamus Cashman 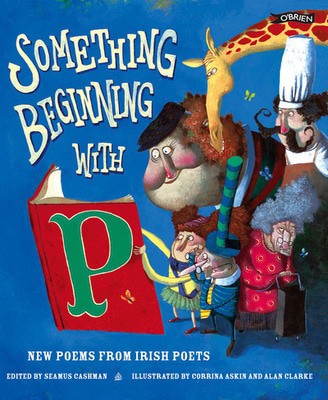 Published by The O'Brien Press in association with Poetry Ireland. Supported by the National Lottery through the Arts Council of Northern Ireland.

Seamus Cashman established Wolfhound Press Ltd in 1974 as a literary and cultural publishing house, and as publisher until 2001 won an international reputation for the press, earning many design, publishing and children's book awards over the years. A former teacher and book editor, his own published works include two co-edited and lasting volumes, Irish Poems for Young People and Proverbs and Sayings of Ireland. He is author of three poetry collections; That Morning Will Come, Carnival, and Clowns and Acrobats. He works as an independent publishing consultant.

'Top-class illustration and design complete a must-have package for every school, library and home.'

'If some word-gobbling wizard came and snatched all the poems out of this new anthology, if would still be a pleasure to browse through. Every page [is] a dramatic, often zany display of characters, creatures and tumbling objects, all in spectacular colours. This anthology sets no boundaries to where the imagination can go.'

'a daring innovation by Ireland's top publisher of children's literature.'

'The most marvellously produced piece of work I have seen in a long time. An investment -- a brilliant book'

'A dream for parents hoping to inspire a love of poetry, and a book that will never be outgrown.'

'The poems are written for children, which suits all of us. Buy it for your favourite niece. Keep it for yourself.'

' this is a fantastic gift and one for keeps. It will be dipped into and enjoyed for many years to come. And don't be put off when it says it's for children: adults will love it too.'

'The range of subjects covered is extraordinary and every age group, from young children to adolescents will find something to engage their minds.'

'More than 100 poets combine their talents to give us this exquisitely produced anthology, with dazzling illustrations by Corrina Askin and Alan Clarke: poems playful, poems profound.'

'The numerous colourful illustrations are in themselves works of art and add magnificently to the words of the poems.'

'buy this book but don't just buy one copy; buy at least two: one to keep by you to dip in and out of and one to put away. It's sure to be a collector's item. And the better get another few in case anyone makes off with your other copies.'

'This book is a great party and a parade of Irish poets and poems, lavishly illustrated on every page.'

'a sumptuous collection of new work by Irish poets. Like all the best anthologies, it offers poems that extend one's definition of what the art can do, especially for children nine years old and upward. It is full of near-the-knuckle honesty, as in Rita Ann Higgins's poem about her father. Many of the poems, such as Michael Longley's "Hallowe'en", mix the playful and the disturbing. Sydney Bernard Smith's "The Day the Dalai Lama met the Pops" is pure genius, and cries out to be set to music and sung on Orange Day parades. This book should be in all schools where English (and Irish) is spoken. It is a place where poets and children meet, with no condescension from the former. Buy two copies -- one will be stolen.'

'This book is a great party and a parade of Irish poets and poems, lavishly illustrated on every page.'

'buy this book but don't just buy one copy; buy at least two: one to keep by you to dip in and out of and one to put away. It's sure to be a collector's item. And the better get another few in case anyone makes off with your other copies.'