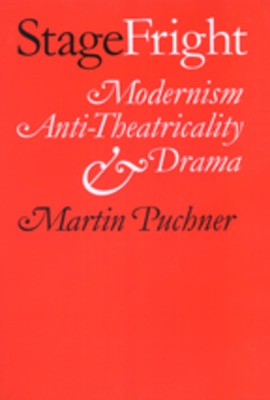 Grounded equally in discussions of theater history, literary genre, and theory, Martin Puchner's Stage Fright: Modernism, Anti-Theatricality, and Drama explores the conflict between avant-garde theater and modernism. While the avant-garde celebrated all things theatrical, a dominant strain of modernism tended to define itself against the theater, valuing lyric poetry and the novel instead. Defenders of the theater dismiss modernism's aversion to the stage and its mimicking actors as one more form of the old "anti-theatrical" prejudice. But Puchner shows that modernism's ambivalence about the theater was shared even by playwrights and directors and thus was a productive force responsible for some of the greatest achievements in dramatic literature and theater.A reaction to the aggressive theatricality of Wagner and his followers, the modernist backlash against the theater led to the peculiar genre of the closet dramaa theatrical piece intended to be read rather than stagedwhose long-overlooked significance Puchner traces from the theatrical texts of Mallarm and Stein to the dramatic "Circe" chapter of Joyce's Ulysses. At times, then, the anti-theatrical impulse leads to a withdrawal from the theater. At other times, however, it returns to the stage, when Yeats blends lyric poetry with Japanese Nh dancers, when Brecht controls the stage with novelistic techniques, and when Beckett buries his actors in barrels and behind obsessive stage directions. The modernist theater thus owes much to the closet drama whose literary strategies it blends with a new mise en scne. While offering an alternative history of modernist theater and literature, Puchner also provides a new account of the contradictory forces within modernism.

Here's what you say about
Stage Fright - Martin Puchner.

Martin Puchner is a professor of English and comparative literature at Harvard University and author of The Drama of Ideas: Platonic Provocations in Theater and Philosophy.

In this superb examination of theatricality and its detractors, Martin Puchner takes a close look at the theories of Stphane Mallarm, James Joyce, Gertrude Stein, William Butler Yeats, Bertolt Brecht, and Samuel Beckett . . . In order to circumvent theatricality, Puchner observes, these authors shared common strategies: the superimposition of stage directions, choral figures, narratives, and commentators on the action, and characters who observe their own actions-all designed to disrupt mimesis, illusion, and theatrical virtuosity . . . [An] important study.

A breathtaking tour de force through different languages, genres, and millennia from Plato to the Wooster Group, Stage Fright opens up a theoretical path for the reintegration of theater studies into the German studies discourse . . . Puchner argues persuasively that theater plays a constitutive role in modernism and proposes theatricality as the divisive aesthetical moment in the opposition between modernism and the avant-garde . . . Puchner's book is original and exciting even in its asides and footnotes . . . an intellectual treat and a must-read for any scholar dealing with twentieth-century literature and culture.

After this study, a lot of polemic energy spent in debate between pro-theatricalists and anti-theatricalists, between adherents of modernism and those of the avant-garde, can be spared. The fault lines between solipsistic and elitist modernism on the one side, and a collaborative and political avant-garde on the other, must be drawn anew. As Puchner brilliantly demonstrates, the radical difference must be thought, first and foremost, along the parameters of anti-theatrical modernism versus the theatrical avant-garde . . . By doing justice to the minute details of . . . the dramas and theories of Mallarm, Joyce, Stein, Yeats, Brecht and Beckett, Puchner makes a compelling case for the central thesis of the book. Moreover, Puchner . . . provides a new vocabulary to analyze modernism's 'hate affair' with the theater.

Puchner's vigorous discussion . . . provides a new way to rethink drama's relationship both with the actual theatre and with its closeted literary counterparts . . . [and] offers a provocative remapping of the twentieth century's theatrical (and anti-theatrical) energies.

A provocative reassessment of modernism and the post-Wagnerian theater. Stage Fright is well written, clearly argued, and nicely organized, with a diction that is authoritative without being stuffy . . . Those interested in the history of the theater will find in Puchner's emphasis on the value and devaluing of theatricality a means of re-reading a century. Scholars of modernism may find this value and its articulation in Stage Fright equally useful for approaching other texts and genres.

Puchner's positioning of the Epic Theater in a larger, exhaustively and well-theorized context of modernist attempts to reconfigure the actor and create legible gestures by diegetic means certainly makes his book a major contribution to Brecht scholarship.

This book-with its thoughtful examination of difficult questions-is exceptionally smart and will usefully recalibrate discussions of modernism and modernist theatre.

A capital addition to the history of theater as well as an innovative theoretical approach rooted in literary history.

Philosophy as well as arts and drama collections will find this thought-provoking.