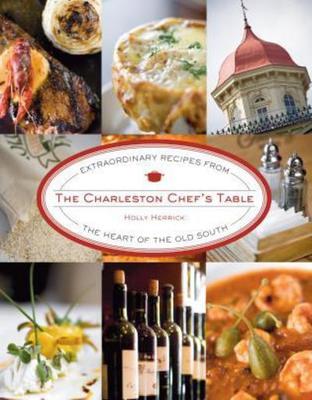 Signature recipes from greater Charleston's top restaurants
In recent years, Charleston, which hosts more than four million visitors annually, has matured into a world-class culinary destination. Now, The Charleston Chef's Table allows locals and visitors alike to take a bit of the city's incomparable flavor home, with profiles of more than sixty of the city's best restaurants and a signature recipe from each.
From roadside dives to upscale eateries, Southern to Chinese, Holly Herrick leaves no stone unturned as she winnows Charleston's 1,500 restaurants down to her top picks. From fried chicken to sauted duck livers, The Charleston Chef's Table delivers all the goods that make Charleston such an exciting place to visit, live, and dine. Complementing the text are full-color photographs, as well as sidebars that highlight this Southern gem's 300-year history.

Holly Herrick is a Cordon Bleu-trained chef, national award-winning food writer and restaurant critic, and longtime Charleston resident and booster. After stints in Paris, Minneapolis, and Jackson Hole, Wyoming, Herrick landed in Charleston, where she worked for seven years at The Post and Courier, Charleston's only daily newspaper, before leaving to focus on her freelance career in 2006. That same year she received a First Best Place Award for Newspaper Series, Special Sections, and Special Projects from the American Association of Food Journalists. Her work has appeared in Bon Appetit, Gourmet, Southern Living, and several regional publications. Her column, Delectable Delights, appears regularly in Lowcountry Living Magazine, and her first book, The Southern Farmers Market Cookbook, will be published in June 2009 by Gibbs Smith.

Charleston has needed a cookbook devoted to its great restaurants for a long time, and now we've got one - and it's a winner. Charleston Currents, December 17, 2009....this cookbook promises to be a good addition to any Charleston-lovers bookshelf, whether they cook or not.Charleston City Paper, December 16, 2009From cooklink.com:"Whether you happen to live in Charleston, SC, plan to visit it soon, or just like to know what's going on with Lowcountry cooking, you have to get a hold of Holly Herrick's book: The Charleston Chef's Table Cookbook - Extraordinary Recipes from the Heart of The Old South." From Charleston Magazine, January 2010:"Drawing upon a decade of experience as an area restaurant critic and a writer for publications like Gourmet and Southern Living, Herrick highlights more than 60 of her favorite eateries
and shares a signature recipe from each. "I chose places that serve delicious food consistently - places with dishes I crave," she says. Through Herrick's insider prose and Christopher Brown's vibrant photographs, readers can get the scoop on joints like Basil and Jack's Cosmig Dogs and try conjuring up Baked Brownies and Bowen's Island Frogmore Stew."From The Index Journal, Wed., Dec. 23, 2009 St. Claire Donaghy writes:"It's part cookbook, part restaurant guide and part coffee table book for those who love The Holy City of Charleston. 'The Charleston Chef's Table: Extraordinary Recipes from the Heart of the Old South' is an elegant, hard-bound book, loaded with tantalizing full-color photographs and recipes from more than 60 of Charleston's top restaurants...The 208-page book highlights everything from tea rooms to chic King Street restaurants serving up iconic she-crab soup to island taverns serving up buffalo fried shrimp and roadside hot dog places."......"The Charleston Chef's Table whets the appetite with recipes intended to inspire rather than intimidate. "I didn't want people to feel daunted by the recipes," herrick said, noting those chosen help to elevate even everyday ingredients into something more."Ochef.com writes:
"The Charleston Chef's Table profiles of more than sixty of the city's best restaurants and offers a signature recipe from each. From roadside dives to upscale eateries, Southern to Chinese, author Holly Herrick winnows Charleston's 1,500 restaurants down to her top picks. Complementing the text are full-color photographs, as well as sidebars that highlight this city's 300-year history." From The Florence Messenger, February 3, 2010By Libby Wiersema"A quick browse through the cookbook's pages, filled with Christopher Brown's gorgeous glossy photos of Charleston sights and dishes, reveals something unique. While Lowcountry influences are apparent throughout, there is a surprisingly distinctive array of ethnic and fusion offerings." From The Greenville News, March 10, 2010Passion for Charleston's food culture fuels cookbookBy Staff Writer Lillia-Penso"When Holly Herrick talks about Charleston, the food writer and formally trained chef slows the pace of her words, as if to allow listeners to savor every tiny morsel of her story. By the end of the conversation you feel oddly full, and in desperate need of a trip to Charleston - or at least a good bowl of She Crab soup."From JamesBeard.org "The Bookshelf," May, 2010By Anna Mowry "As we scanned the names and dishes that fill the pages of food writer and critic Holly Herrick's new cookbook, The Charleston Chef's Table, something struck us: the city of Charleston, where Herrick works and lives, boasts three back-to-back medals for Best Chef: Southeast, with Robert Stehling, Mike Lata, and Sean Brock winning in 2008, 2009, and 2010, respectively. If that streak doesn't convince you to hightail it to the Lowcountry culinary mecca, perhaps Herrick's book will: it profiles more than 60 of the city's restaurants, complete with beautiful photography, appealing regional recipes, and bits of local culinary history."From Pettprojects.com, August, 2010by Adrienne Petterson "More than sixty of the city's best restaurants are profiled in this book on Charleston's eateries.
Author/columnist and Cordon Bleu chef, Holly Herrick, who lives in Charleston, has put together this charmingly inviting book on the beautiful city and what it has to offer in the way of food and restaurants.
Herrick says, "Restaurants were chosen for inclusion based first and foremost on the high quality of the food they consistently deliver but also for their unique personalities".
Her book covers Starters; Salads; Soups; Sandwiches; Pasta; Seafood; Beef, Lamb, Pork, and More; Poultry Perch, and Just Desserts.
Along with a little story of each chosen restaurant, we're given one of their recipes and are invited to "feel free to make them just as the chefs do or to modify them and make them your own".