The continuing story of the International Space Station - Peter Bond 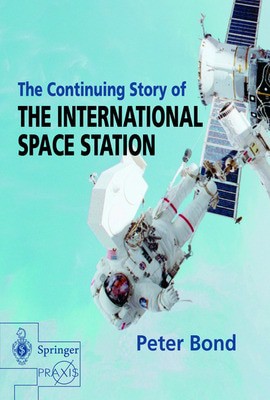 In this fascinating and well-written text Peter Bond describes the development and evolution of space stations. Particular emphasis is placed on the International Space Station, beginning with the revolution that began in 1970, when Salyut 1, the world's first space station was sent into orbit by the Soviet Union. Defeated in the race to the Moon, the Soviets redirected their efforts towards the conquest of near-Earth space. In the next three decades, their increasingly large and sophisticated structures rewrote the history books as cosmonauts continued to push back all space endurance records. In clear and concise language the book explains how the human exploitation of low-Earth orbit is about to change.

Here's what you say about
The continuing story of the International Space Station - Peter Bond.

"This book describes the development and evolution of the idea and concept of space stations with the chief emphasis on the International Space Station. … This is the story of a truly monumental project, from the dream to the reality and can be recommended as useful contribution to general space history." (Spaceflight, Vol. 45 (12), 2003)

"In his new book, Peter Bond takes the reader on an astonishing journey. … it portrays origin and development of the International Space Station. It is a story of both technological and intercultural achievement, turning the ISS into a challenging human outpost in space." (Science in Africa, October, 2002)

"This book begins with a description of the ISS at the end of 2001 and a view of how it will look on completion sometime after 2006 … . The book is illustrated throughout … . There are three appendices … and there are also lists of interesting web sites and books. This is an interesting and easy-to-read account of the ISS, the people involved with it, and the many problems it has faced and will face in the future." (Helen Close, Astronomy & Space, February, 2003)

"Now four years old, the International Space Station has yet to inspire much affection. … This extremely detailed yet readable reference book might cause people to think differently. With sheer accumulation of fact, Bond succeeds in spelling out the scale of achievement the … ISS really represents." (Sean Blair, Astronomy Now, January, 2003)

"'How can anyone make the endless saga of the International Space Station interesting?' However, Peter Bond has done a pretty good job of telling this … story. … this is a good history of a complex programme, well illustrated and quite readable. There are several appendices … . Adding these to more than 330 pages of text, a reading list, and a selection of web-sites, this is a useful addition to the space enthusiast's bookshelf." (John Davies, The Observatory, Vol. 122 (1172), 2003)

"Expecting a catalogue of cold facts, I was pleasantly surprised to find this book written with feeling and at times, an undercurrent of humour. It is structured chronologically, but more so by topic allowing the subject matter to flow naturally. … The book both supplies answers I have not been able to find previously and is a record of the ISS up to the beginning of 2002. I thoroughly recommend it." (R. W. Evans, Southern Stars, September, 2002)

"This book does an excellent job of looking back at the history of various space station projects, including the short-lived Skylab and the long-lived Mir, before detailing the science, politics, training and finance behind the current ISS. … the content carries it through, making it the definitive story of the ISS to date." (John Mather, Focus, August, 2002)