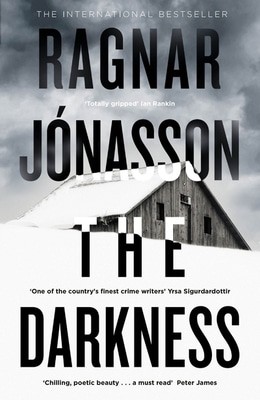 'Superb. . . chilling . . . This is the first volume in Jonasson's Hidden Iceland trilogy, which tells Hulda's story in reverse chronological order and establishes her as one of the great tragic heroines of contemporary detective fiction' Sunday Times Crime Book of the Month

'Ragnar Jnasson writes with a chilling, poetic beauty - a must-read addition to the growing canon of Iceland Noir' Peter James, The Number One bestselling author of Love You Dead

'Crime fiction has never seen a character quite like Hulda Hermannsdittir; nor a series launch so entirely willing to take risks and obliterate long-standing tropes . . . There is no doubt that The Darkness will rank as one of the most popular and powerful reading experiences of the year' Bolo Books Review

**Be the first to read the incredible, chilling first novel in the new Hulda crime series from Icelandic superstar Ragnar Jnasson by pre-ordering your copy now**

The body of a young Russian woman washes up on an Icelandic shore. After a cursory investigation, the death is declared a suicide and the case is quietly closed.

Over a year later Detective Inspector Hulda Hermannsdttir of the Reykjavk police is forced into early retirement. She dreads the loneliness, and the memories of her dark past that threaten to come back to haunt her. But before she leaves she is given two weeks to solve a single cold case of her choice.

She knows which one: the Russian woman whose hope for asylum ended on the dark, cold shore of an unfamiliar country. Soon Hulda discovers that another young woman vanished at the same time, and that no one is telling her the whole story. Even her colleagues in the police seem determined to put the brakes on her investigation. Meanwhile the clock is ticking.

Hulda will find the killer, even if it means putting her own life in danger.

Spanning the icy streets of Reykjavik, the Icelandic highlands and cold, isolated fjords, The Darkness is an atmospheric thriller fromone of the most exciting names in Nordic Noir.

'Seductive . . . an old-fashioned murder mystery with a strong central character and the fascinating background of a small Icelandic town cut off by snow. Ragnar does claustrophobia beautifully' Ann Cleeves

'A modern take on Agatha Christie-style mystery, as twisty as any slalom . . .' Ian Rankin on Snowblind

'Jnasson's books have breathed new life into Nordic noir . . . all the skilful plotting of an old-fashioned whodunit although it feels bitingly contemporary in setting and tone' Sunday Express

'Out of all of Ragnar's books, this is the one I like the most . . . The book of his which reminds me most of Agatha Christie' Kiljan on The Island

Here's what you say about
The darkness - Ragnar Jnasson.

Ragnar Jnasson was born in Reykjavk, Iceland, where he works as a writer and a lawyer and teaches copyright law at Reykjavk University. He has previously worked on radio and television, including as a TV news reporter for the Icelandic National Broadcasting Service, and, from the age of seventeen has translated fourteen of Agatha Christie's novels. He is an international Number One bestseller.

An intelligent, provocative whodunit with a killer twist
Ian Rankin

Icelandic detective Hulda Hermannsdottir is the best tragic heroine our reviewer has read for years
The Times, Must Read List

A complex, fascinating mix of Icelandic community and alienation, atmospheric tension, and timely issues (immigrant exploitation and vigilante justice), Jonasson's latest series is another must-read for crime fans who follow the work of Arnaldur Indridason and Yrsa Sigurdardottir
Booklist

I've ONLY recently discovered the extraordinary Icelandic writer who adds several shades of darkness to Nordic noir . . . it builds to a deeply shocking climax
Daily Mail, Ten Thrillers to Die For - Anthony Horowitz

If you have ever doubted the appropriateness of the phrase 'Nordic noir', The Darkness will dispel any hesitation . . . in what way this happens (and how badly) is the strength of the book. There are ever-darker surprises, culminating in a finish that leaves one with a highly disturbing image.
The Press - BOOK OF THE WEEK

The wait was worthwhile and The Darkness first in the new trilogy, is a very efficient piece of work. Jonasson has the full measure of the Nordic noir genre, and pushes all the requisite buttons
Barry Forshaw, Financial Times

To read Ragnar Jonasson is to plunge into snowy Iceland . . .
much of its atmosphere and subtle pacing to the traditional 'golden age' detective fiction as the mystery unfolds and builds to a startling climax, elegantly handled.
The Witness

Superb . . . Chilling . . . and establishes her as a great tragic heroine of modern detective fiction
Crime Book of the Month, Sunday Times - Joan Smith

Outstanding series debut . . . builds to its stunning conclusion, one of the more remarkable in recent crime fiction
Publishers Weekly

It's shockingly sinister and has an ending that will leave you, literally, gasping for breath
Crimesquad

The ending really took my breath away and that's hard for writers to do to me these days . . . It was a complete surprise and I should have seen it coming and I didn't. [Hulda] is a fantastic, complex 3D character and I want to see more of her, so hurray, this is the first of a three book series
Ian Rankin on the Simon Mayo Podcast

The Darkness will have you burning the midnight oil till 2:00am. It's a gloriously compelling yarn, whose spell continues to hold even when you've turned its final page thanks to its unexpected ending. I can't wait for his next
Reader review

Expertly plotted, with an ending that's a true shocker, The Darkness is the first book in a trilogy
featuring this engaging investigator, which is good news
Book of the Month, Guardian

Was gripped from the start of this brilliantly told story. And left wide-eyed with shock at the ending
Fiona Barton, bestselling author of The Widow

A true masterpiece . . . a plot full of twists and turns and an ending that leaves you gasping for air
Yrsa Sigurardttir

As chilling as the nip in the Icelandic air
Choice Magazine

Crime fiction has never seen a character quite like Hulda Hermannsdittir; nor a series launch so entirely willing to take risks and obliterate long-standing tropes . . . There is no doubt that The Darkness will rank as one of the most popular and powerful reading experiences of the year
Bolo Books Review