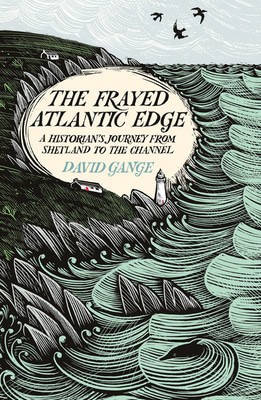 'This is the book that has been wanting to be written for decades: the ragged fringe of Britain as a laboratory for the human spirit' Adam Nicolson

Over the course of a year, leading historian and nature writer David Gange kayaked the weather-ravaged coasts of Atlantic Britain and Ireland from north to south: every cove, sound, inlet, island.

The idea was to travel slowly and close to the water: in touch with both the natural world and the histories of communities on Atlantic coastlines. The story of his journey is one of staggering adventure, range and beauty. For too long, Gange argues, the significance of coasts has been underestimated, and the potential of small boats as tools to make sense of these histories rarely explored. This book seeks to put that imbalance right.

Paddling alone in sun and storms, among dozens of whales and countless seabirds, Gange and his kayak travelled through a Shetland summer, Scottish winter and Irish spring before reaching Wales and Cornwall. Sitting low in the water, as did millions in eras when coasts were the main arteries of trade and communication, Gange describes, in captivating prose and loving detail, the experiences of kayaking, coastal living and historical discovery.

Drawing on the archives of islands and coastal towns, as well as their vast poetic literatures in many languages, he shows that the neglected histories of these stunning regions are of real importance in understanding both the past and future of the whole archipelago. It is a history of Britain and Ireland like no other.

Here's what you say about
The frayed Atlantic edge - David Gange.

Born in the Peak District, David Gange is Senior Lecturer in History at the University of Birmingham and has published history books with Oxford University Press, Cambridge University Press and Oneworld Publications. He has appeared on BBC2 and Smithsonian television as well as in the TLS and Big Issue. His work also includes nature writing and photography in various books and magazines, and he has held visiting fellowships in Brazil and Japan as well as at the National University of Ireland, Galway.

SHORTLISTED FOR THE WAINWRIGHT PRIZE 2020

'An impressive intellectual and physical journey, allowing the reader to experience the Atlantic Coast from a fresh, deeply informed and invigorating perspective; rarely have our coastlines andcultures been explored with such understanding and respect.' Highland Book Prize

'This book is the product of a considerable physical achievement … A brilliant book, and a major step towards a genuinely radical reimagining of the history of the British Isles.' Scotsman

'The strength of Mr Gange's account is his generosity. His own wry persona never overshadows the voices of past and present inhabitants … [his] prose is itself poetic and precise … His enthusiasm for snoozing in soggy sleeping bags is infectious … A dunking in the freezing sea, off the coast of County Mayo, leaves the author shivering but "ignited, elated". Surfacing from the book, the reader is invigorated, too.' Economist

'Gange is both extraordinarily intrepid and deeply attentive to all he encounters … worth attention for its deeper argument as well as its thrilling surface.' Spectator

'[Gange is] physically resourceful, articulate, clear-eyed, informed, attentive to the realities, and crucially at home in all the elements.A book reliant in the end on one key fact: edges are revelatory.' Adam Nicolson, winner of the Wainwright Prize 2018

'This beautifully written and grippingly researched book shows us that our shores are the beginning, not the ending, of things.' Philip Hoare