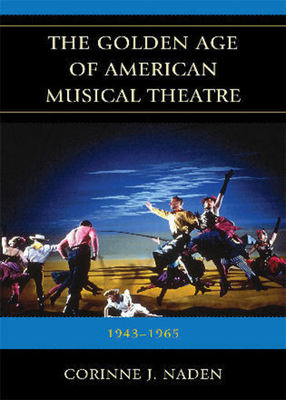 The Golden Age of American Musical Theatre: 1943-1965 provides synopses, cast and production credits, song titles, and other pertinent information for over 180 musicals from Oklahoma! to On A Clear Day You Can See Forever. Concentrating on a 22-year span, this book lists both commercial successes and flops of the Golden Age-when the musicals presented on Broadway showcased timeless, memorable tunes, sophisticated comedy, and the genius of creative artists like Richard Rodgers, Oscar Hammerstein, Jerome Robbins, Leonard Bernstein, George Abbott, Moss Hart, Angela Lansbury, Robert Preston, and many others.
After an introduction and an overview of the history of Broadway, Naden offers a chronological timeline of the Golden Age musicals in America. She then presents details, in succeeding chapters, about the shows, the stars (on and off stage), the theatres, and the awards, beginning with an alphabetical listing of shows. Each show entry supplies the title, opening date, theatre, number of performances, primary cast and crew, and a plot synopsis, as well as other interesting data about the show, such as the awards won. Additional details about well-known actors, singers, composers, lyricists, directors, and choreographers of the period are provided, including birth and death dates, birth cities, born names, a brief biography, and award nominations and wins. Finishing with a bibliography and an index, this book is beneficial to anyone wanting to know more about one of the richest periods in Broadway history.

The Golden Age of American Musical Theatre offers a snapshot of an important period in musical-theater history. After lean times on Broadway in the 1930s, the 1943 production of Oklahoma!, by Richard Rodgers and Oscar Hammerstein, ushered in a phase on Broadway now known as the "Golden Age." Highlighted by great shows, costumes, and stars, this period brought Broadway back to life. From mid-1940 until 1965, at least one hit musical was produced almost every year....The largest section of the volume features alphabetical show-by-show descriptions in which author Naden offers basic information about every production: dates, numbers of shows in runs, theater names, casts and creators, synopses, prominent songs, awards, and a designation for "flops," or shows with fewer than 162 performances....Rounding out the volume are chapters featuring short biographies of stars and creators from the period, histories and descriptions of each Broadway theater, information about the awards associated with Broadway, a list of individual songs with their corresponding musicals, and a year-by-year time line of the shows produced from 1943 through 1965. This title will likely be shelved among numerous similar works about Broadway, but its specific focus will appeal to readers and researchers interested in this particular period.
Booklist

Naden, known primarily for her children's books, here surveys the Golden Age of musical theater, but breaks no new ground. Following a short historical overview, the book catalogs 180 musicals of the period, with each entry listing opening night data, length of run, production credits, original cast and character names, plot synopses (one paragraph each), song lists, and Tony Awards and nominations, along with one-sentence comments. Most of this information can be gleaned from standard theater reference books and the Internet Broadway Database http://www.ibdb.com/ (CH, Jul'06, 43-6440). Naden also includes single-paragraph biographies of Broadway notables, brief entries on Golden Age theaters and awards, and a list of songs and their associated musicals. For a quick guide to Golden Age information, Naden will do, but researchers must also refer to Gerald Bordman and Richard Norton's American Musical Theatre (4th ed., 2010), Thomas Hischak's Broadway Plays and Musicals (CH, Jun'10, 47-5378), Stanley Green and Kay Green's Broadway Musicals Show by Show (6th ed., 2008), and Ethan Mordden's somewhat jaundiced but fun Coming Up Roses: The Broadway Musical in the 1950s (1998). Summing Up: Recommended. Comprehensive musical theater collections; general readers.
CHOICE

Enthusiasts of music theater are beneficiaries of [Naden's] skills both as storyteller and researcher.... The Golden Age of American Musical Theatre is recommended for libraries and institutions; those who frequently teach and perform this repertoire should consider adding it to their holdings as well.
Journal of Singing