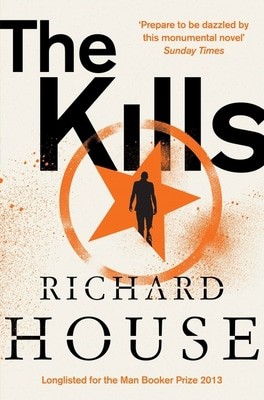 Longlisted for the Man Booker Prize 2013.

This is The Kills: Sutler, The Massive, The Kill, The Hit.

The Kills is an epic novel of crime and conspiracy told in four books.

It begins with a man on the run and ends with a burned body.

Moving across continents, characters and genres, there will be no more ambitious or exciting novel in 2013.

In a ground-breaking collaboration between author and publisher, Richard House has also created multimedia content that takes you beyond the boundaries of the book and into the characters' lives outside its pages. This material and much more can be found on http://www.thekills.co.uk.

Camp Liberty is an unmanned staging-post in Amrah province, Iraq; the place where the detritus of the war is buried, incinerated, removed from memory. Until, suddenly, plans are announced to transform it into the largest military base in the country, codenamed the Massive, with a post-war strategy to convert the site for civilian use.

Contracted by HOSCO, the insidious company responsible for overseeing the Massive, Rem Gunnerson finds himself unwittingly commanding a disparate group of economic mercenaries at Camp Liberty when the mysterious Stephen Lawrence Sutler arrives. As the men are played against each other by HOSCO the situation grows increasingly tense. And then everything changes. An explosion. An attack on a regional government office. When the dust settles it emerges that Sutler has disappeared, and over fifty million dollars of reconstruction funds are missing.

Sutler finds himself accused and on the run. Gunnerson and his men want revenge for months of abuse and misinformation. Out of the chaos a man named Paul Geezler rises to restore order, a man more involved than he's willing to admit.

And then there's the vicious murder of an American student in Italy. A murder that replicates exactly the details of a well-known novel.

Here's what you say about
The kills - Richard House.

Richard House is an author, film maker, artist and university lecturer. As well as the digital-first novel The Kills, he has written two previous novels (Bruiser and Uninvited), which were published by Serpent's Tail in the 1990s. He is a member of the Chicago-based collaborative Haha. He is the editor of a digital magazine, Fatboy Review: www.fatboyreview.net

'Richard House has written a damn good book . . .The Kills is possibly the most eyebrow-raising entry on this year's Booker longlist . . . he is not your average novelist, but is also a film-maker, artist and magazine editor . . . If this all seems hifalutin, rest assured: The Kills is still all about spinning a good yarn' Sunday Times, Culture

'For all its bulk The Kills proves easily digestible . . . it is well worth ejecting five or six conventional thrillers from your holiday luggage and devoting yourself to The Kills for a few days. Like all the best thrillers, it takes you on a hell of a ride' Daily Telegraph

'Prepare to be dazzled by this monumental novel . . . a true achievement. House's sea of words relentlessly interrogates his themes through action and dialogue, leaving his reader washed up on a faraway shore, dazed yet exhilarated' Sunday Times

'Richard House's Man Booker-longlisted novel stands out from the pile . . . an ambitious and complex meta-thriller that spins its many stories like plates, tantalising you at every turn . . . a page turner . . . and a book absolutely to be read twice over.' Independent

'If you have a week-long, do-nothing holiday planned, or you have to spend some time convalescing in hospital, or you are going to prison, then Richard House's monumental, Man Booker-longlisted thriller may be the ideal accompaniment. The Kills is a dense and twisty series of linked stories that range across Europe, America and the Middle East . . . engrossing but also ferociously complex and demanding . . . [House] has a lovely turn of phrase . . . he writes in startling detail about character, location and physical mannerisms . . . a very sophisticated yarn-spinner'
Evening Standard

'A hot favourite on the Booker longlist . . . This is a staggering achievement . . . Highly recommended' Daily Mail

'Richard House has written a gripping, hallucinogenic - and enormous - novel that deals with the aftermath of the Iraq conflict . . . The [enhanced] digital edition is far and away the better way to read this novel; the first two books in particular are augmented by a series of short films embedded on the page, often with text overlaid, as well as animations and audio clips. For example, listening to the phone messages left by one character's mother as she tries to cajole him into contacting her, before she understands that he is in danger, adds an emotional jolt to the text. Throughout, the simple yet elegant enhancements work to take us beyond the page, adding depth and texture to the story. This is the first time I've read a digital edition of a primarily text-based novel where I've thought: yes, this works . . . House's writing is spare and compelling, and the digital edition is truly enriched by the additional media' Guardian

'They [the Man Booker 2013 judges] outdo themselves in choosing an astounding sequence by Richard House in The Kills, four consecutive novels amounting to 300,000 words or more. This is a thrilling, overwhelming ride, starting from a brilliant North by North-West-ish donne: an official working in the Gulf under a false name on a questionable project is asked to disappear quietly for a couple of hundred thousand and quickly finds himself the fall-guy for a missing $53 million. Astonishing for its scale and drive, it is released in a number of digital formats as well as an immense hardback. It is full of lucid action, drifting contemplation, apparent dead-ends, confusion and thuggish explosions. I could not wait to get back to it when reading it, and House is probably this year's major reinventor of the possibilities of the genre: the leap into the present tense at the three-quarter stage shows a novelist in full command of his technical possibilities . . . one you ought to read' Philip Hensher, Spectator

'Thrilling . . . explores the multimedia possibilities of the modern book' Metro

A gigantic experiment, bracing, thrilling and worthy of a medal for narrative heroism, Richard House's four-volume The Kills plays an epic set of variations on the shadow war for loot and influence behind the chaos of Iraq.
Independent - Boyd Tonkin, Books of the Year

The novel I enjoyed most was Richard House's sensational pile-driver, The Kills.
Guardian - Philip Hensher, Books of the Year