The last of her kind - Sigrid Nunez 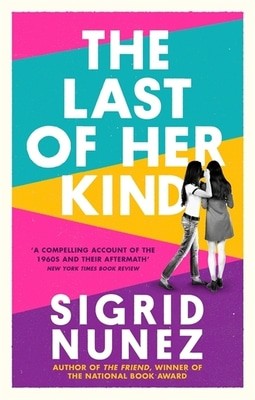 It is Columbia University, 1968. Ann Drayton and Georgette George meet as roommates on the first night. Ann is rich and radical; Georgette is leery and introverted, a child of the very poverty and strife her new friend finds so noble. The two are drawn together by their differences; two years later, after a violent fight, they part ways. When, in 1976, Ann is convicted of killing a New York cop, Georgette comes back to their shared history in search of an explanation. She finds a riddle of a life, shaped by influences more sinister and complex than any of the writ-large sixties movements. She realises, too, how much their early encounter has determined her own path and why, after all this time, as she tells us, 'I have never stopped thinking about her'.

'A subtle and profoundly moving novel about friendship, romantic idealism and shame' O, The Oprah Magazine
'An unflinching examination of justice, race and political idealism that brings to mind Philip Roth's American Pastoral and the tenacious intelligence of Nadine Gordimer' New York Times

Here's what you say about
The last of her kind - Sigrid Nunez.

Sigrid Nunez has published seven novels, including A Feather on the Breath of God, The Last of Her Kind, Salvation City, and, most recently, The Friend, which won the National Book Award 2018. She is also the author of Sempre Susan: A Memoir of Susan Sontag. Among the journals to which she has contributed are The New York Times, The Wall Street Journal, The Paris Review, Threepenny Review, Harper's, McSweeney's, Tin House, The Believer and newyorker.com. Her work has also appeared in several anthologies, including four Pushcart Prize volumes and four anthologies of Asian-American literature.


Sigrid's honors and awards include a Whiting Writer's Award, a Berlin Prize Fellowship, and two awards from the American Academy of Arts and Letters: the Rosenthal Foundation Award and the Rome Prize in Literature. The Friend won the 2018 National Book Award. She has taught at Columbia, Princeton, Boston University, and the New School, and has been a visiting writer or writer in residence at Amherst, Smith, Baruch, Vassar, and the University of California, Irvine, among others. In spring, 2019, she will be visiting writer at Syracuse University. Sigrid has also been on the faculty of the Bread Loaf Writers' Conference and of several other writers' conferences across the country. She lives in New York City.

A passionate honesty grips the heart of The Last of Her Kind ... A subtle and profoundly moving novel about friendship, romantic idealism and shame
O, The Oprah Magazine

An unflinching examination of justice, race and political idealism that brings to mind Philip Roth's American Pastoral and the tenacious intelligence of Nadine Gordimer

Nunez ably and effectively evokes the political and social atmosphere of the times . . . Nunez takes a jeweller's eyepiece to racial and sexual politics, to the lasting impact of male violence and to the painful fragility of family bonds . . . an enormously absorbing novel with real heart to it, and a vivid recreation of a seismic and lastingly influential time
Observer - Alex Clark

Sigrid Nunez teaches an honors-level survey course in the sexual, political, and cultural movements that shaped the thinking (and rocked the world) of so many boomer women. Nunez's voice is unflinching and intimate, her novelistic structure as invitingly informal as jottings in a journal

A compelling account of the 1960s and their aftermath, a carefully written and discerning narrative with closely drawn portraits of two prototypical yet unique women trying to construct a friendship across an unbridgeable class divide
New York Times Book Review

A powerful and acute social novel, perhaps the finest yet written about that peculiar generation of young Americans who believed their destiny was to shape history.
Salon.com

This is a novel about idealism and also about race relations, class, madness, rock music, and the true nature of love. It's a tribute to the skill and sensitivity of author Sigrid Nunez that The Last of Her Kind has something revelatory to say about each of these subjects. Decades from now, historians would do well to consult this book to get a true sense of how the upheavals of the late 1960s reverberated through the lives of young Americans from one who experienced this social earthquake firsthand
Baltimore Sun