The Midwife of Venice - Roberta Rich 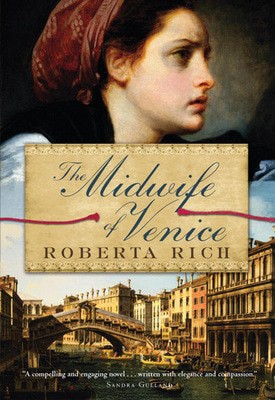 At midnight, the dogs, cats, and rats rule Venice. The Ponte di Ghetto Nuovo, the bridge that leads to the ghetto, trembles under the weight of sacks of rotting vegetables, rancid fat, and vermin. Shapeless matter, perhaps animal, floats to the surface of Rio di San Girolamo and hovers on its greasy waters. Through the mist rising from the canal the cries and grunts of foraging pigs echo. Seeping refuse on the streets renders the pavement slick and the walking treacherous.

It was on such a night that the men came for Hannah.

Hannah Levi is known throughout sixteenth-century Venice for her skill in midwifery. When a Christian count appears at Hannah's door in the Jewish ghetto imploring her to attend his labouring wife, who is nearing death, Hannah is forced to make a dangerous decision. Not only is it illegal for Jews to render medical treatment to Christians, it's also punishable by torture and death. Moreover, as her Rabbi angrily points out, if the mother or child should die, the entire ghetto population will be in peril.

But Hannah's compassion for another woman's misery overrides her concern for self-preservation. The Rabbi once forced her to withhold care from her shunned sister, Jessica, with terrible consequences. Hannah cannot turn away from a labouring woman again. Moreover, she cannot turn down the enormous fee offered by the Conte. Despite the Rabbi's protests, she knows that this money can release her husband, Isaac, a merchant who was recently taken captive on Malta as a slave. There is nothing Hannah wants more than to see the handsome face of the loving man who married her despite her lack of dowry, and who continues to love her despite her barrenness. She must save Isaac.

Meanwhile, far away in Malta, Isaac is worried about Hannah's safety, having heard tales of the terrifying plague ravaging Venice. But his own life is in terrible danger. He is auctioned as a slave to the head of the local convent, Sister Assunta, who is bent on converting him to Christianity. When he won't give up his faith, he's traded to the brutish lout Joseph, who is renowned for working his slaves to death. Isaac soon learns that Joseph is heartsick over a local beauty who won't give him the time of day. Isaac uses his gifts of literacy and a poetic imagination-not to mention long-pent-up desire-to earn his day-to-day survival by penning love letters on behalf of his captor and a paying illiterate public.

Back in Venice, Hannah packs her ""birthing spoons"-secret rudimentary forceps she invented to help with difficult births-and sets off with the Conte and his treacherous brother. Can she save the mother? Can she save the baby, on whose tiny shoulders the Conte's legacy rests? And can she also save herself, and Isaac, and their own hopes for a future, without endangering the lives of everyone in the ghetto?

The Midwife of Venice is a gripping historical page-turner, enthralling readers with its suspenseful action and vivid depiction of life in sixteenth-century Venice. Roberta Rich has created a wonderful heroine in Hannah Levi, a lioness who will fight for the survival of the man she loves, and the women and babies she is duty-bound to protect, carrying with her the best of humanity's compassion and courage.

Here's what you say about
The Midwife of Venice - Roberta Rich.

Born in Buffalo, New York, Roberta Rich was until recently a lawyer practicing family law. She has also been a student, waitress, nurses' aide, hospital admitting clerk, and factory assembly line worker. She currently divides her time between Vancouver, B.C. and Colima, Mexico. She is married and has one daughter, three step-children, a German Shepherd, tropical fish and many oversexed parakeets. The Midwife of Venice marks her debut as a novelist.

"Much of the history of women is written in water," says Rich of the impetus to create a literary heroine based on the history of the Jews in Venice, after touring the Venice ghetto on holiday. "Their accomplishments disappear as smoothly as a stone thrown in a pond. The creations of women are transitory - meals cooked, clothes mended, clothes washed, clothes sold (for one of the few professions Jews were permitted at the time was trade in second hand clothing), children born, children birthed, and children raised. After that trip, I started to read all I could find on the subject of daily life in the ghetto. There is precious little. And precious little about the daily lives of women in particular and how they gave birth. This book is a way to imagine a way into all that invisible history."

"A lively tale involving love, blackmail, family, murder, plague, intercultural compassion, dramatic last-minute rescues and some very creative disguises.... Rich capably depicts the strength of women and the precariousness of their lives, regardless of status or religion."
-The Globe and Mail

"Enticing.... An adventure filled with love, intrigue, murder and unbreakable loyalty in a renaissance city where exotic perfumes and foul odours almost seem to waft off the page."
-Toronto Star

"A compelling and engaging novel, a well-researched high-stakes drama written with elegance and compassion: fascinating!"
- Sandra Gulland, author of TheJosephine B. Trilogy and Mistress of the Sun

"Not only did Roberta Rich transport me to sixteenth-century Venice, with itsseductive tapestry of smells, sights, textures and beliefs, she involved me ina poignant story of seasoned love. I don't know which I admired more - the wonderfully realized settingor thesuspenseful story of Hannah and Isaac."
-Katherine Ashenburg, author of The Dirt on Clean

"A suspenseful tale.... The book is obviously well researched, and its descriptions of Venice and Malta are both fascinating and realistic."
- Vancouver Sun

"Rich successfully captures the seedy side of 16th-century Venice-the Jewish ghetto, the plague, the confluence of religious and legal authority."
-Publishers Weekly

"Entertainingly suspenseful.... [A] moving melodrama of steadfast love against all odds. In a series of cliff-hanging chapters, Hannah transforms from a "timid little ghetto mouse" into a resourceful young woman as she seeks to save her husband and an innocent child.... Rich's fascinating historical details and her warm empathy for her protagonists will capture historical fiction fans and readers who enjoyed Anita Diamant's The Red Tent."
-Library Journal

Rich skillfully incorporates a wealth of historical detail into her riveting tale of a heroine who won't give up on her marriage."
-Chicago Tribune