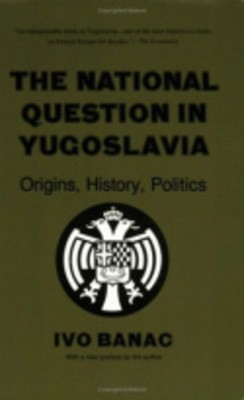 Even before it collapsed into civil war, ethnic cleansing, and dissolution, Yugoslavia was an archetypical example of a troubled multinational mosaic, a state without a single national base or even a majority. Its stability and very existence were challenged repeatedly by the tension between the pressures for overarching political cohesion and the defense of separate national identities and aspirations.

In a brilliant analysis of this complex and sensitive national question, Ivo Banac provides a comprehensive introduction to Yugoslav political history. His book is a genetic study of the ideas, circumstances, and events that shaped the pattern of relations among the nationalities of Yugoslavia. It traces and analyzes the history and characteristics of South Slavic national ideologies, connects these trends with Yugoslavia's flawed unification in 1918, and ends with the fatal adoption of the centralist system in 1921.

Banac focuses on the first two and a half years in the history of the Kingdom of the Serbs, Croats, and Slovenes, because in his view this was the period that set the pattern for subsequent development of the national question. The issues that divided the South Slavs, and that still divide them today, took on definite form during that time, he maintains.

Banac provides extensive treatment of all of Yugoslavia's nationalities; his sections on the Montenegrins, Albanians, Macedonians, and Bosnian Muslims are unique in the literature. In this unbiased account, all of the principals and groups assume a tragic fascination.

When published in 1984, The National Question in Yugoslavia was the first complete introduction to the cultural history of the South Slavic peoples and to the politics of Yugoslavia, and it remains a major contribution to the scholarship on modern European nationalism and the stability of multinational states.

Here's what you say about
The national question in Yugoslavia - Ivo Banac.

Ivo Banac is Professor of History and Master of Pierson College, Yale University.

"Ivo Banac has written the most comprehensive, judicious, and objective account of the origins, development, and politics of the Yugoslav national question up to the aftermath of World War I that exists in any language. What especially enhances the value of this account is not only the author's thorough grasp of the political intricacies of his subject but his erudite command of the cultural factors."

"Anyone interested in contemporary Yugoslavia must read this excellent volume because no other book in any language sets forth the issues in such stark and realistic terms. Unlike many other books on the South Slav nationality problem, which analyze it more from the perspective of the Serbs, Banac seeks to restore the balance by looking at the problems through the eyes of the other South Slavs, in particular the Croats, and this is the great strength of the volume. Banac's outstanding book tells the story with great clarity and deep understanding and appreciation for South Slavic affairs."

"Ivo Banac's study of the origins of the national question in Yugoslavia provides the substantive content necessary to return to Yugoslav experience and to identify the national differences that are being 'accommodated' by current political reform. It is also an excellent starting point for those who want to study actual cultures of rule in contemporary Yugoslavia."

"An indispensable book on Yugoslavia and one of the most impressive works on Eastern Europe for decades."

"The greatest strength of Banac's book is the thoroughness and accuracy with which he recounts the historical background, personal factors, and ideological structures within which Yugoslav politicians worked. Along with its other virtues, the book is a pleasure to read. Banac has flair. In scope, detail, and presentation, this book finds few equals in the literature of Southeast Europe. It is simply one of the finest studies of the region that Western scholarship has produced."

"Banac's history of the peoples of Yugoslavia is comprehensive, detached, and well timed. Banac begins his inquiry with an examination of the terminology of nation, nationhood, and nationality, which then proceeds to apply to the South Slavs, drawing a distinction between the national identity of the Serbs, Croats, and Bulgars, which was acquired before the development of modern nationalism, and that of the Slovenes, Montenegrins, Macedonians, and Muslims from Bosnia-Hercegovina, whose national consciousness developed only in the nineteenth century."