The quality of mercy - Peter Brook 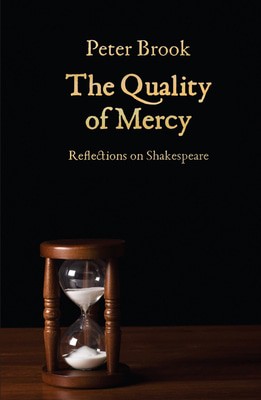 In The Quality of Mercy, one of the world's most revered theatre directors reflects on a fascinating variety of Shakespearean topics.

In this sequence of essays, Peter Brook debates such questions as who was the man who wrote Shakespeare's plays, why Shakespeare is never out of date, and how actors should approach Shakespeare's verse. He also revisits some of the plays which he has directed with notable brilliance, such as King Lear, Titus Andronicus and, of course, A Midsummer Night's Dream.

Taken as a whole, this short but immensely wise book offers an illuminating and provocative insight into a great director's relationship with our greatest playwright.

'An invaluable gift from the greatest Shakespeare director of our time... Brook's genius, modesty, and brilliance shine through on every page' James Shapiro, author of 1599: A Year in the Life of William Shakespeare

Here's what you say about
The quality of mercy - Peter Brook.

Peter Brook is one of the world's best-known theatre directors. Outstanding in a career full of remarkable achievements are his productions of Titus Andronicus (1955) with Laurence Olivier, King Lear (1962) with Paul Scofield, and The Marat/Sade (1964) and A Midsummer Night's Dream (1970), both for the Royal Shakespeare Company.

Since moving to Paris and establishing the International Centre for Theatre Research in 1970 and the International Centre for Theatre Creation when he opened the Bouffes du Nord in 1974, he has produced a series of events which push at the boundaries of theatre, such as Conference of the Birds (1976), The Ik (1975), The Mahabharata (1985) and The Tragedy of Carmen (1981) to name but a few.

'Should be required reading for any aspiring young directors and actors but also all serious theatregoers... the writing is a model of clarity, the ideas challenging but sensible... it should be on every reader's bookshelf'

'Each new page you turn is a delight. And all written in such an unpretentious, gentle, often amusing style. A joy'

'This volume positively seethes and sparkles with ideas... provides not only acute insights into the texts, but intriguing details of performance history, and a few morsels of grand theatrical gossip'

'Exquisite... enthralling... This short, modest and brilliant book does more than many more grandiose tomes to renew the reader's fascination with the plays, and the theatre-goer's wonder at the extraordinary and diverse sensations locked up inside the First Folio. It should be required reading at all universities and drama clubs.'

'If you want a gift for an actor, look no further than this educative, engrossing, entertaining book'

'Contains within its scintillating reflections the essence of all that Peter Brook has learned over a lifetime. Whoever imagined that a book about Shakespeare could also be such fun?'