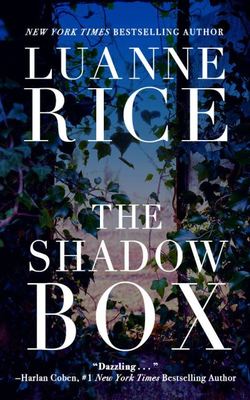 The Amazon Charts bestselling author of Last Day delivers a haunting thriller about how far one wife is willing to go to expose the truth-and the lengths someone will go to stop her.

After artist Claire Beaudry Chase is attacked and left for dead in her home on the Connecticut coast, she doesn't know who she can trust. But her well-connected husband, Griffin-who is running for governor-is her prime suspect.

Just before the attack, Claire was preparing for an exhibit of her shadow boxes, one of which clearly accuses Griffin of a violent crime committed twenty-five years ago. If the public were to find out who her husband is, his political career would be over. Claire's certain her husband and his powerful supporters would kill her to stop the truth from getting out.

When one of Claire's acquaintances is murdered, the authorities suspect the homicide is linked to the attack on Claire. As the dual investigations unfold, Claire must decide how much she's willing to lose to take down her husband and the corrupt group of elites who will do anything to protect Griffin's interests and their own.

Here's what you say about
The shadow box - Luanne Rice.

Luanne Rice is the New York Times bestselling author of thirty-five novels that have been translated into twenty-four languages. In 2002, Connecticut College awarded Rice an honorary degree, and she also received an honorary doctorate from the University of Saint Joseph. In June 2014, she received the 2014 Connecticut Governor's Arts Award for excellence as a literary artist.

Several of Rice's novels have been adapted for television, including Crazy in Love, for TNT; Blue Moon, for CBS; Follow the Stars Home and Silver Bells, for the Hallmark Hall of Fame; and Beach Girls, for Lifetime.

Rice is a creative affiliate of the Safina Center, an organization that brings together scientists, artists, and writers to inspire a deeper connection with nature—especially the sea. Rice is an avid environmentalist and advocate for families affected by domestic violence. She lives on the Connecticut Shoreline.

"[A] gripping psychological thriller…Prepare to be up all night reading." -Publishers Weekly

"Decades-old crimes lead to current murder in a case unwound through the efforts of strong women. With a core of appealing characters, bestselling author Rice-known for domestic fiction and romance-has the makings of a promising mystery series here." -Booklist

"The Shadow Box is a heart-stopping yet enthralling breath of sea air, with as much dark beauty as one of Claire Beaudry Chase's own shadow boxes. It's also a resolute testimonial of inner strength, no matter how far from our plots and plans life takes us." -The Big Thrill

"The Shadow Box is a captivating read as much for its illuminating portrayal of domestic disenchantment as for its requisite, and robustly handled, mystery elements. Ultimately, Luanne Rice has given us a deeply affecting meditation on how we both lose and find ourselves, proving once again that she's a luminary in any, and all, literary realms of her choosing." -Criminal Element

"The Shadow Box is Luanne Rice at her dazzling best. Filled with dark family secrets and wells of deep emotion, this novel will stick with you long after you've finished reading." -Harlen Coben, #1 New York Times bestselling author of Run Away

"As always, Luanne Rice gives us characters so real they feel like family and families so flawed they give us chills. Shocking, compassionate, and told with the unerring eye of a true and gifted observer, The Shadow Box will keep you turning the pages long past your bedtime." -Tami Hoag, #1 New York Times bestselling author of The Boy

"A clever protagonist in extreme danger pitted against a cruel and powerful circle made the stakes in The Shadow Box so high I could barely stop reading for a drink of water. Luanne Rice creates a thrillingly compelling tale of common cruelty, high ambition, and the courage it takes to oppose them. Well done!" -Barbara O'Neal, Wall Street Journal and USA Today bestselling author of When We Believed in Mermaids

"Every family has secrets, but in Luanne Rice's clever thriller, The Shadow Box, the truth won't set you free-it will put you in a shallow grave…particularly if you live in the posh Connecticut enclave of Catamount Bluffs, where corruption, kidnapping, and murder are only a few of the community's hidden sins." -Lee Goldberg, #1 New York Times bestselling author