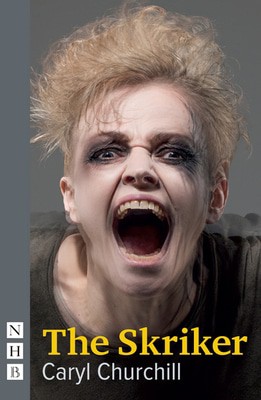 'Long before that, long before England was an idea, a country of snow and wolves where trees sang and birds talked and people knew we mattered.'

Caryl Churchill's The Skriker is an extraordinary collision of ancient fairytale and fractured urban England. This edition of the play was published alongside its revival at the 2015 Manchester International Festival.

In a broken world, two girls meet an extraordinary creature. The Skriker is a shapeshifter and death portent. She can be an old woman, a child, a young man. She is a faerie come from the Underworld to pursue and entrap them, through time and space, through this world and her own.

The Skriker was originally produced at the National Theatre, London, in 1994. It was revived at the Royal Exchange Theatre, Manchester, in 2015, as part of the Manchester International Festival, starring Maxine Peake, directed by Sarah Frankcom and featuring specially commissioned music by Nico Muhly and Antony of Antony and the Johnsons.

Here's what you say about
The skriker - Caryl Churchill.

'Unwholesome, hypnotic and born in the dark... spellbinding'