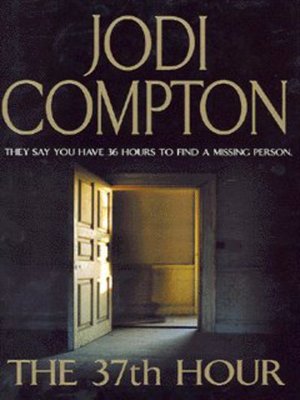 Sarah Pribek is a police officer in Minneapolis' Missing Persons department. Her department, always small, is down to two people since the brutal rape and murder of her partner Genevieve's teenage daughter. Everyone knew who the killer was because the daughter told them before her death, but he got off on a technicality, and Genevieve, after months of grief leave, is still paralysed by anger and her sense of betrayal.

Sarah is married to Shiloh, another police officer, a sexy man of mystery and few words, who is about to go to Quantico for FBI training. But he never shows up and Sarah is forced to conduct a Missing Persons search for her own husband. It takes her to his family where she hears of a sister she never knew he had, to New Mexico, where she herself grew up, and finally back to Genevieve, where all the threads of this brilliantly told novel come together.

Here's what you say about
The 37th hour - Jodi Compton.

Jodi Compton is from Northern California, but lived for three years in Minneapolis, Minnesota, the main setting for her novels. She has worked for the Minneapolis bureau of the Associated Press, and as a sub-editor at a newspaper on California's central coast. In the latter position, she closely followed crime and courts news on the wires, and during this time wrote her first novel, THE 37TH HOUR. The sequel, SYMPATHY BETWEEN HUMANS was published in 2005.

'A dazzling debut . . . Watch this writer. She does it all: plots intelligently, writes elegantly, and creates characters who compel attention the old-fashioned way - by making you believe in them.' - Kirkus

'Compton has written an exceptional first novel. Sarah, Genevieve and Shiloh are all flawed and credible characters who are thrust into thorny situations and forced to make difficult moral choices . . . There is a dark vein in the story underpinning the suspense, and the denouement is truly shocking and leaves us wondering what will become of them all. Compton is working on a sequel - let's hope she writes fast.' - Manchester Evening News

'A gripping piece of storytelling that gets better the deeper the reader gets into it. This could easily hit the bestseller lists. Superb' - Independent on THE 37TH HOUR

'How well do you really know the one you love? Jodi Compton raises that disquieting question in her fine debut novel, THE 37TH HOUR (Delacorte, $21.95), an intelligent and challenging thriller that unsettles the mind of its heroine by undermining her faith in her husband. Sarah Pribek, a tall, athletic and seemingly nerveless detective with the Hennepin County Sheriff's Department, has been married for just two months to a Minneapolis police officer named Mike Shiloh when he vanishes while on his way to Quantico for F.B.I. training. Ignoring the probability that her sexy, enigmatic spouse has simply walked out on her, Sarah investigates his disappearance as she would any other missing-person case, following a trail that takes her back to his family roots in Utah and reveals a person she never knew.

Compton dignifies her characters by treating them like complex adults whose problematical relationships can't be resolved by straightening out a few loose facts. ''Everything I knew was wrong,'' Sarah says, after discovering the ''shadow self'' her husband couldn't bring himself to show her. With a murderer at large and Sarah working on her own in the dark, the suspense may be killing, but it isn't cheap. It's the profound terror of knowing you don't know a thing.' - New York Times on THE 37TH HOUR

Nail-biter of a debut novel . . . Compton skillfully weaves together strands of Pribek's life--her husband's disappearance, her best friend's grief over a murdered daughter, and her own foray into saving a suicidal teen--into a complex, shocking whole. From the first scene--a teenage girl teetering on a railway trestle over the Mississippi--to the harrowing resolution, Compton uses suspense as a powerful propellant.
Booklist

Nail-biter of a debut novel . . . Compton skillfully weaves together strands of Pribek's life . . . into a complex, shocking whole. From the first scene--a teenage girl teetering on a railway trestle over the Mississippi--to the harrowing resolution, Compton uses suspense as a powerful propellant.
Booklist

'A promising debut from Compton, tautly-written, with strong characters and a healthy dose of twists and turns' - York Evening Press

'The dialogue is sharp, the plotting strong and there is just a hint in the vocabulary of a bit of extra depth.' - Dumfries & Galloway Standard

'THE 37TH HOUR is well-written, intelligent, suspenseful and surprising, and this is the first book I've read in a long while that I simply could not put down.' Deadly Pleasure

Readers looking for perky heroines with sassy girlfriends and humorous man problems would best be advised to seek their mysteries elsewhere. Compton's world is complicated, shadowy and violent, with little cheer and only the barest traces of hope and resolution. Look for Sarah to appear in a sequel, but don't expect it to be easy for anyone. This is first-class, serious crime fiction.
Publishers Weekly