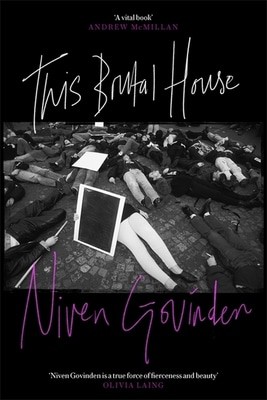 GUARDIAN MUST READ BOOKS OF 2019

'Vivid prose reinventing ideas of motherhood, belonging and taking us into the community of drag balls and protest, both personal and political' Jenni Fagan

'A novel of rare intensity and sustained passion, This Brutal House shines a light on lives marginalised and magnificent, and asks the pressing question: what would you do to stand up for your truth?' Stephen Kelman

'Tremendously powerful and illuminating. It held me captive in the best way. A clarion call to action from a criminally gifted writer' Irenosen Okojie

'Like the best drag acts, This Brutal House leaves its reader full of a powerful, protesting energy' Irish Times

On the steps of New York's City Hall, five ageing Mothers sit in silent protest. They are the guardians of the vogue ball community - queer men who opened their hearts and homes to countless lost Children, providing safe spaces for them to explore their true selves.

Through epochs of city nightlife, from draconian to liberal, the Children have been going missing; their absences ignored by the authorities and uninvestigated by the police. In a final act of dissent the Mothers have come to pray: to expose their personal struggle beneath our age of protest, and commemorate their loss until justice is served.

Watching from City Hall's windows is city clerk, Teddy. Raised by the Mothers, he is now charged with brokering an uneasy truce.

With echoes of James Baldwin, Marilynne Robinson and Rachel Kushner, Niven Govinden asks what happens when a generation remembered for a single, lavish decade has been forced to grow up, and what it means to be a parent in a confused and complex society.

Here's what you say about
This brutal house - Niven Govinden.

Niven Govinden is the author of four previous novels, most recently All The Days And Nights which was longlisted for the Folio Prize and shortlisted for the Green Carnation Prize. His second novel Graffiti My Soul is about to go into film production. His third novel Black Bread White Beer won the 2013 Fiction Uncovered Prize. He was a judge for the 2017 4th Estate/Guardian B4ME Prize.

As we await the second season of the TV drama Pose, the award-winning author Govinden brings us a timely queer protest novel set in the drag ball community of New York City. Vivid and poetic, the story explores
belonging, tolerance and what it means to be a parent in a confused and complex society
Sunday Times

[A] vibrant novel . . . Acerbic, encompassing, funny and mounting towards the spiritual, Govinden's book shows the complexity of drag balls and queer life. This is an important, and in places an experimental book, full of spark and wisdom. Its tone is in places elegiac, in others vibrant. Like the best drag acts, This Brutal House leaves its reader full of a powerful, protesting energy
Irish Times

Queer ball culture in New York has been explored recently in the TV show Pose, and in This Brutal House, Niven Govinden offers a different perspective, turning the focus away from the glamour of the fabulous outfits and music. On the steps of New York's City Hall, five Mothers sit in silent protest. The guardians of the queer vogue ball community, they opened their hearts and homes to countless lost Children, providing them with safe spaces where they could be themselves. But now, the Children are going missing, and the authorities don't care. Watching the Mothers' protest is Teddy, a city clerk raised by the Mothers who is now charged with brokering an uneasy truce
Stylist

A tale of voguing and protest . . . At the heart of [This Brutal House] are the twin concepts of reality and 'realness', an artificiality better than the real thing that is the highest accolade of the vogue walk. Reality is biological mothers rejecting their sons because of their sexuality; realness is the nurturing, scolding Mothers. Realness points out the hypocrisy of a city where the police neither protect nor serve, and public services are extended only to those deemed worthy of them
Guardian