To Timbuktu for a haircut - Rick Antonson 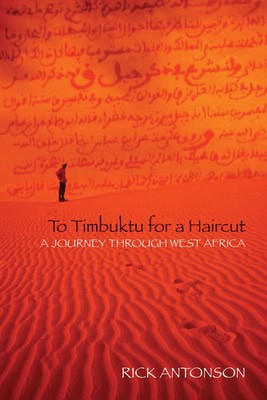 Historically rich, remote, and once unimaginably dangerous for travellers, Timbuktu still teases with "Find me if you can."

Rick Antonson's encounters with entertaining train companions Ebou and Ussegnou, a mysterious cook called Nema, and intrepid guide Zak all make you want to pack up and leave for Timbuktu tomorrow.

As Antonson travels in Senegal and Mali by train, four-wheel drive, river pinasse, camel, and foot, he tells of fourteenth-century legends, eighteenth-century explorers, and today's endangered existence of Timbuktu's 700,000 ancient manuscripts in what scholars have described as the most important archaeological discovery since the Dead Sea Scrolls.

Think Eric Newby's A Short Walk in the Hindu Kush or Redmond O'Hanlon's Into the Heart of Borneo and you begin to see what kind of writer Rick Antonson is. To Timbuktu for a Haircut combines wry humour with shrewd observation to deliver an armchair experience that will linger in the mind long after the last page is read.

Here's what you say about
To Timbuktu for a haircut - Rick Antonson.

Rick Antonson was president and CEO of Tourism Vancouver. Author of To Timbuktu for a Haircut and Route 66 Still Kicks, he entwines travel, history, and memoir in books about extraordinary places, the lands around them, and the people who call them home. He lives in Vancouver.

From a ride up the River Niger to an open-air music festival in the desert, from the sudden close friendships that bloom during such travel to the machinations of an unscrupulous tour coordinator who seems intent on foiling his travel goals at every juncture, Antonson handles the joys and occasional frustrations of his trip in vivid, straightforward prose and with a wry sense of humour.
Vancouver Sun

...nicely embroidered with local tones and textures, a regional history of West Africa, the Tuareg people and accounts of early European exploration.

Anyone interested in traveling to Africa should put Antonsons book on the list, right after malaria tablets.

Antonson's (story) is engagingly real, laying bare his frustrations and doubts. A month of travel might not seem like enough to stretch into a whole book, but Antonson's storytelling flows so well that the blow-by-blow account never gets tedious.

For this trip, Antonson decided against his usual air travel and instead made the journey on the ground - by train, boat, car, camel and foot. The result, as recounted in his impressive new book, To Timbuktu for a Haircut, is a quixotic quest, alternately funny and thought-provoking.
Africa Travel Monthly

Antonson's trek, via goat and donkey trail, to his guide Zak's home region of Dogon is a sweet story of bonding and cultural discovery. To Timbuktu for a Haircut is a good read.

Antonson combines wry humour with shrewd observation to deliver an armchair experience to the elusive Timbuktu that will linger long after the last page is read.

Like much of the most rewarding travel literature, Mr. Atonson's narrative turns out to be more revealing of the terrain travelled than of the intended destination.

Antonson handles the joys and occasional frustrations of his trip in vivid, straightforward prose and with a wry sense of humour ... he manages to strike the perfect balance between the journey and the traveller.

This trip is for all of us armchair voyagers. We're left with the understanding that Timbuktu is 'more a passage than a destination, more a pilgrimage than a journey.

Reading this book makes you feel like this might be your experience if you attempted the trip yourself. It's good beach reading for those who will probably never touch the sands of the Sahara - at least not yet.

Readers come away with a heightened sense of the history and social dynamics of West Africa. They're given vivid mental pictures of Antonson's experiences.

It is the journey, not the destination, that matters in this absorbing book.

The book is full of humour and insights gained from a personal voyage of discovery.

To Timbuktu for a Haircut ... is honest, thought-provoking and funny.

Antonson entertains without boring us with his inner demons and without the 'us and them' cynicism of some travel writers.

This is not a story written to glorify a modest, modern adventure - it is about closing old doors and opening new ones.

...he assumes the role of a serious traveller, the kind that can turn out a book such as this one, relaying the story of a rough and rugged journey ... while, at the same time, providing the necessary historical, geographical and cultural context, expressed with charm and sensitivity.

.Antonson heads out, first by tracking down a veritable ghost train almost as mythic as the city itself, running from Dakar, Senegal, to Bamako, Mali.
His obsession is palpable.
I felt the need to know what lay ahead as much as he did.
Type
BOOK
Keyword Index
Senegal - Description and travel.|Mali - Description and travel.
Country of Publication
Ontario
Number of Pages
256