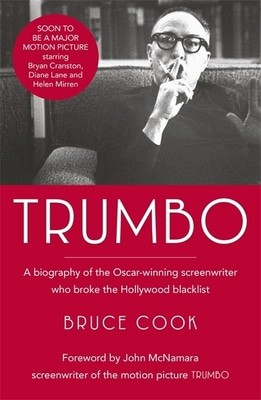 NOMINATED FOR OSCAR, BAFTA AND GOLDEN GLOBE AWARDS (BRYAN CRANSTON, BEST ACTOR)
Dalton Trumbo was the central figure of the infamous 'Hollywood Ten,' the screenwriters who, during the McCarthy era, were charged by the House Committee on Un-American Acitivities for their associations with the Communist Party. Due to their refusal to cooperate during the investigation, Trumbo and his fellow screenwriters were declared in contempt of Congress and were ultimately blacklisted from Hollywood and some were even jailed. Although Trumbo was one of several hundred writers, directors, producers, and actors who were deprived of the opportunity to work in the motion picture industry from 1947 to 1960, he won an Oscar under the pseudonym Robert Rich for The Brave One in 1956, and he was the first to see his name on the big screen again in 1960 with Exodus, one of the year's biggest movies.
All his life Trumbo was a radical of the homegrown, independent variety. From his early days in Colorado, where his grandfather was a county sheriff, to his time in Los Angeles, where he organized a bakery strike and was even a bootlegger, to his time as an author when he wrote the powerful pacifist novel Johnny Got His Gun, to his heyday as a top-paid (and frequently broke) Hollywood screenwriter-where his credits include Roman Holiday, Spartacus, Papillon, Lonely Are the Brave, Thirty Seconds Over Tokyo, The Brave One, and Kitty Foyle-his life rivaled anything he had created.
Written with Dalton Trumbo's full cooperation, at a moment when he himself did not know how much time he had left, Trumbo is a candid tale of a colorful figure who was at the epicenter of a tumultuous period in recent American history.

Here's what you say about
Trumbo - Bruce Cook.

Bruce Cook (1932-2003), veteran critic, journalist, and author, originally wrote this biography with Dalton Trumbo's full cooperation in 1976.
In his lifetime Cook wrote a total of 23 books, both fiction and nonfiction, including eleven mystery novels featuring
the real-life historical figure of Sir John Fielding, magistrate of the Bow
Street court during the latter half of the 18th century, and a crime fiction series featuring LA private detective Chico Cervantes. Cook's last completed novel, Young Will: The Confessions of William Shakespeare, was published posthumously.
Born in Chicago, Bruce Cook lived in Los Angeles and Paris with his wife, the violinist Judith Aller.

What a relief... to read Bruce Cook's Trumbo, a book of clarity, probing intelligence, and considerable grace. Trumbo was a true original. His life has the chronicler it merits.
Nat Hentoff

A gossipy, anecdotal narrative that is fascinating reading
Publishers Weekly

He wrote a brilliant novel and a number of very good movies, and he demolished the Hollywood blacklist almost single-handed, but his greatest achievement was just being the incomparable Trumbo. Bruce Cook has captured the wit, intelligence, and unpredictability that made him one of the truly original people of our time
Ring Lardner Jr, two-time Academy Award-winning screenwriter (WOMAN OF THE YEAR and MASH)

As a study of life under the blacklist the book is superb... Essential reading for anyone interested in either the cinema or recent American history
Library Journal

PRAISE FOR THE FILM TRUMBO
'a cracking good story, and Cranston does a great job portraying a man who made great sacrifices for his principles'

the hugely entertaining, revealing and powerful portrait of this great screenwriter... an almost bigger-than-life colorful movie about the movies. A screen triumph for all involved, it is especially Bryan Cranston's magnificent work in the title role that towers over everything.
Deadline

Bryan Cranston finally translates his critical acclaim for Breaking Bad into an Oscar-caliber performance in darkly comic Trumbo, playing an eloquent, witty screenwriter who bucked the Hollywood blacklist and triumphed... a
highly entertaining biopic... Director Jay Roach (Meet the Parents) may seem an unlikely fit for the material, but as Martin Ritt's blacklist comedy The Front (starring Woody Allen) showed and Trumbo reminds us, sometimes comedy can be the best weapon against demagogues

Among movies about old moviemakers, Trumbo works better, and has more to say about the world at large, than My Week With Marilyn orHitchcock... Come for the smooth supporting turns by Louis C.K. and Alan Tudyk, the impersonations of icons like John Wayne and Douglas (played with chin-y gusto by Dean O'Gorman) and for Cranston, who fills the air with craggy, growly authority. Stay for the listless yet vital lesson in democracy.
Time

What makes the movie work are the lively performances, both from the supporting cast and from Cranston
Hollywood Reporter

a powerhouse Bryan Cranston... Cranston plays the hell out of Dalton Trumbo... Kudos to director Jay Roach for not wallowing in misery. His movie is bracing and buoyant when Trumbo takes on gossip gorgon Hedda Hopper (a wicked Helen Mirren) and writes cheapies for the King brothers (Stephen Root and a hilarious John Goodman). When Kirk Douglas hired Trumbo to write Spartacus in 1960, the Commie witch hunt was exposed as the sham it was. Witch hunts haven't gone, they've gone global (ask the folks at Charlie Hebdo). Cranston shows us there's nothing retro about watching Trumbo in his glory, speaking truth to power.
Rolling Stone

a timely tale of political paranoia and personal pain... Mirren, in Hopper's extravagant wardrobe, proves once and for all that she is the best at a truly underappreciated, classic Hollywood skill: wearing a hat.
Los Angeles Times

Bryan Cranston owns Trumbo, both character and film, from first word to last. The picture is an incredibly fun leap into a time-machine back into old-fashioned Hollywood, whose good and bad characteristics are twisted to be both endearing and entertaining. But more than this, its fiery central character is a big symbol of something that's missing in present-day Hollywood. Where are the Dalton Trumbos of today?
IndieWire

an important reminder of how democracy can fail ... and the strength of character it takes to fight the system
Variety