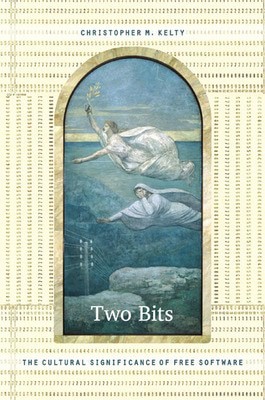 In Two Bits, Christopher M. Kelty investigates the history and cultural significance of Free Software, revealing the people and practices that have transformed not only software but also music, film, science, and education. Free Software is a set of practices devoted to the collaborative creation of software source code that is made openly and freely available through an unconventional use of copyright law. Kelty explains how these specific practices have reoriented the relations of power around the creation, dissemination, and authorization of all kinds of knowledge. He also makes an important contribution to discussions of public spheres and social imaginaries by demonstrating how Free Software is a "recursive public"-a public organized around the ability to build, modify, and maintain the very infrastructure that gives it life in the first place.

Drawing on ethnographic research that took him from an Internet healthcare start-up company in Boston to media labs in Berlin to young entrepreneurs in Bangalore, Kelty describes the technologies and the moral vision that bind together hackers, geeks, lawyers, and other Free Software advocates. In each case, he shows how their practices and way of life include not only the sharing of software source code but also ways of conceptualizing openness, writing copyright licenses, coordinating collaboration, and proselytizing. By exploring in detail how these practices came together as the Free Software movement from the 1970s to the 1990s, Kelty also considers how it is possible to understand the new movements emerging from Free Software: projects such as Creative Commons, a nonprofit organization that creates copyright licenses, and Connexions, a project to create an online scholarly textbook commons.

Here's what you say about
Two bits - Christopher M Kelty.

"I think Kelty's book deserves a wide readership - especially among nerds trying to make sense of the past decade, let alone to prepare for the next one." - Scott McLemee, Inside Higher Ed

"Considering the scope of the subject matter, the book is not especially steeped in technical jargon, and is therefore highly readable for a wide and varied audience. Contrary to first impression this book is not specifically directed towards geeks, software code authors, or other computer nerds, although these individuals will find the book informative and inspiring. It also should be read by all those who have positions of influence such as teachers, cultural studies academics, government decision/policy makers and of course members of the legal profession." - Rob Harle, Leonardo

"In this study of the Free Software/Open Source movement, Christopher Kelty provides a fascinating look into a world that may initially seem arcane to those outside the field, but which illuminates many connections between 'geek' culture and the wider world as well. . . . In a moment marked by Wikipedia and Facebook, new connections and forms are emerging every day. Two Bits reaches beyond the technicalities of the Free Software movement to help provide productive ways to think about these non-traditional communities as they are only beginning to imagine themselves." - Erica A. Farmer, Anthropological Quarterly

"Two Bits describes the way those who work and play with Free Software themselves change in the process-engendering what Kelty calls 'recursive publics'-social configurations that realize the Internet's non-hierarchical, ever-evolving, and thus historically attuned logic, creatively updating the types of public spheres previously theorized by Habermas and Michael Warner, among others. Two Bits does something similar, pulling readers into an experimental (ethnographic) mode that draws out how Open Source movements have garnered the momentum and significance they have today. The book-on paper and online-quite literally shows how it is done, itself embodying the standards that make Free Software work. Two Bits is critical reading, in all senses."-Kim Fortun, Rensselaer Polytechnic Institute

"I know of no other book that mixes so beautifully a deep theoretical understanding of social theory with a rich historical and contemporary ethnography of the Free Software and free culture movements. Christopher M. Kelty's book speaks to many audiences; his message should be understood by many more."-Lawrence Lessig, Stanford Law School