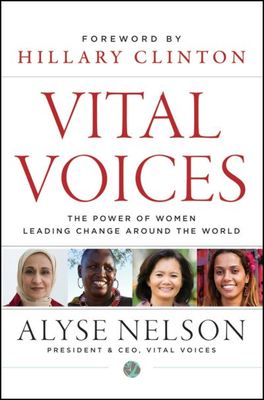 How women around the world are leading powerful change


Women's progress is global progress. Where there is an increase in women's university enrollment rates, women's earnings, and maternal health, and a reduction in violence against women, we see more prosperous communities, better educated, healthier families, and the preservation of equal human rights. Yet globally, women remain the most consistently under-utilized resource. Vital Voices calls for and makes possible transformative leadership around the world.

In Vital Voices, CEO Alyse Nelson shares the stories of remarkable, world-changing women, as well as the story of how Vital Voices was founded, crossing lines that typically divide. For 15 years, Vital Voices has brought together women who want to enable others to become change agents in their governments, advocates for social justice, and supporters of democracy. They equip women with management and business development skills to expand their enterprises and create jobs in their communities. Their voices, stories, and hard-earned lessons-shared here for the first time-are deeply authentic and truly vital.

Through the firsthand accounts of trail-blazing leaders, Vital Voices introduces unforgettable, inspiring women who are shaping our world.

Here's what you say about
Vital voices - Alyse Nelson.

Alyse Nelson is president and chief executive officer of Vital Voices Global Partnership. A co-founder of Vital Voices, Alyse has worked with women leaders since 1996 to develop mentoring and training programs in over 140 countries and has interviewed more than 200 international leaders. She completed her graduate degree work at Fletcher School of Law and Diplomacy at Tufts University, and she lives in Washington, D.C.

Vital Voices Global Partnership, founded by Hillary Rodham Clinton, is the leading nongovernmental organization that identifies, trains, and invests in emerging women leaders, enabling them to create a better world for us all. Learn more at www.vitalvoices.org.

"In this compelling new book, Alyse Nelson shares the stories of the remarkable women who have motivated her work at Vital Voices. For anyone who wants our world to live up to the promises of the twenty-first century, look no further than these determined agents of change for blueprints on courageous leadership."
-Bill Clinton, 42nd President of the United States

"This timely book tells the story of a movement that is transforming our world and of an organization-Vital Voices-is clearing the path.Its message is about more than equality, it's about leadership, justice, and hearing those who in prior generations possessed only a single right-to remain silent.If you are looking for inspiration about what is possible, and for a challenge about what is still necessary, here is your guide."
-Madeleine K. Albright, former U.S. Secretary of State


"I have been humbled and inspired throughout my life by the determination of African women and women in other parts of the developing world who are committed to bettering their families and their communities. The power and possibility of women's leadership are captured in this book's innovative model. There has never been a more fitting time for the world to embrace a new brand of leadership by embracing thepower and possibility of women worldwide."
-H.E. Ellen Johnson Sirleaf, President of Liberia and 2011 Nobel Peace Prize Laureate

"From the poorest villages to the highest government offices, women are leading the way in tackling humanity's biggest challenges. Alyse Nelson's Vital Voices imagines what's possible if we can fully tap the unique leadership potential of all women and girls. This book is essential reading for anyone interested in building a better world."
-Melinda French Gates, co-chair, Bill & Melinda Gates Foundation

"Over the next 25 years, nothing will do more to build a more peaceful, more prosperous, and more sustainable world than the empowerment of women and girls. As an innovative and collaborative leader, Vital Voices is making a profound and lasting difference for the better, as the stories in this book clearly demonstrate."
-Muhtar Kent, chairman and CEO, The Coca-Cola Company

"This powerful book tells the story of a pioneering organization and shows us what is possible when we invest in transformational leaders-from dissidents to entrepreneurs, these women motivate us and change lives."
-Tina Brown, editor-in-chief,Newsweekand The Daily Beast

"Vital Voices is a vital read. The world is changing and in the places where the most progress is happening, women are leading the charge. Alyse Nelson empirically states the case that when women are given opportunities, they seize them and ignite positive changes in their communities and even their countries. At a time of such universal economic uncertainty, investing in women can make all of the difference."
-Lisa Ling, executive producer and host, Our America