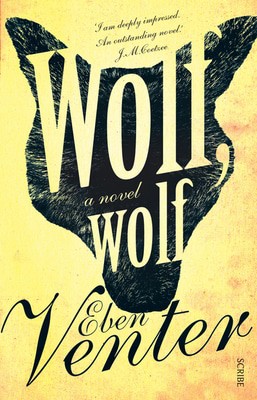 How should a man be? Mattie Duiker is trying very hard to live up to his dying father's wishes. He is putting aside childish things, starting his first business serving healthy take-away food to the workers in his district of Cape Town. His Pa is proud.

Pa's peacocking days as a swaggering businessman are done, but even as the cancer shrivels and crisps him, the old man's ancient authority intensifies as it shrinks, like Mattie's own signature sauce. Pa haltingly prepares his son for life without him, and himself for life without a male heir. And, while the family wrestles with matters of entitlement and inheritance, around them a new South Africa is quietly but persistently nudging its way forwards.

Wolf, Wolf is a novel of old rigid states and new unfinished forms, of stiff tolerance and mournful nostalgia. With uncommon sensitivity to place, time, and sex, Eben Venter reveals himself to the world outside his homeland as one of its most astute and acute observers, giving shape in story to some of the sea-changes of our time, in the manner of Coetzee and Roth.

Here's what you say about
Wolf, wolf - Eben Venter.

Eben Venter is the critically acclaimed author of Wolf, Wolf(Scribe, 2015). Hewas raised on a sheep farm in Eastern Cape, South Africa, and migrated to Australia in 1986. He has won numerous awards for his work, and currently holds an honorary appointment as professional associate in the Institute ofEnglish in Africa (ISEA) at Rhodes University.

'I am deeply impressed. An outstanding novel.'

'Wolf, Wolf is a deeply felt and deeply disturbing story. Like all the best dispatches from the modern world, it takes you to places you never expected to go - and challenges you to learn from what you find there.'

'Wolf, Wolf is a novel of heart-stopping humanity, a chilling portrait of men shattered by the disappointments of inheritance and the brutality of the way we live now.'

Rebecca Gowers, author of When to Walk

'A stark study of arrested ethnicity ... Eben Venter has lived in Australia for decades but exile has sharpened his perspective. Wolf, Wolf is a mesmerising novel.'

'At the heart of Wolf, Wolf is the confluence of two recurrent tropes in recent South African fiction. The first, which explores the post-apartheid transition in an obviously allegorical way, features the return of an expatriate child, often to a parent's deathbed, sometimes to the farm ...The second is that of queer self-discovery, often in the context of familial or communal resistance ... In Wolf, Wolf, Venter's harnessing of both tropes serves to explore the cost of white privilege and the burden of inheritance or its expectation in South Africa's precarious present ... Venter's brave, lyrical novel offers neither consolation nor nostalgia, only a doomed sense of the inevitability of an accounting to come.'

'What's striking about Venter is how thoroughly he has undone his own cultural and political formation as an "opregte Afrikanerseun" from a farming background: today he is in the front ranks of writing that "queers" the establishment - both the current one and its apartheid predecessor.
In my reading, Wolf, Wolf is a finely probing understanding, in the form of imaginative storytelling, of current social and human complexities.'

'…Venter's artistry affords a richer pleasure than texts aiming at instant gratification.
Nothing in his sustained and careful exposition prepared me for the power of its unravelling in the last sixty pages. This is a masterful novel about people who lose control of themselves and their world, in the most literal and unsettling sense of the term.'

'The honesty, the terror, the merciless and yes, the sheer nakedness of the characters makes Wolf, Wolf a book that has changed my life.'

'Very well-written ... Venter has a punchy, vivid style, with a lot of unusual sentence constructions that flow really well together ... A rewarding and satisfying read.'