All OFFERS
All Mobile Phones
All iPad & Tablets
All Smartwatches
All MacBook & Other Tech
All Rental
All Gaming
All Books
All DVD
All Blu-ray
All Music
All Certified Refurbished
Hurry, item low in stock!
A diagnosis of dyslexia can cause anxiety and confusion. This illuminating book shares triumphant stories of people in Wales who have found creative ways of getting to grips with the condition. Some even say that their dyslexia helped them to be more successful. 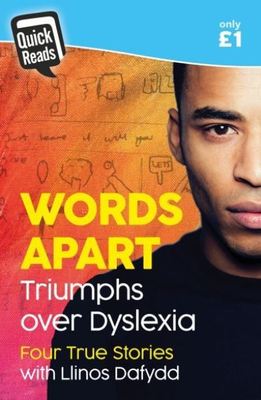 A diagnosis of dyslexia can cause anxiety and confusion. This illuminating book shares triumphant stories of people in Wales who have found creative ways of getting to grips with the condition. Some even say that their dyslexia helped them to be more successful.

From actor to poet, child to mum - share these inspiring accounts and learn more about how to tackle and succeed with dyslexia. The author and publisher wish to extend their gratitude to Dyslexia Cymru for supporting this book and sharing their expertise.
10% of royalties are donated to Dyslexia Cymru.
Publisher: Rily

Words Apart - Triumphs Over Dyslexia is a must-read for anyone who has dyslexia or is close to someone who has it, and for anyone seeking greater understanding of this common condition, which has the potential to severely distort the lives it touches.

Of the six voices in this slim, easy-to-read book, three stories are first-hand accounts of the experience of being dyslexic, the fourth comes from the mother of a son with dyslexia, and the final two chapters offer advice from someone who works with people who are dyslexic.

In 'The doodles are my life', Cardiff-born actor and Casualty character, Lloyd Everitt, tells his story. As the title suggests, Everitt has developed his own picture-based language to help him read and learn scripts: 'I draw what I have to learn,' he says. When he was a child, no one realised he had dyslexia, and he lists the coping strategies he devised for himself. Mental health problems caused by the stress of coping are now in the past. His writing is still full of spelling mistakes, but the skills he has learnt have made amazing, creative things possible. 'Self-belief is the key, the rewards will come'.

Like Everitt, complementary therapist and mother-of-two Llinos Hallgarth was late being diagnosed and, apart from one exceptional experience, she has mostly negative memories of her time at school, where she struggled to read and write. But her listening skills have stood her in good stead and she finds game-playing a useful tool. She also describes the other-awareness skills she has developed, with differences from others leading to innovative solutions and mental dexterity. Hallgarth embraces her personal 'oddities' and now sees her dyslexia as having both pluses and minuses, as a blessing rather than a curse. For her, it is stubbornness, perseverance, organisation and logic that enable her to complete her work and overcome problems. Her conclusion: anything is possible if you work at it.

In the third story, Catherine Jones talks about her fourteen-year-old son, Samuel, who has both dyslexia and Irlen Syndrome, which is a problem with the brain's ability to process visual information. She speaks passionately of huge struggles with the school system, with the stereotyping of boys being used as an excuse for poor support. But, thanks to her perseverance, the situation improved, and her advice to other parents is to fight, fight, fight, and never give up. She also offers some real positives: Samuel is determined and considerate; he is good at drawing and sketching, and he is planning to be a graphic designer. Dyslexia drives his ambition, which is also key in the story of award-winning poet and TV presenter, Aneirin Karadog: 'Dyslexia certainly hasn't stopped me doing what I want to do in my life, and doing it successfully.' When he got the diagnosis at university, he understood it was a blameless condition, but that it was also a label for life. He found poetry easier than novels and the strict cynghanedd form of Welsh poetry easiest. He sees dyslexia as a sub-language in his system. Most importantly, he says, 'Don't let it hinder anything you want to achieve in life.'

These inspirational and uplifting stories are followed by two final chapters offering practical advice and information. Dyslexia, a neurological condition, is described along with its symptoms. According to special educational needs coordinator Mike Furnham, the individual supporting a dyslexic child at school is of key importance: 'the impact on a child's self-esteem is significant and long-lasting.' So never forget that many famous, creative and successful people have been dyslexic, including Albert Einstein, Leonardo da Vinci, Steve Jobs and Pablo Picasso.

This valuable book does not shy away from the difficulties, both personal and systemic, but concludes that given good support, self-belief, good skill development, effective coping strategies and perseverance,
Books Council of Wales