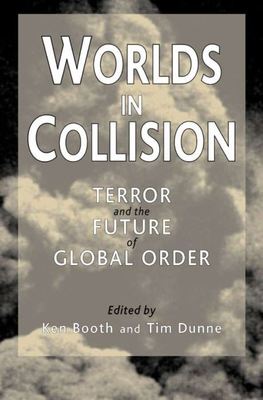 Bringing together an outstanding group of thinkers, Worlds in Collision is the essential book for understanding the debate about the future of global order in the wake of international terrorism and the war in Afghanistan. For years to come, if not decades, the 'war on terrorism' will be the defining paradigm in the struggle for global order. When the victim of such horrific terror attacks happens to be the world's only superpower, the agenda is set for the future global order. This book, offering a comprehensive and provocative collection of viewpoints from leading intellectuals from a number of countries, will help readers understand the ways in which our worlds collided on September 11, 2001. Not only does it comprehensively address the first phase of the war against international terrorism, the book also looks at the wider regional and global ramifications. Worlds in Collision is ultimately about more than the war on terrorism, it concerns itself with the possibilities for re-shaping global order on the basis of new kinds of politics.

'This provocative and timely collection contains rich diversity in both method and content. The average quality of contributions is remarkably high, and the best are gems.' - Henry Shue, Professor of Ethics and Public Life, Cornell University

This is a very timely and high quality collection of essays on the contexts, causes and consequences of September 11. Booth and Dunne have brought together a star-studded galaxy of authors - intellectuals, academics and thinkers who explore the myriad facets - terror, power, culture - of the attack on the twin towers from the viewpoints of international relations and international political economy. The essays are tightly argued and form a valuable collection for students, teachers, policymakers and policy watchers.' - Lord Meghnad Desai

'As we try to understand September 11, 2001, it would be hard to find a more diverse and interesting set of authors than those assembled here. Agree or disagree, you are bound to learn from them.' - Joseph S. Nye, Jr. author of The Paradox of American Power and former, Assistant Secretary of Defense

'This fascinating and well-written collection of essays provides abundant evidence that scholars sharply disagree not only about the causes of the September 11 terrorist attacks on the United States, but also about how best to combat the problem.' - John J. Mearsheimer, R. Wendell Harrison Distinguished Service Professor, University of Chicago

'Worlds in Collision is probably the most impressive academic symposium to appear since the World Trade Centre attack.' - The Age

'The editors have managed to garner contribution from a genuinely stellar group of scholars.' - Navraj Singh Ghaleigh, German Law Journal

'For all their academic orientations, the contributors have kept it both simple and palatable for the reader...the book's greatest strength is that it shifts the spotlight on to a range of questions that have been marginalized, sidelined and kept outside of policy discourse by governments across the world.' - Pranab Dhal Samanta, The Hindu

'As we try to understand September 11, 2001, it would be hard find a more diverse and interesting set of authors than those assembled here. Agree or disagree, you are bound to learn from them.' - Joseph S. Nye, Jr. author of The Paradox of American Power and former Assistant Secretary of Defense

'This fascinating and well-written collection of essays provides abundant evidence that scholars sharply disagree not only about the causes of the September 11 terrorist attacks on the United States, but also about how best to combat the problem.' - John J. Mearsheimer, R. Wendell Harrison Distinguished Service Professor, Political Science Department, University of Chicago

'Many of the usual intellectual suspects are included in this new collection of essays, marking out the theoretical and controversial battle lines of the first phase of the war against terrorism and passionately debating its future ramifications. A long list of distinguished contributors, including Chomsky and Fukuyama, provide a crucially global insight on topics as diverse as Peace, Poetry and Pentagonese, Desperately Seeking Bin Laden and Democracy and Terror in the Era of Jihad vs McWorld. - New Statesman