Zero and the one - Ryan Ruby 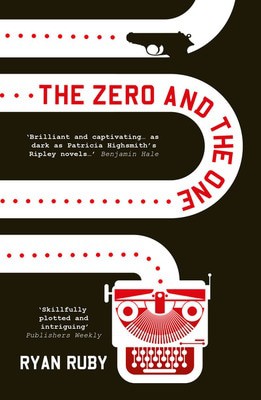 'Ryan Ruby has written a brilliant and captivating novel ... dark as Patricia Highsmith's Ripley novels, with ... a setting that reminds one of Evelyn Waugh, and ... texture that evokes P.G. Wodehouse. It's as sharp as a tack, and the pages turn themselves'--Benjamin Hale

A bookish scholarship student, Owen Whiting has high hopes of Oxford, only to find himself immediately out of place. Then he meets Zachary Foedern from New York. Rich and charismatic, Zach takes Owen under his wing, introducing him to a world Owen has only ever read about.

From Oxford to the seedy underbelly of Berlin, they dare each other to transgress the boundaries of convention and morality, until Zach proposes the greatest transgression of all: a suicide pact. But when Zach's plans go horribly awry, Owen is left to pick up the pieces and navigate the boundaries between illusion and reality to preserve a hold on his once bright future.

Ruby draws us in to a mesmerizing tale which swaps the loss of innocence for the power of secrets and manipulation. A complex and engaging story full of suspense, twists and complex characters, Ruby has blended philosophy and narrative seamlessly to create an unforgettable experience.

What Reviewers and Readers Said:

'The Zero and the One is brilliantly erudite, deeply engaging, and full of heart. Ryan Ruby has captured something surprising - the ineluctable sadness of youth' Lauren Elkin

'This is a rare book - a compulsively readable page-turner that is actually, unapologetically, smart' LA Review of Books

'A ferocious hybrid of a book: part novel of philosophy,part thriller, completely absorbing. It's the sort of book you read in a day -reminded, between gulps, of The Secret History and The Talented Mr. Ripley -and then spend months thinking about' Ben Dolnick

'A gripping, intellectually agile book that dresses like acoming of age narrative, but soon reveals itself to be something new, wholly original and philosophically rich. If you've ever read a crime novel and wished for a deeper answer to the mystery - an existential Whydunnit rather than a Whodunnit - then this masterful work by Ryan Ruby will thrill you, and give you much ominous food for thought' Alexandra Kleeman

'Beautifully written and minutely observed, The Zero and the One brilliantly encapsulates the agony and ecstasy of the search for meaning in late adolescence' Jenny Davidson

'The Zero and the One is a fast-paced, philosophical meditation on what qualifies as the worst crime one can commit' Booklist

Ryan Ruby was born in Los Angeles in 1983. He has written for The Baffler, Conjunctions, Lapham's Quarterly, n+1, and the Paris Review Daily among other publications, and has translated two novellas from the French for Readux Books. He lives in Berlin. Follow Ryan at www.ryanruby.info