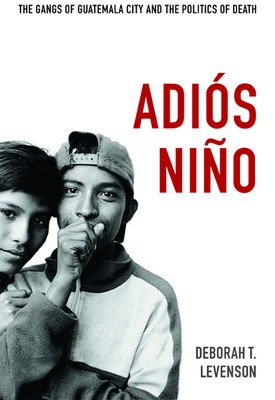 In Adis Nio: The Gangs of Guatemala City and the Politics of Death, Deborah T. Levenson examines transformations in the Guatemalan gangs called Maras from their emergence in the 1980s to the early 2000s. A historical study, Adis Nio describes how fragile spaces of friendship and exploration turned into rigid and violent ones in which youth, and especially young men, came to employ death as a natural way of living for the short period that they expected to survive. Levenson relates the stark changes in the Maras to global, national, and urban deterioration; transregional gangs that intersect with the drug trade; and the Guatemalan military's obliteration of radical popular movements and of social imaginaries of solidarity. Part of Guatemala City's reconfigured social, political, and cultural milieu, with their members often trapped in Guatemala's growing prison system, the gangs are used to justify remilitarization in Guatemala's contemporary postwar, post-peace era. Portraying the Maras as microcosms of broader tragedies, and pointing out the difficulties faced by those youth who seek to escape the gangs, Levenson poses important questions about the relationship between trauma, memory, and historical agency.

Deborah T. Levenson is Associate Professor of History at Boston College. She is the author of Trade Unionists against Terror: Guatemala City, 1954-1985 and a coeditor of The Guatemala Reader: History, Culture, Politics, also published by Duke University Press.

"A must-read account of how the gangs of Guatemala were shaped by war and politics. Chilling and important."-John M. Hagedorn, author of A World of Gangs: Armed Young Men and Gangsta Culture

"I was blown away by this book, by its originality, textured detail, and penetrating, multilayered analysis of the history of Guatemalan gangs. The most holistic work that I have read on so-called 'apolitical' gang violence in Latin America, it is at once deeply empathetic, even to people who have committed vicious acts, and sharply argumentative. Adis Nio will have a big impact on Latin American studies, urban studies, and violence and memory studies across the fields of history, anthropology, and sociology."-Greg Grandin, author of Fordlandia: The Rise and Fall of Henry Ford's Forgotten Jungle City and The Blood of Guatemala: A History of Race and Nation

"[An] extraordinary history of the gangs of Guatemala City.... Above all the ethnographic work of an oral historian, Adis Nio subtly weaves into its analytical fabric an eclectic array of theoretical voices, from Enrique Dussell to Michel Foucault."
Los Angeles Review of Books - Jeffery Webber

"[T]his is the book on gangs we need to read."
NACLA Report on the Americas - Naomi Glassman

"Deborah Levenson's Adis Nio is to date the most historically nuanced work on Guatemalan gangs…. Levenson's work earns a place on the essential reading list not only of scholars interested in gangs and Central America, but of all those interested in human rights and the effects of their systematic suppression in impoverished societies."
Human Rights Review - J. T. Way

"This book is a must read, not only for those who are interested in Guatemala…. I don't know that I have seen a better explanation of what happens when revolutions fail, or a better explanation for why Guatemala's contemporary youth gangs ought to be seen, as Levenson puts it, as 'orphans of the world' (98)."
Journal of the History of Childhood and Youth - Karen Dubinsky

"Adis Nio is simultaneously painful and important.... This riveting account is a particularly good book to teach, especially at the advanced undergraduate and graduate level: it grapples with many issues, and although it doesn't necessarily resolve them, it unmasks and demonstrates the rigors and some of the key components of the intellectual quest."
American Anthropologist - Jennifer L. Burrell

[A] tremendous achievement. Any scholar of Latin America, urban studies, youth, crime, postwar politics, or memory will find rich theoretical and methodological interventions here. Levenson packs much insight into this slim, elegant volume, offering a surgical exegesis of the relationships between history, violence, and trauma."
The Historian - Kristen Weld