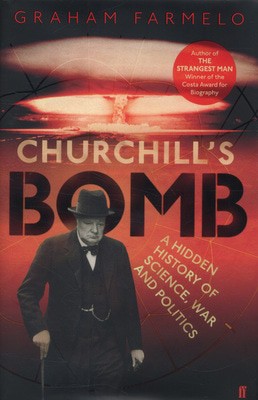 Churchill's Bomb - from the author of the Costa award-winning biography The Strangest Man - reveals a new aspect of Winston Churchill's life, so far completely neglected by historians: his relations with his nuclear scientists, and his management of Britain's policy on atomic weapons.

Churchill was the only prominent politician to foresee the nuclear age and he played a leading role in the development of the Bomb during World War II. He became the first British Prime Minister with access to these weapons, and left office following desperate attempts during the Cold War to end the arms race.

Graham Farmelo traces the beginnings of Churchill's association with nuclear weapons to his unlikely friendship with H. G. Wells, who coined the term 'atomic bombs'. In the 1930s, when Ernest Rutherford and his brilliant followers, such as Chadwick and Cockcroft, gave Britain the lead in nuclear research, Churchill wrote several widely read newspaper articles on the huge implications of their work.

British physicists, in 1940, first showed that the Bomb was a practical possibility. But Churchill, closely advised by his favourite scientist, the controversial Frederick Lindemann, allowed leadership to pass to the US, where the Manhattan Project made the Bomb a terrible reality. British physicists played only a minor role in this vast enterprise, while Churchill ignored warnings from the scientist Niels Bohr that the Anglo-American policy would lead to a post-war arms race. After the war, the Americans reneged on personal agreements between Roosevelt and Churchill to share research. Clement Attlee, in a fateful decision, ordered the building of a British Bomb to maintain the country's place among the great powers. Churchill inherited it and ended his political career obsessed with the threat of thermonuclear war.

Churchill's Bomb is an original and controversial book, full of political and scientific personalities and intrigues, which reveals a little-known side of Britain's great war-leader.

Here's what you say about
Churchill's bomb - Graham Farmelo.

Graham Farmelo is a By-Fellow at Churchill College, Cambridge, and an Adjunct Professor of Physics at Northeastern University, Boston, USA. He edited the best-selling It Must be Beautiful: Great Equations of Modern Science in 2002. His biography of Paul Dirac, The Strangest Man, won the 2009 Costa Biography Award and the 2010 Los Angeles Times Science Book Prize.

A story as gripping as it is elegantly argued ... a wonderful companion piece to one of the most authoritative books on this subject, Richard Rhodes's epic 'The Making of the Atomic Bomb'.
Financial Times - Lisa Jardine

An excellent book ... Farmelo is a splendid word-portraitist, and his book charts the odysseys, geographical as well as scientific, of the men who played a key role in developing the bomb ... authoritative and superbly readable.
Sunday Times - Max Hastings

Graham Farmelo's very fine book ... illuminates the nexus between science, politics, war, and even literature better than anything I have read for some time. The issues it raises are both eternal and especially pressing now. It is not yet Book of the Year time but this has to be a contender.
Independent - Peter Forbes

Splendid and original ... in interweaving the political and scientific, Farmelo succeeds in making the latter beautifully clear even to readers with scant background in the subject.
A W Purdue - Times Higher Education

Scrupulously researched and superbly written ... Churchill's Bomb is a powerful and moving contribution to literature about the 20th century and to biographical and historical writing.
Scotsman - Vin Arthey

Graham Farmelo is the author of an outstanding biography of Paul Dirac, the most eccentric of the 20th-century geniuses to whom we owe our understanding of the atom.Churchill's Bomb tells an even more dramatic story, and tells it brilliantly ... Farmelo ingeniously interweaves the narratives of the nuclear scientists, many of them Jewish refugees from Germany, with that of Churchill in war and peace
The Times - Daniel Johnson

Absorbing ... Farmelo's account of Churchill's atomic dreams perfectly captures the essence of the man and the science of the day.
Observer - Robin McKie

A riveting, powerful, and timely reminder that high politics is anything but rational. Graham Farmelo vividly reveals how Winston Churchill learned about atomic physics in the 1920s, warned about the imminence of nuclear weapons in the 30s, and yet, paradoxically, squandered Britain's lead in the field during the Second World War.
Roger Highfield, Science Museum executive, Daily Telegraph columnist, and bestselling science writer

What a brilliant and compelling book! Graham Farmelo sensitively and eloquently deconstructs the twists and turns of Winston Churchill's involvement with nuclear weapons over nearly half a century, setting this unfamiliar tale in the context of the turbulent times. At its heart are the ambiguities of the World War II relationship between a scientifically innovative but economically weakened Britain and the inexhaustibly energetic USA with unlimited resources.
Sir Michael Berry, University of Bristol

"An excellent book. Graham Farmelo draws on many sources to show how Churchill, his scientific adviser Frederick Lindemann, and a host of other scientists and politicians developed the atomic bomb.Churchill's Bomb brings these characters back to life with anecdotes, quotations, and personal sketches. But Farmelo's book does more than unfold the hopes, doubts, and fears engendered by the bomb: it illuminates the relationship between big science and modern democracy."
James W. Muller, University of Alaska, Anchorage

This is a fascinating book. Graham Farmelo offers a fresh and thoroughly researched history of the development of atomic weapons in his insightful and engaging account of Winston Churchill's failure to forge a partnership of equal exchange between Great Britain and the United States in the development of the bomb. Farmelo offers vivid vignettes of political and scientific personalities, with special attention to the widely disliked Oxford physicist Frederick Lindemann, who became Churchill's science and technology guru in the 1920s."
Mary Jo Nye, Professor of History Emerita, Oregon State University, and author of Michael Polanyi and His Generation