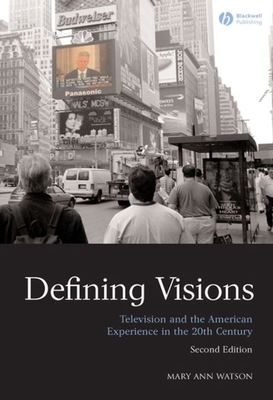 Defining Visions is a powerful narrative social history that examines television's rise as the great "certifying agent" in American life. This newly updated and fully revised edition extends its coverage to the end of the 20th century. It defines the "Television Age" as a discrete period in American history bracketed by monumental events-the triumph of the Allied victory of WWII and the devastation of 9/11.

Here's what you say about
Defining visions - Mary Ann Watson.

Mary Ann Watson is Professor of Electronic Media and Film Studies at Eastern Michigan University. She is author of The Expanding Vista: American Television in the Kennedy Years (1994) and has been a consultant to several museum exhibitions and documentary films. Watson serves on the editorial board of Television Quarterly and is a frequent contributor to its pages.

"In this engaging, old-fashioned look at television, Watson argues that television defined for Americans the social issues of race, gender, violence, sex, work, consumption, behavior, and values in the decades following WW II. The book delights with its engaging style, sometimes savoring of Variety. Include[es] new illustrations, bringing each chapter up to the present, and significantly expanding the epilogue. Highly recommended." Choice


"Once again one of our most eminent broadcast historians has produced a work that is both good history and good reading, and a brilliant and analytic integration of sources - many of them mined from heretofore unavailable material. This elegant history of television is a study of the box that changed history and its changing status in the era of the web with implications for democracy and society writ large."
Everette E. Dennis, Fordham Graduate School of Business, New York

"A really good book about the history of American television would, by necessity, also be a book about all of the most important social and cultural themes of the last half of the twentieth century. Defining Visions is that really good book."
Robert Thompson, Newhouse School of Public Communication, Syracuse University

Praise for the first edition of Defining Visions:

"Cogent and discerning assessment ... .A comprehensively revised second edition … . As one of our most astute media observers, Watson makes an estimable case."
Television Quarterly

"Watson's Defining Visions ably introduces the reader to television culture in an informative, often entertaining manner. ....Watson might well join the ranks of authors Neil Postman and Erik Barnouw...attracting those within and outside the academy. As it stands, Defining Visions will most likely find a receptive readership among undergraduates."
Robin R. Means, Journal of Popular Film & Television

"Especially versatile for teaching the influence of television on race, class and gender and presents a rich background for examining violence, advertising, character and democracy."
The Docket

"This refreshing approach--devoid of cultural studies--has an important strength: in revealing television as a powerful part of American life, not just an idle preference, it presents youthful readers with a view that contrasts with much they have heard about television. The book delights with its engaging style."